50%
Tweet
The goal is to custom-build tissues and organs for transplant, using the patient's own cells and 3D medical printers. 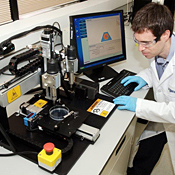 A San Diego company is developing technology to "print" artificial blood vessels for transplant. The initial goal: Create an arterial graft for use in coronary bypass surgery.

The long-term goal is to solve problems in medical therapy that can't be solved otherwise, especially in organ transplants, where tens of thousands of people are waiting for donated organs, said Keith Murphy, CEO of the company, Organovo.

"Building human organs cell-by-cell was considered science fiction not that long ago," said Fred Davis, president of Invetech, in a statement. "Through this clever combination of technology and science we have helped Organovo develop an instrument that will improve people’s lives, making the regenerative medicine that Organovo provides accessible to people around the world.”

Murphy said in a statement, "Scientists and engineers can use the 3D bio printers to enable placing cells of almost any type into a desired pattern in 3D.” He added, "Researchers can place liver cells on a preformed scaffold, support kidney cells with a co-printed scaffold, or form adjacent layers of epithelial and stromal soft tissue that grow into a mature tooth. Ultimately the idea would be for surgeons to have tissue-on-demand for various uses, and the best way to do that is get a number of bio-printers into the hands of researchers and give them the ability to make three dimensional tissues on demand.”

The technology works by using a robot to lay down cells in precise positions in three dimensions, accurate to within 20 microns. "It's similar to the way a laser printer prints by putting solid particles in place," Murphy told InformationWeek. The 3D medical printer puts down objects on 2D layers, one on top of the other. The particles used in the construction are made up of stem cells, formed into tiny spheres and cylinders.

The stem cells are available for research purposes from companies including Life Technologies and Invitrogen. When the device is used for treatment, cells will come from the patient, such as bone marrow, or fatty adipose tissues, where stem cells can be harvested. "Because they come from the patient, there's no risk of having a rejection," Murphy said. These are adult stem cells, not the fetal stem cells that have been politically controversial.

Researchers take a cross-section picture of the object they want to build, such as an artery. "We use that as a map to paint by numbers," he said.