The SmartBand 2, Sony's latest fitness wearable, offers a heart rate monitor plus other popular features, including a sleep tracker and activity tracker.

The already crowded fitness wearables market just got a little bigger this week with the release of Sony's SmartBand 2, a wristband that monitors pulse, heart rate variability (HRV), movements, and the quality of sleep.

Once paired with a compatible Google Android or Apple iOS device, the SmartBand 2 uses LEDs and vibrations to notify users when an alarm, a message, or a call arrives.

The main features and capabilities of the SmartBand 2 include an activity tracker for steps, walking, and running, a "Do Not Disturb" mode, Google Fit, heart activity monitors, and stamina mode.

Google Fit is a health-tracking platform developed by Google for the Android operating system. It uses sensors in a user's mobile device or activity tracker to record physical fitness activities such as walking or cycling.

The market for wearables and fitness bands is starting to come into its own. In June, IDC reported manufacturers shipped more than 11 million of these devices, with Fitbit taking the top spot. However, these numbers don't reflect Apple Watch shipments and sales, although more information should be coming soon to see where it ranks in this market.

In the case of Sony, the company is trying to carve out a spot by offering something for that works with Android and iOS, but also a band that is not totally tethered to a smartphone.

When SmartBand 2 is in independent mode, users can track their activities even if they don't have their phone with them.

For Android users, there's a dedicated host app to view recent data, or the Sony Lifelog app for a full timeline of heart rate data and statistics straight from your activity tracker. 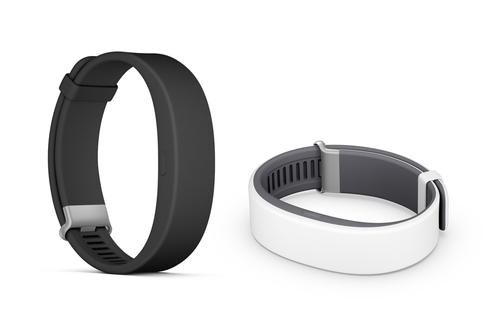 iOS users can download a host app that logs, analyzes, and stores all activity and heart data.

In addition, the SmartBand 2 can be used to control media playback or the camera on a mobile device. It also has a smart wakeup feature that wakes the user at the best time based on the user's sleep cycle.

Available in white and black, the company said additional colors would be made available for the SmartBand 2 after the product's launch.

[Read why HTC is delaying its Grip wearable.]

In compliance with IP68 standards, the SmartBand 2 is protected against dust, provided all ports and covers are firmly closed, and it can be safely submerged in nine feet of freshwater for up to 30 minutes.

The company is also careful to note that the SmartBand 2 is not a medical device, and its data should never be used to make medical decisions, like preventing, diagnosing, monitoring, or treating a disease or injury.

This is an important distinction for users. Despite the general popularity of fitness devices and their corresponding apps, a recent survey indicated consumers are less than confident that their data is secure.

Nathan Eddy is a freelance writer for InformationWeek. He has written for Popular Mechanics, Sales & Marketing Management Magazine, FierceMarkets, and CRN, among others. In 2012 he made his first documentary film, The Absent Column. He currently lives in Berlin. View Full Bio
We welcome your comments on this topic on our social media channels, or [contact us directly] with questions about the site.
Comment  |
Email This  |
Print  |
RSS
More Insights
Webcasts
What We Can Learn from Sports Analytics
Strategies for Success with Digital Transformation
More Webcasts
White Papers
How to Prioritize Risk Across the Cyberattack Surface
Frost Radar: Global Threat Intelligence Platform Market
More White Papers
Reports
2020: Threats in Review
How Data Breaches Affect the Enterprise (2020)
More Reports

I prefer not to have my fitness tracked. I work out as a mere, casual pastime.
Reply  |  Post Message  |  Messages List  |  Start a Board


@Angelfuego I believe that these apps are coming out in bulks but thet are actually not making people approved of these things as all of them, with a little bit of variation, giving same services or functions. I believe if companys can come up with something more closer to customer requirement only then it can work. I also believe that companys need to invest heavily in R&D for more ROI.

For some reason, I am still not enticed to purchase the Sony Smartband 2, nor any other fitness tracker.
Reply  |  Post Message  |  Messages List  |  Start a Board

As much as heart rate trackers and similar are useful, the big one I think will be glucose monitoring. If someone can manage to get that into a wrist band without breaking the skin, it would have a huge audience with many applications felt in medicine and fitness.
Reply  |  Post Message  |  Messages List  |  Start a Board
Editors' Choice
Hot Topics

10 IT Trends to Watch for in 2021 Cynthia Harvey, Freelance Journalist, InformationWeek,  12/22/2020
White Papers
How to Prioritize Risk Across the Cyberattack Surface
The 2020 Duo Security Trusted Access Report
The Insider's Guide to IP Geolocation Data During COVID-19
All In, Online Gaming & Gambling
Managing OTT Content Distribution in the Connected World