A new survey of large enterprises finds a good deal of interest in wearables, especially smartwatches, that is driving the market to look beyond novel healthcare and fitness uses.

Nearly every industry in the US, from manufacturing, to energy, to telecoms, is looking to invest more and more in wearable technologies, such as smartwatches and other sensor-based devices. This in turn is creating a larger market for wearable devices beyond novel uses in healthcare, such as personal fitness.

Those are some of the finding in a new study by APX Labs, which has been making software for wearable devices for the last five years, and Zogby Analytics. The study, "The State of Enterprise Wearables," focused on large industrial companies in the US, in such sectors as manufacturing, telecom, utilities, energy, and the like, to understand their wearable device intentions.

The study, released Sept. 17, found that nearly every industry that they surveyed has already started down a wearable-device pathway. For instance, 93% of the respondents either used or were evaluating wearables for their business, while 87% thought wearables would have a significant impact on their business.

The study focused on specific industries with 500 to more than 5,000 employees, and interviewed 201 different enterprise users, according to Zogby. 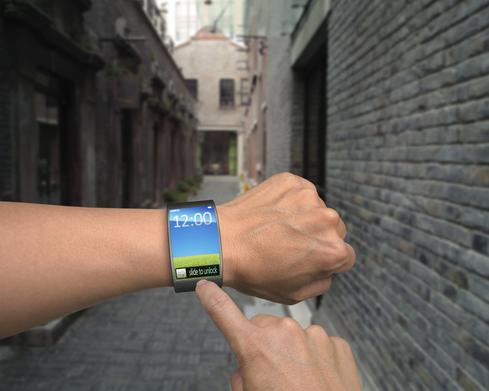 There was openness to how the companies were treating wearable development, since 86% had more than one current scenario pathway active. No companies are truly sure which will be the most productive path for them, so they evaluate many.

The high interest in smartwatches is a bit of a surprise since smartglasses, such as Google Glass, have taken up a lot of the recent conversation about wearables.

Survey respondents think wearables can benefit a large number of employees -- about 45% of an enterprise's employee base on average.

This gives credence to what other analysts have been saying about wearables. Gartner expects smart glasses to realize $1 billion in annual cost savings in the field services industry alone. IHS Research estimates the wearable technology market to grow to $6 billion by 2016.

Brian Ballard, CEO and cofounder of APX Labs, spoke with InformationWeek about the study.

Discussing what significant impact wearables could have on businesses, Ballard noted, "Depending on the company, it could be increases in efficiency, improved safety, or reducing errors. Business is looking for wearables to equip an underserved part of their workforce in order to gain access to real-time information."

Ballard sees this spread of real-time information using wearable devices having its maximum impact on the factory floor.

[Read about IDC's predictions for the wearables market.]

Now is the right time is right for businesses to move into this area because "the ROI is tangible now," Ballard said.

Smartglasses and smartwatches are the devices that currently capture Ballard's attention. "Apple Watches and Samsung's Gear watches are neck-and-neck on the watch side."

"Google Glass is the highest selling smart glass we have come across," Ballard added. "The rest of them like Recon and Epson are tied for second place."

Looking to an augmented reality (AR) device, such as Microsoft's still-in-development HoloLens, Ballard thinks, "It addresses a technology gap that will allow customers to go after some rather specific use cases where AR has advantages over heads-up display."

Ballard also wonders about the legacy back ends in front of the data that wearables need. "Your backend systems need to have the APIs that enable these devices. There also has to be temporal compatibility."

Is that some sort of Doctor Who joke?

Ballard actually has a point. "Wearables can’t query a backend and wait 15 minutes for the output. They need it right then."

Larry Loeb has written for many of the last century's major "dead tree" computer magazines, having been, among other things, a consulting editor for BYTE magazine and senior editor for the launch of WebWeek. He has written a book on the Secure Electronic Transaction Internet ... View Full Bio
We welcome your comments on this topic on our social media channels, or [contact us directly] with questions about the site.
Comment  |
Email This  |
Print  |
RSS
More Insights
Webcasts
Building the SOC of the Future: Next-Generation Security Operations
ROI and Beyond for the Cloud
More Webcasts
White Papers
SANS 2021 Cyber Threat Intelligence Survey
SANS Report: Measuring and Improving Cyber Defense Using the MITRE ATT&CK Framework
More White Papers
Reports
2020: Threats in Review
Email Security Threat Report 2020
More Reports

What sort of heads-up display do you see coming?

I see smartwatches as the evolution of the smartphone. Eventually I think watches are going to be a lot better for all of us. Over time, I would expect these devices to pair nicely with heads-up displays to provide a total system that can be a lot safer than constantly looking down at a phone.
Reply  |  Post Message  |  Messages List  |  Start a Board

Yes, this is really going to impact the factory floor.

Do you think the  white collar worker will be as impacted?
Reply  |  Post Message  |  Messages List  |  Start a Board

I wrote a post about this topics awhile ago, and one of the really cool things that I came across was how wearables are helping in industries where there is more "dangerous work" being done.  Not just first responders, but in construction where hands-free makes it safer for them when working in more dangerous locations where they need to access information, but might not be able to use a traditional device.  I expect Google's project Aura is going to expand to see how they can better cater to these industries and provide new tools to make them more safer, while giving them more access to technology to make their jobs easier.  Imagine being able to see exactly where a faulty piece of equipment is through Google Glass instead of handling a device.  This could be a great benefit for many industries.
Reply  |  Post Message  |  Messages List  |  Start a Board

The BraveNewWorld of sensors, huh?

The less power they suck up; the better they are.
Reply  |  Post Message  |  Messages List  |  Start a Board

Where this new industry is going to go is anyone's guess, but one thing is for sure - whatever develops is going to have to run on tiny bites of electrical power. This is creating whole new avenues in hardware engineering, as engineers scramble to reinvent standard devices that can function with hundreds of picoamps of input power instead of power in the milliamp range as formerly required. Whole new emphasis is being placed on wireless charging, because many of these devices communicate via bluetooth, and are too small for even micro USB ports. Of course, all of this marches hand in hand with what's needed for the IOT.
Reply  |  Post Message  |  Messages List  |  Start a Board
Editors' Choice
Hot Topics