With a Greenway app for the Windows 8 tablet, Pediatric Associates of Bellevue, Wash., has the opportunity to sign up patients as soon as they come into the world.

"The biggest benefit has been when the doctors go out to see patients in hospitals, particularly new babies," Brock Morris, CIO for the 85-doctor practice, told us. "They can create the account, so to speak, and begin to document the patient the very first time on newborn babies."

That was one of the benefits that emerged from an initial test in February. Six doctors were asked to try the PrimeMobile app, developed for Windows 8 by Greenway Medical Technologies with help from the practice and Microsoft. Greenway recently received a 2013 Intel Innovation Award for the care delivery app.

Since Pediatric Associates went live with Greenway's web-based EHRs in 2010, it has had its staff accessing the application on Windows tablets (originally Toshiba devices that were convertible between laptop and tablet modes). However, it is finding that doctors and physician's assistants can be more productive with apps specifically designed for mobile users.

In the last few months, Pediatric Associates has been moving toward routine use of the app on Microsoft Surface 2 tablets.

Based on "extensive time-and-motion studies," physician's assistants logging the data were saving about a minute per visit, Brock said. "We typically run 10-minute sick appointments, so if you figure you're saving a minute of time over a 30-patient day, that means you could gain at least one appointment -- or potentially three." Whether the practice would use whatever time savings materialize that way remains to be seen -- less time spent entering data could also translate into more time for interaction with each patient -- but either way, there's the potential for a real gain.

As Pediatric Associates begins to use the mobile app more routinely, it is targeting the ability for doctors to add vital signs, medical history, and allergy information "right at the point where they are being collected." Otherwise, the doctor is often in the position of writing the information down with the intent of logging it into the system later -- which might not always happen. 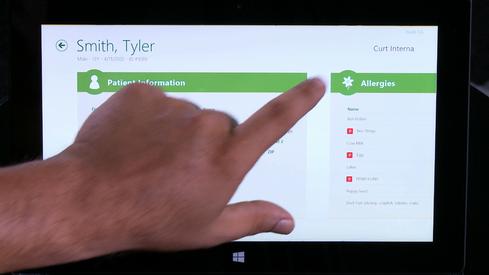 Pediatric Associates does have an ulterior motive for focusing on Windows, based on its proximity to Redmond. "Our location makes that an attractive device. A lot of parents of our patients are Microsoft employees." It's not uncommon for the parents to volunteer that they worked on some of the base technology the doctors are holding in their hands. "But the device form factor and performance was also very attractive to us, particularly the new form factor with the snap-on keyboard."

The practice is also working with Greenway to improve the application modules for templated medical note taking and recording immunizations.

"We believe the only way to build a successful EHR is to partner with our customers," said Johnathan Samples, executive vice president of innovation at Greenway. By working with Pediatric Associates, Greenway can better tailor the app to the practical needs of physicians and practice staff.

Greenway also offers versions of PrimeMobile for iOS and Android, aiming to deliver the same basic set of functions on each mobile client. The Windows 8 version represents a return to that platform. Previously, Greenway had done some work with Windows tablets in the era of Windows CE, the slimmed-down variant introduced in the 1990s for use on non-PC devices. However, it didn't invest there in recent years, Samples said. Greenway did create a Windows 7 Phone app, but nothing for tablets.

With Windows 8, Microsoft put enough emphasis on enabling mobile apps to rekindle Greenway's interest. A lot of its largest enterprise customers also like the idea of Windows 8 as a mobile solution because they have experience managing Windows clients, and they find iOS and Android much more challenging, Samples said.

The mobile client "has probably about 75% of the functionality" found in the web app targeted at desktop users, but that percentage is steadily growing. "Two or three years down the road, we think most physicians are going to be using a tablet at the point of care, not a desktop machine."

Brock described physician response to the app. "The doctors say things like that it improves their cool factor," he said. "There's a change in the interaction when doctors are using mobile devices and new apps. In the demographic we're working with, it's what parents expect."

David F. Carr is the editor of Information Healthcare and a contributor on social business, as well as the author of Social Collaboration For Dummies. Follow him on Twitter @davidfcarr or Google+.

Though the online exchange of medical records is central to the government's Meaningful Use program, the effort to make such transactions routine has just begun. Also in the Barriers to Health Information Exchange issue of InformationWeek Healthcare: why cloud startups favor Direct Protocol as a simpler alternative to centralized HIEs (free registration required).

We welcome your comments on this topic on our social media channels, or [contact us directly] with questions about the site.
Comment  |
Email This  |
Print  |
RSS
More Insights
Webcasts
Building the SOC of the Future: Next-Generation Security Operations
ROI and Beyond for the Cloud
More Webcasts
White Papers
IDC Workbook: Best Practices for Cloud Security
Full Body Exposure: CybelAngel Analysis of Medical Data Leaks
More White Papers
Reports
Building an Effective Cybersecurity Incident Response Team
How IT Security Organizations are Attacking the Cybersecurity Problem
More Reports

As a Greenway user for several years, I've seen gradual improvements in their mobile applications.

I do have a couple of comments:

1. Greenway 'PrimeMobile' is essentially the same application on iOS, Android and Windows (metro?).

2. Having tried all 3 versions, I feel that touch control, speed and fluidity of the App is much better on the iPhone and Android. The Windows version has a rachety, sticky feel that is annoying to me.

4. I have some user interface issues. For example, why must one confirm everything. If I click 'edit' and don't change anything or hit 'cancel' why does the App ask me to confirm the 'cancel' (with a cryptic 'OK' or 'Undo' no less)?

5. More stuff needs to be added, like e-prescribe and order entry, scheduling, and ability to create an H&P and progress note.

Not nearly as much as they should...

Reminds me of the study a few years ago where they found that 95% of smartphones in a hospital contained deadly bacteria:

Good to know, thanks. Do you think physicians and nurses are doing this regularly?
Reply  |  Post Message  |  Messages List  |  Start a Board

Somebody who's on his or her feet all day, move, move moving fast. If data entry's a big part of that job, imagine what a boon a tablet is as opposed to walking across the length of a room to a static system, and entering what you think was said 15 seconds later rather than entering it as it's said right now. But I have to chuckle at the thought of someone using an Android publicly in a doctor's office in Bellevue, Washington - kinda like driving to work at a GM plant in a Toyota :-)
Reply  |  Post Message  |  Messages List  |  Start a Board

Well, I guess it helps if you're using Surface tablets to be somewhere where lots of Microsoft employees live. Doctors are notoriously balky at learning a new user interface. But here's a place where Windows 8 actually works-- doctors and patients can use the same devices. But we can't all live and work in Bellevue, Wash. , can we?

Interesting point. In hospitals, I know they have a big emphasis on being able to sterilize any piece of equipment -- I remember someone telling me they'd found iPads could be wiped with disinfectant and survived just fine, even though Apple didn't sanction the parctice. I would hope medical practices also give cleaning their gadgets some attention.
Reply  |  Post Message  |  Messages List  |  Start a Board

I wonder how many illnesses have been acquired through touch-based devices? They can get pretty grimy.
Reply  |  Post Message  |  Messages List  |  Start a Board
Editors' Choice
Hot Topics