The upcoming version of Microsoft's wearable device, the Band 2, will feature a more graceful curved display, according to images that leaked online.

Photos revealing Microsoft's upcoming wearable device, called the Band 2, have leaked onto the Web. They show a gadget with a black body and curved screen.

The images come courtesy of the Spanish blog MicrosoftInsider. On Sept. 20, the site posted four photos of the device and indicated the Band 2 would be more widely available in Europe than the previous model.

The major difference between the old Band and the new one is the presence of a curved display. Microsoft's first model had an awkward design with a flat 1.4-inch TFT full-color screen.

Microsoft has an event scheduled on Oct. 6 that will likely reveal more details about the device, including pricing, feature sets, and availability, the blog post, which is written in Spanish, said. In addition to the Band, Redmond is also expected to unveil the Surface Pro 4, as well as several new Lumia handsets.

The first Band is powered by Microsoft Health, which helps users achieve wellness goals by tracking heart rate, steps, calorie burn, and sleep quality. It can also display email previews and calendar alerts on the screen. 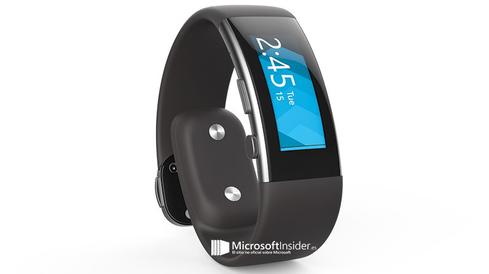 Golfers can also get automatic shot-tracking from an application from TaylorMade, which uses the built-in GPS to detect which hole is being played. It provides distance to the front, center, and back of the green, while sensors track strokes, steps, heart rate, and calorie burn.

The Band works with the iPhone, Google Android devices, and Windows Phone. It also comes with Cortana, Microsoft's digital concierge.

Users can choose between multiple background designs and colors for the display. The Band comes with a UV monitor, time and stopwatch, Bluetooth 4.0 connectivity, and the ability to check updates on Twitter and Facebook.

Aside from partnership with various fitness specialists, including Gold's Gym, Strava, and RunKeeper, Microsoft has also partnered with Starbucks to offer a built-in payment option.

The battery charges in 1.5 hours and will stay charged for two days, the company claims, although advanced functionality like GPS use will impact battery performance.

It also sports a magnetically coupled USB charging connector. It's splash- and dust-resistant, and it retails for $199.99.

The company faces an uphill battle for marketshare in an increasingly crowded wearables market, with Android devices and Apple's juggernaut Watch dominating the field.

However, worldwide shipments of wearables are projected to hit nearly 175 million units by 2019, according to IT research firm IDC's quarterly Wearable Device Tracker. That projection indicates there may be plenty of room for more competition.

[Read more about wearable adoption in the enterprise.]

The IDC report also predicted that wearable devices that give consumers the ability to download and use third party apps -- such as the Apple Watch, Motorola Moto 360, Samsung Gear S-series, and Pebble Time smart watches -- would come to dominate the market.

In addition, Goode Intelligence's latest research, which examines how biometrics will change the banking industry, indicated that the rapid adoption of biometrics on mobile and wearable devices would deliver frictionless authentication and identity verification services across the industry.

"The beauty of the mobile and wearable biometrics is that they can connect with a wide variety of connected devices using either short-range radio (NFC or Bluetooth) or WiFi/Internet networks," Alan Goode, author of the report and founder of Goode Intelligence, wrote in a statement.

Nathan Eddy is a freelance writer for InformationWeek. He has written for Popular Mechanics, Sales & Marketing Management Magazine, FierceMarkets, and CRN, among others. In 2012 he made his first documentary film, The Absent Column. He currently lives in Berlin. View Full Bio
We welcome your comments on this topic on our social media channels, or [contact us directly] with questions about the site.
Comment  |
Email This  |
Print  |
RSS
More Insights
Webcasts
Data Protection Strategies and Secrets - 12/10 @ 11am EST
Succeeding With Secure Access Service Edge (SASE)
More Webcasts
White Papers
Why Chatbots Are So Popular Right Now
5 Key Steps for Assessing Your Security Effectiveness
More White Papers
Reports
SANS Report: Measuring and Improving Cyber Defense Using the MITRE ATT&CK Framework
Special Report: Understanding Your Cyber Attackers
More Reports

@Glenbren: I never played golf but I just might buy this and end up buying a golf set as well. Digital natives, aren't we?
Reply  |  Post Message  |  Messages List  |  Start a Board

Why didn't anybody at microsoft think about this four years ago? Where was the brainstorming then? Come on it is such a basic requirement to have curved screens for something you wear in a circle.
Reply  |  Post Message  |  Messages List  |  Start a Board

I'm sure my husband would get it just for the golf application. The curved screen and other features would just be a bonus.
Reply  |  Post Message  |  Messages List  |  Start a Board

A curved screen on the band would be amazing and more ergonomical. I hope they are able to pull it off because it will allow them to trim down the size and bulk.
Reply  |  Post Message  |  Messages List  |  Start a Board
Editors' Choice
Hot Topics