When Google inadvertently allowed its Street View cars to gather the data exhaust emanating from WiFi networks in 2006, the company's use of sensors represented a privacy violation. Lawsuits, fines, and apologies followed.

In a statement, Karin Tuxen-Bettman, program manager for Google Earth Outreach, described the partnership between Google and Aclima as a way to build upon Street View's infrastructure and to test Google Maps as a platform for environmental sensing.

This fall, Google and Aclima will conduct a similar test in the San Francisco Bay Area. 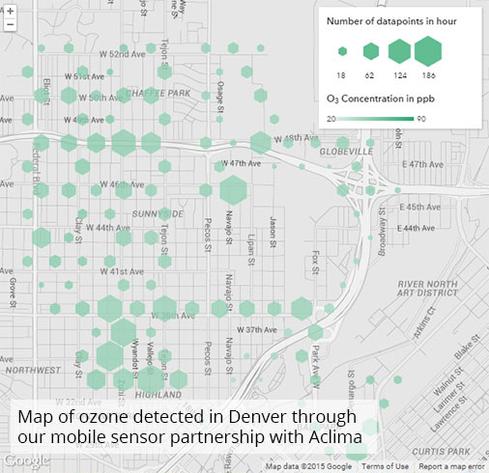 "We can start to see things like the effectiveness of the timing of stoplights," said Aclima CEO Davida Herzl in a phone interview. "Idling at stoplights is actually a huge source of pollution." She suggested that data gathered in the Bay Area might suggest locations to place trees along roads, given that trees can absorb some of the nitrogen dioxide emitted by cars.

For the past few years, Aclima has been working with Google to deploy a network of environmental sensors across 21 Google offices in four different countries. The network consists of 500 Aclima sensors that evaluate 500 million data points daily, including measurements of temperature, humidity, vibration, noise, light, and particulate matter in the air.

Herzl described the sensor network as a way to take the environmental pulse of a workplace. "The information the system is generating is really a new body of knowledge about what's happening inside our buildings," she said.

Herzl said that while we spend 90% of our time indoors, what happens in the surrounding area has an effect. "When there are high traffic days, we see the influence inside," she said.

Environmental data of this sort can help a company determine when and where buildings should be ventilated, Herzl said, and can inform office design. For Google, the data provides insight into the health and productivity of its employees.

Herzl doesn't see privacy implications for this sort of data. "Air and water are shared resources," she said. "They belong to all of us. ... All of our data is in the commons."

In 2013, Aclima entered a research agreement with the US Environmental Protection Agency (EPA) to improve the quality of data derived from small sensors. The firm has also been working with the EPA, Lawrence Berkeley National Laboratory, University of California Berkeley, and the University of Illinois at Chicago to create an even smaller particulate matter sensor.

Aclima offers not only environmental sensors tuned to the specific needs of public and private sector clients, but the managed IT infrastructure to process, analyze, and visualize gathered data.

Pointing to a recent McKinsey & Company report that projects the Internet of Things will be worth $11 trillion by 2025, Herzl anticipates that enterprises will find a variety of uses for sensor networks.

Thomas Claburn has been writing about business and technology since 1996, for publications such as New Architect, PC Computing, InformationWeek, Salon, Wired, and Ziff Davis Smart Business. Before that, he worked in film and television, having earned a not particularly useful ... View Full Bio
We welcome your comments on this topic on our social media channels, or [contact us directly] with questions about the site.
Comment  |
Email This  |
Print  |
RSS
More Insights
Webcasts
People Are The Most Important Part of Autonomous SOC
Don't Miss This Cybersecurity Virtual Event
More Webcasts
White Papers
Trustwave Global Security Report
iPaaS Intrigue: A Faster Path to Digital Transformation
More White Papers
Reports
Gartner Market Guide for Insider Risk Management Solutions
The Infoblox Q4 2020 Cyberthreat Intelligence Report
More Reports

asksqn, if the feds won't allow the publishing of Fukishima radiation levels on the West Coast, where are you finding them and following them? And why would the feds not allow the radiation levels to get out? I can understand why the Japanese government would try to obscure the trust, but what benefit does the US gov have?
Reply  |  Post Message  |  Messages List  |  Start a Board

Great idea.  The only problem is that government most likely will not allow the results of the emissions testing conducted by Google to see the light of day in the same way the federal government will not permit the actual radiation levels/effects emanating from the Fukushima disaster to the west coast of the US to be published.   I can visualize the red tape Google will run into since it is not specifically blessed by the EPA to supply the data.

"Herzl said that while we spend 90% of our time indoors, what happens in the surrounding area has an effect."

I agree with Herzl. That is indeed quite an intelligent remark. We may think that the internal environment that we spend time in is under our control, but that itself cannot exist in isolation and does get influenced a lot by the external factors. There's no way you can completely control the internal environment while disregarding the external one completely.
Reply  |  Post Message  |  Messages List  |  Start a Board

"Aclima offers not only environmental sensors tuned to the specific needs of public and private sector clients, but the managed IT infrastructure to process, analyze, and visualize gathered data."

I think this should lead to more intelligent monitoring of data and most importantly the integration of data with auotmated decision-making. Overall, this would be smarter control of the internal environment based on the external factors. Ultimately, we should see more efficient use of resources through this.
Reply  |  Post Message  |  Messages List  |  Start a Board
Editors' Choice
Hot Topics