"Nanoparticles are the nexus between biology and engineering, so we can make these nanoparticles behave in ways that we want them to," Conrad explained. "Essentially, the idea is simple: You swallow a pill with these nanoparticles, and they're decorated with antibodies or molecules that detect other molecules. They course through your body, and, because the core of these particles are magnetic, you can call them somewhere... And you can ask them what they saw." 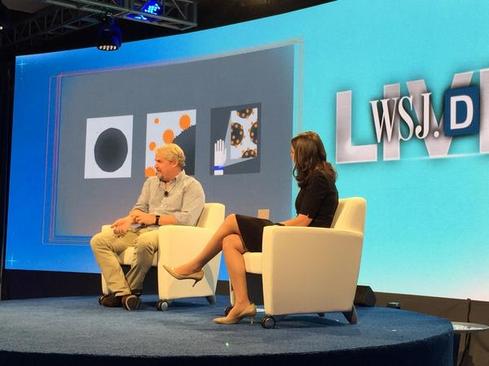 To interrogate these particles, Google is contemplating a wearable device. It will gather the particles using a magnet and read their characteristics to see if they detected cancer or other identifiable conditions during their travels through the bloodstream.

Google didn't immediately respond to a request for comment.

According to The Wall Street Journal, the project is at least five years from completion and faces numerous obstacles, both scientific and regulatory, on its way to market.

The potential health risks of nanoparticle manufacturing and of nanoparticles in the human body are not well understood, the National Institute for Occupational Safety and Health (NIOSH) says. Research into these areas is ongoing.

Conrad said that Google isn't planning to use the technology itself. Rather, Google aims to license the system to other companies, which would handle the data and security. In so doing, Google would presumably avoid amplifying concerns that it controls too much data.

Nonetheless, Google remains interested in health data. In February, it joined the Global Alliance for Genomics and Health to help develop standards for storing and securing genomic and clinical data in the cloud. As a seller of cloud services, Google has an incentive to make the cloud-based storage more suitable for health data.

Google X has another health-oriented project, announced in January, that's further along. The research group has developed a prototype smart contact lens that measures glucose levels in tears using a tiny chip. Google researchers have begun discussions with the Food and Drug Administration in the hope of eventually getting the device approved for diabetics, who need to regularly monitor their glucose levels. As with its nanoparticle project, Google plans to work with health industry partners rather than trying to market the contact lens on its own.

Considering how prevalent third-party attacks are, we need to ask hard questions about how partners and suppliers are safeguarding systems and data. In the Partners' Role In Perimeter Security report, we'll discuss concrete strategies such as setting standards that third-party providers must meet to keep your business, conducting in-depth risk assessments -- and ensuring that your network has controls in place to protect data in case these defenses fail. (Free registration required.)

Thomas Claburn has been writing about business and technology since 1996, for publications such as New Architect, PC Computing, InformationWeek, Salon, Wired, and Ziff Davis Smart Business. Before that, he worked in film and television, having earned a not particularly useful ... View Full Bio
We welcome your comments on this topic on our social media channels, or [contact us directly] with questions about the site.
Comment  |
Email This  |
Print  |
RSS
More Insights
Webcasts
Nip Ransomware in the FUD: Detecting Attacks Pre-Encryption
Don't Miss This Cybersecurity Virtual Event
More Webcasts
White Papers
A Business Case for Vulnerability Remediation Orchestration
MontanaPBS Shifts to Agile Broadcasting with Help from Raritan KVM Solutions
More White Papers
Reports
Key Strategies for Managing New Risks in Cybersecurity
The State of Cloud Computing - Fall 2020
More Reports

I agree: Everyone's comments here showed me all the benefits Google gets, even if its stated goal fails. I think it's terrific that a public company uses this target, no matter the spinoff benefits. Nice to see and let's hope the company succeeds at this goal. Google Maps are great and all that, but a pill that maps bodies for sickness or health would be priceless.
Reply  |  Post Message  |  Messages List  |  Start a Board

When you think about it, that would be one of the ultimate health-improving inventions. I have to get blood tests every six months and would love to swallow a pill that told me, "Your B12 is low" or "Your kidneys are operating at 100%." Think of the savings -- in pain, lost wages/time, and money for employees/payers/taxpayers, etc. Of course, if the pill said, "Your vitamin D level is too low," I'd think doctors would follow up with a traditional blood test, but something like this would improve the quality of life for many, many people and cut costs immensely.
Reply  |  Post Message  |  Messages List  |  Start a Board

This is true - Google is seeking for the battlefield in which their new technology can play an important role. So that's why we see so many diverse but fancy products from Google X labs. It's hard tosay if all of them will gain popularity in the near future but anyway they are good explorations and the goal is bringing more convenience to our daily life.
Reply  |  Post Message  |  Messages List  |  Start a Board


Alison I think it can be viewed as a growth strategy for expanding their market and of course the usage of their technology tools, it's not really that out of the realm when you consider they are looking for other technology options that will leverage the infrastructure they have built.

I wonder if in the near future this kind of detection pills can stay in our body indefinitely, and warn us when we're getting sick; so we can do a doctor visit right then.
Reply  |  Post Message  |  Messages List  |  Start a Board

"Even if it fails, the R&D will likely yield some usable insights. Google's not known for hiring stupid people. And if they succeed, it's a game-changer. Meanwhile, they bask in the press coverage."

Exactly. There's a pervasive sense among many people I know at Silicon Valley companies that the tech industry will solve virtually all problems in the world, including ones that have stumped the conventional medical industry for decades. Is some of this confidence misplaced? Probably. But even if this idea in particular doesn't pan out, we'll learn some valuable things in the aggregate. I see it as a positive that this generation's smartest minds are contributing to projects like this.

For a company like Google, the benefits outweigh the financial risks, whatever they happen to be. This is one of many such projects at the company, and if any one of them strikes gold, it will more than pay for failed efforts. Moreover, as Lorna points out, there are a lot of PR and recruiting benefits. Steve Jobs convinced people to work at Apple by telling them that they'd be working at a company that would change the world (or so goes an anecdote I've heard). Why shouldn't Google use a similar pitch? If you're a talented engineer choosing among companies that all offer elite packages, would you rather work for the one that's known only for selling ads, or the one that makes a lot of money selling ads but nonetheless spends a ton of resources developing free products and potentially disruptive concepts across all disciplines?
Reply  |  Post Message  |  Messages List  |  Start a Board

> I don't think anybody thought Google would ever touch the healthcare sector.

@vnewman2-- Yeah i will have to agree it is a long road to actual avalability. but it is surprising to see google emabarking on the healthcare sector.
Reply  |  Post Message  |  Messages List  |  Start a Board

@saliknaqi - From what I read, there's some similar technology out there and Google's claims outlined in the patent app are an attempt to detail how their technology is different enough to give them the rights to it.  It's a long road going from patent to production however...
Reply  |  Post Message  |  Messages List  |  Start a Board

@dstock – I have to agree with you on this. Google is a company which always has an angle on the projects they start. They have proven success records.
Reply  |  Post Message  |  Messages List  |  Start a Board
Page 1 / 4   >   >>
Editors' Choice
Hot Topics