Expanding beyond telemedicine links between healthcare facilities, Cisco is introducing a Web and video portal for hospitals that want to connect to patients at home.

Cisco Extended Care can be used to host video consultations between a patient and a healthcare provider, which can be either ad hoc or scheduled. For scheduled video calls, the Extended Care web portal can also book appointments and prompt users to fill out pre-call questionnaires. At the appointed time for a call, a doctor can also use a chat function to let a patient in the virtual waiting room know if he or she is going to be delayed.

Although Cisco has provided videoconferencing equipment and telemedicine applications to hospitals for years, "one of the questions that always comes up is how reach to out and impact patients who may be at their home," said David Plummer, general manager of Cisco’s Care-at-a-Distance solutions group. Extended Care works with either hardware-based video endpoints or software-based ones, like Jabber, for use from a computer in the home or office. Other Cisco products such as WebEx might also be incorporated in the future, Plummer told us.

[ When will the law catch up with advances in telemedicine? Read Online Healthcare: States Must Be More Open-Minded.]

Extended Care provides some patient-portal functionality, such as secure messaging between providers and patients, and the ability to record readings from health monitoring devices. The latter would have to be done manually for now, although Cisco also plans to pursue API-level integrations with popular devices like the Fitbit, Plummer said.

Extended Care has been designed so components of the system can also be embedded in an existing patient portal, he said. The software supports both the HL7 healthcare industry data interchange standard and the Web services style of integration favored by consumer Web applications.

Hospitals haven't been twiddling their thumbs waiting for Cisco to take an interest in home video consultations. Stanford Hospital & Clinics introduced video consultations in September, based on a capability provided by Epic, the electronic health records software maker. Plummer said Cisco and Epic share many customers, particularly in the ranks of university hospitals, "who are driving Epic to work with us," and Epic has been receptive to allowing Cisco to show how it can improve on the solution Epic produced on its own. 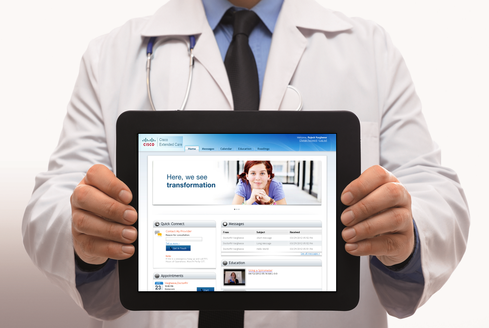 For example, the Cisco solution will be better able to handle multi-party video calls, Plummer said. Meanwhile, integration with Epic would make it easier for doctors logged into Extended Health to retrieve and record medical notes in the course of a video consultation.

Cerner customers have also expressed an interest in integration with Extended Health, but so far Cisco's only active partnership is with Epic.

David F. Carr is the Editor of Information Healthcare and a contributor on social business, as well as the author of Social Collaboration For Dummies. Follow him on Twitter @davidfcarr or Google+.

We welcome your comments on this topic on our social media channels, or [contact us directly] with questions about the site.
Comment  |
Email This  |
Print  |
RSS
More Insights
Webcasts
Unlocking the Ultimate Source of Truth in Cloud Security--Network Data
SecDevOps: Tying Security to Your Application Development Processes
More Webcasts
White Papers
DevOps for the Database
How San Francisco Secured Its Cloud
More White Papers
Reports
2020 State of Cybersecurity Operations and Incident Response
The Drive for Shift-Left Performance Testing
More Reports