Fitness club members will be able to use a touch screen console to record activity, then pipe it to a personal health record.

Precor, an exercise machine maker that popularized the elliptical fitness crosstrainer, is at CES this year showing off the integration between the networked, touch screen consoles on its Preva trainers and the Microsoft HealthVault personal health record system.

The Microsoft partnership that Precor announced at CES is a spinoff of its work with Arizona State University, which has installed the Preva machines at multiple campuses as part of a program to encourage student and faculty fitness. Software tracks activity as recorded on any of the exercise machines or on the Preva mobile app. ASU encourages users to also synchronize those records with a HealthVault account that can help them build a broader digital picture of their health. With nearly 300 pieces of networked equipment, ASU's is the largest networked fitness installation in the world, according to Precor.

"ASU is the first and biggest installation for us," said Brent Brooks, VP of networked fitness at Precor. "As society is getting more into the 'quantified self' movement, ASU is thinking well in front of the average [fitness club] operator about how to integrate various elements of the program so people can track and get feedback on diet, stress, and so on." The Mayo Clinic is also studying ASU's experience with the devices to see whether this type of feedback can be effective at controlling obesity and other health problems.

Precor wants to use cloud services connected to the touch pad consoles on its devices as a way of distinguishing them from the competition, Brooks said. "It's getting harder to distinguish treadmill from treadmill or elliptical from elliptical, based on the hardware alone," he said, so maybe software can do more.

Networked equipment also gives health clubs a way to distinguish and brand themselves, Brooks noted. From an administrator's account, it's possible for health clubs to customize the welcome screen on their devices with the club's logo and a message to members. By getting members to set and track goals through the online system, health clubs have a chance of improving engagement -- something that's much needed in an industry where 30% of members drop out within a year after joining a club, according to Brooks. 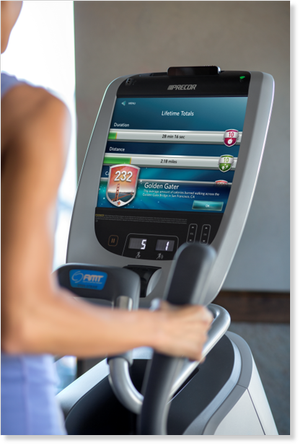 "We realized that once we had this cloud-based infrastructure, we could do a lot of other creative things," he said. Microsoft has been integrating HealthVault with personal health tracking devices such as the Fitbit and wireless scales, but this is its first integration with this sort of exercise machine, he added.

"The goal of HealthVault is to help every individual create a full picture of their overall health and well-being, and then use that information with tools and services that improve their lives," Sean Nolan, distinguished engineer for Microsoft HealthVault, said in a statement. "Preva is a fantastic example of both of these -- they make it super-simple to track workouts in the gym or via their mobile app, and they provide motivation to exercisers through a unique rewards system that reminds them that their hard work is paying off."

CES attendees can take a test drive of Preva during exhibit hours at South Hall 2 Booth #26923.

David F. Carr is the editor of InformationWeek Healthcare and a contributor on social business, as well as the author of Social Collaboration For Dummies. Follow him on Twitter @davidfcarr or Google+.

We welcome your comments on this topic on our social media channels, or [contact us directly] with questions about the site.
Comment  |
Email This  |
Print  |
RSS
More Insights
Webcasts
Building the SOC of the Future: Next-Generation Security Operations
Making Cybersecurity Work in Small and Medium-Sized Businesses
More Webcasts
White Papers
Passwordless: The Future of Authentication
Research Report: Evaluating Your Organization's Cybersecurity Readiness
More White Papers
Reports
How Data Breaches Affect the Enterprise (2020)
The State of Cloud Computing - Fall 2020
More Reports

I'm a bit fan of HealthVault and it has everything you want there and yes I can forgive them for connecting to the data selling Fitbits and the rest of them out there as you have to use a Fitbit to begin with to have them suck your data in.  I have been a pro PHR person and given lectures for years, just did one this week on the Blue Button for senior group.  I showed a little HealthVault information and ran one of their videos.  This is a one step at a time and when I left I am sure I had some seniors that will be able to set up a MyMedicare account, download their Blue Button records and print them...that's better than nothing of course.  I went the next step with PHRs and suggested they get helpt to set one up too.  Yeah I did the thing with my mother in connecting CVS and a few other apps but beleive me, it's over whelming for most.


Once you leave CES, you get back to the real world and let me tell you it's hard to get interest in a PHR as the general public is not there yet.  I had to laugh at the hype on everyone will be wearing sensors...that's a long time down the road and in the wearable business I think you might find insulin pumps and devices that connect to implanted defibrillator devices..in other words the folks that really need them to be at the top of a user's list.


Having it on the exercise machines, sure can't hurt but it's not going to speed up folks using PHRs but the exposure to one at the gym is there so not bad at all. Again just don't get out there too far and think everyone's jumping on this bandwagon and believe the news you read.  The news is actually another issue we have coming up with the journobot where we are getting some and there will be more "news farms" computers writing the news so you will get repitition as the algos can go out and do this now, you see some of it on Forbes already and they are trying to sell it so just be aware..I discuss quantitated justification here...and by the way Professor Siefe when he gets his new book out will have a chapter on the on the journobot.  I still my news done by humans, so why I'm reading here:)

I want to be able to do things like access health and workout information. Problem is, I don't want anyone else to be able to see that stuff. It's a concern.
Reply  |  Post Message  |  Messages List  |  Start a Board

If the MS Healthvault/Precor combo helps gyms create a better experience for members and gives Precor better data to make better machines, that's good progress. Just as long as a treadmill doesn't start asking me for my social security number. Height, weight and age is all I'm giving up!
Reply  |  Post Message  |  Messages List  |  Start a Board

Actually, I think HealthVault is the most successful and widely used personal health record service. It's just that the whole category is still struggling to attract consumer/patient interest.

I'm not citiing any particular marketshare research, but at a minimum HealthVault is the best known of these services.
Reply  |  Post Message  |  Messages List  |  Start a Board