Long a pioneer in adopting electronic medical records, the University of Pittsburgh Medical Center is on the verge of making them work together in new ways.

The University of Pittsburgh Medical Center's commitment to a high-profile, sometimes-for-profit healthcare IT development center came into question last summer when the top two executives involved in the venture left. But UPMC's new technology leaders say the organization's ambitions haven't changed. If anything, they've grown bigger.

After 18 years as CIO of UPMC, and five years of nurturing its incubator-like Technology Development Center, Dan Drawbaugh decided last August to leave the healthcare system to "pursue other professional interests." At about the same time, Rebecca Kaul, who as president of the TDC articulated the organization's innovation strategy, also left UPMC. Their departures were unrelated and voluntary, according to UPMC. Even so, it was hard not to question whether they would mark a shift in strategy and perhaps a retreat from the notion that UPMC would invent healthcare technologies and bring them to market in addition to taking advantage of them in its clinical and operational work.

Based on a recent tour of the TDC and other outposts of innovation within UPMC, all systems indeed seem go. The conglomerate of hospitals, physician practices, and health plans that grew up around the University of Pittsburgh Medical Center still sees an opportunity to move beyond the current fragmented state of healthcare IT to more-coordinated, efficient, and humane systems, according to its leaders.

"It's not about incremental change," says Dr. Rasu Shrestha, the new president of the TDC as well as UPMC's chief innovation officer. "We're saying, let's move things to the next level -- where healthcare really needs to go." The federal Meaningful Use initiatives propelling adoption of health IT have tended to reinforce the digitization of paper processes, rather than force a rethinking and reinvention of them, he says. Digitizing medical records is only a first step.

Holding court in a conference room at the TDC, Shrestha and new CIO Ed McCallister professed to be "joined at the hip" in their pursuit of health IT advances. McCallister previously was CIO of UPMC's health insurance division, while Shrestha was VP of medical information technology, with a specialty in radiology informatics.

UPMC innovations often are developed in response to practical needs within the health system and tested within its clinical and insurance operations. If successful, they might graduate to broader deployment within UPMC and, sometimes, to commercialization. "If there's a challenge out there in healthcare, we've identified it -- for better or worse," McCallister says.

That's partly a factor of scale. UPMC is the largest non-governmental employer in Pennsylvania, with more than 62,000 employees. Although the TDC is a separate operation, its IT staffers have an opportunity to contribute their ideas and participate in new initiatives, the two men said. "One of the things we want to do is make sure innovation is seen as ordinary," not a separate activity, Shrestha says. 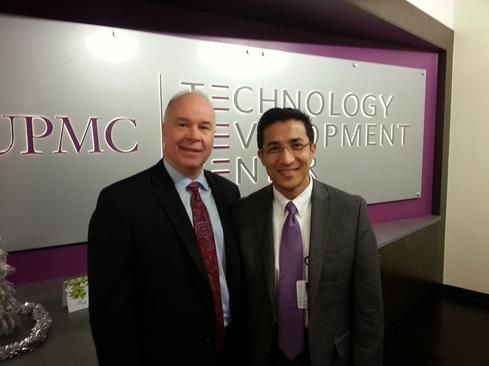 The TDC currently has about 200 employees working on UPMC's own projects as well as joint ventures with GE Healthcare, Microsoft, Nuance, and Optum. The plan is to grow the staff to about 250 people in 2015, "and then we'll take a deep breath" to reevaluate progress, Shrestha says.

UPMC is affiliated with, but not owned by, the University of Pittsburgh. For technology talent, it can also draw on tech powerhouse Carnegie Mellon. Despite its Rust Belt reputation, Pittsburgh is in the midst of a revival, and Shrestha talks about wanting to play a role in its transformation into a hotbed of "eds and meds" technology. The TDC occupies a floor of the Bakery Square complex, a former Nabisco factory building where Google also has an office. Shrestha jokes that Google located nearby "to try to emulate some of our

Good to see UPMC sticking to its guns with new tech leadership. Given the scale of its ambition and commitment, it would've been disappointing if they couldn't make a go of it
Reply  |  Post Message  |  Messages List  |  Start a Board
InformationWeek Is Getting an Upgrade!