Drawbaugh, whose inventive approach to healthcare IT and revenue creation earned UPMC a No. 1 ranking in the 2013 InformationWeek 500, is leaving his role after 18 years.

UPMC's Dan Drawbaugh, one of the most celebrated innovators in healthcare IT, has decided to step down "to pursue other professional interests" after 18 years as CIO of the health system built around the University of Pittsburgh Medical Center. 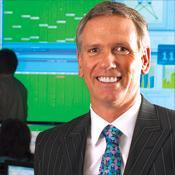 InformationWeek recognized UPMC as the No. 1 IT innovator across all industries in its 2013 InformationWeek 500 ranking. Drawbaugh was also InformationWeek's Chief of the Year in 2006. This was one of many recognitions; UPMC has been named a "Most Wired" hospital for 16 consecutive years by Hospitals & Health Networks, according to the press release.

Beyond being an early adopter of electronic health records, UPMC has taken on the challenge of inventing needed technologies that do not yet exist (or funding companies that will invent them). With a technology development center employing more than 120 people, UPMC is developing products that it can use in-house and also market as profit-making opportunities. In other words, the UPMC IT organization wants to be a revenue generator rather than a cost center for its parent institution.

"Almost everything I'm doing, I'm thinking, 'Can I make it into a commercial product?' " Drawbaugh told InformationWeek's Chris Murphy in an InformationWeek Radio program in December.

At the last InformationWeek Conference, Drawbaugh explained why it's worthwhile to invest in creating technologies rather than relying on the vendor community to do so independently.

His key point is that venture-backed startups will create a better product with the help of a highly engaged alpha site that also happens to be an investor. "They might not have an equity interest, so they're committed to it, but how much are they really committed to it?" Drawbaugh said. "So in terms of alignment, having all that within one ecosystem is a significant differentiator."

Drawbaugh's 30 years of service to UPMC started well before he was named CIO of the health system in 1996. A graduate of Temple University with a Bachelor's degree in biomedical and electrical engineering, Mr. Drawbaugh was recruited as director of biomedical engineering for Shadyside Hospital (now UPMC Shadyside) in 1983, according to his official biography. He was named the hospital's chief information officer in 1990 and joined UPMC when it acquired Shadyside six years later. He holds a Master's degree in business administration from Duquesne University in Pittsburgh.

David F. Carr oversees InformationWeek's coverage of government and healthcare IT. He previously led coverage of social business and education technologies and continues to contribute in those areas. He is the editor of Social Collaboration for Dummies (Wiley, Oct. 2013) and ... View Full Bio
We welcome your comments on this topic on our social media channels, or [contact us directly] with questions about the site.
Comment  |
Email This  |
Print  |
RSS
More Insights
Webcasts
Detecting and Preventing Insider Data Leaks
People Are The Most Important Part of Autonomous SOC
More Webcasts
White Papers
Sunburst: Impact and Timeline
Data Orchestration: Critical Elements for Data Strategy and Infrastructure
More White Papers
Reports
The State of Threat Detection and Response
How IT Security Organizations are Attacking the Cybersecurity Problem
More Reports

I think there are a few things necessary for longevity in the role. First, define and then deliver against a revenue generating value proposition.  Second, build a vision of market leadership and find the right resources to make the vision a reality.  And third, be very in tune with the political and cultural environment of the organization i which you work.
Reply  |  Post Message  |  Messages List  |  Start a Board

Susan - I agree that Dan's tenure is impressive.  And especially considering he was able to innovate in a complex and highly regulated environment.  If you ask me he could get a nice gig just consulting other healthcare CIO's about how to get the job done.  One of the biggest challenges that I have experienced in finishing jobs related to healthcare is the protective posture that the CIO and their direct reports take.  They also seem to be short handed so many tasks started and few finished.  Almost seems impossible for the to take a task from start to finish.  They seem to just do the bare minimum and then move on to the next task and repeat.  And there is no innovation in that behavior, that is just hanging on by a thread
Reply  |  Post Message  |  Messages List  |  Start a Board

@David: Dan's considerable tenure at UPMC flies in the face of the conventional wisdom about the typical CIO tenure. What would you say are the key attributes a CIO needs to be able to remain in that role with one company for more than the 3-5 year average we often hear cited?
Reply  |  Post Message  |  Messages List  |  Start a Board
Editors' Choice
Hot Topics