Practice Fusion CEO Ryan Howard wants doctors to know they don't have to pay for the privilege of adopting electronic health records.

One of his saviors was an investment club called Band of Angels, which appointed retired cardiologist Wally Buch to take the lead on deciding whether Practice Fusion was worth helping. Buch liked the product -- and Howard's scrappy attitude. "I was taken by his tenacious nature first," Buch said in an interview. "I'm a people person, in terms of investing, and I was very impressed by him." After also meeting with the software engineering team, he said, "I had a sense that these people were going to be successful, no matter what happened."

Buch sensed a market opening, since no EHR product seemed to be "particularly well loved," he said. The browser-based software model was the right choice for doctors, particularly in small practices, who had no interest in paying for the servers, software, consultants, maintenance, and backups required for an on-premises deployment, he said.

A key opportunity came from President Obama crafting a stimulus plan that led to the HITECH Act, setting up incentive payments to doctors and hospitals who achieved "meaningful use" of EHR software. Buch figured that if the software worked well, was free, and could promise doctors an easy way to secure their share of the stimulus money, there had to be a way to make a business of it. "He saw the curve a year or two in advance," Howard said.

Once the stimulus money started flowing, and Practice Fusion's membership base began to balloon, other investors loosened their purse strings. Peter Theil personally put in $1 million after a lunch with Howard, and later his Founders Fund added $23 million. Other investments followed, most recently in a $70 million series D funding that brought total capital raised to $134 million and got Howard talking about an IPO in the not-too-distant future.

In a recent interview with The Atlantic's James Fallows, famed venture capitalist John Doerr of Kleiner Perkins Caufield & Byers pointed to Practice Fusion as a prime example of his firm's investment in digital health, which he identified one of two key emerging technologies for the next decade, along with advanced battery tech.

The changes occurring in healthcare today are generally positive, "but it's happening in an incredibly complex market," Howard said. In one visit, a patient might interact with several members of a practice, have a prescription written and routed to a pharmacy, and have lab work ordered, plus a referral to an imaging center and to another specialist physician. "You can't deliver any value unless you can bring the entire ecosystem into the transaction," he said.

Many people need to collaborate on any given patient visit to achieve a favorable result, but a lot of those interactions are still relatively low tech. "We're still seeing 19 billion faxes per year in healthcare. This is one of the biggest challenges we have as an industrialized nation. We won't realize our real potential for the next five to 10 years until that starts to change." 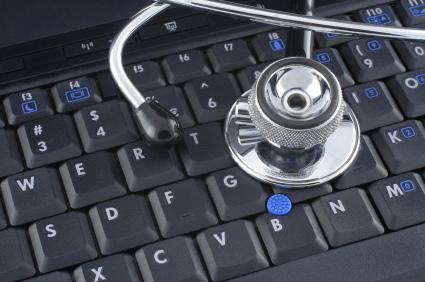 The real challenge with meeting some of the more aggressive Meaningful Use Stage 2 goals for patient engagement will have less to do with software design than patient engagement, Howard said. For example, one Stage 2 goal is to get more than 5% of patients to access their own health data through an online portal by viewing it, downloading it, or transmitting it to a third party. Delivering software that makes this possible is one thing; getting patients to actually do it is another.

Patients don't care about their health data unless they think they're dying, Howard said. "Then they care about it a lot." In other words, unless a practice caters to terminally ill patients, meeting the government's patient engagement goal may be difficult. "It's not going to work for everyone," he predicted.

Just getting patients to register on the website so they can see routine lab results can be a challenge, Howard said. "A medical record is like a tax return from a use case perspective -- you keep it in case you get audited, but if you're not getting audited you're never going to open that again. The solution is not simply for the online system to say, 'Here's your data.' It's a matter of how do you market to the patient?" he said. The strategy is going to have to be a lot more proactive than just pointing patients to a website and hoping for the best.

The obvious question here is whether this is too much of a consumer model for a task like managing medical records.
Reply  |  Post Message  |  Messages List  |  Start a Board
InformationWeek Is Getting an Upgrade!