Doctors should hire assistants to fill out electronic health records for them -- tagging along on exams if necessary -- to avoid job burnout, says ScribeAmerica. 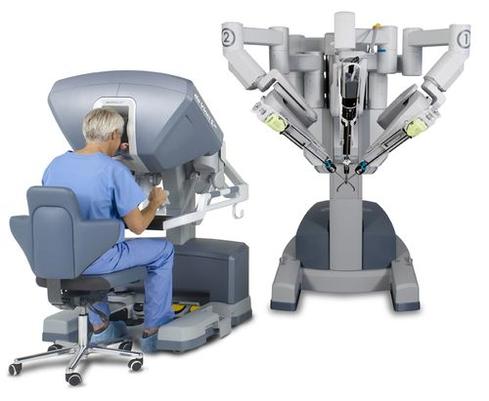 Surgical Robots: Look Who's Coming To The OR
(Click image for larger view.)

Is the electronic health record falling short of its promise and contributing to physician burnout because it saddles doctors with ever-increasing administrative tasks?

"Physicians feel taken away from patients and families," Murphy told InformationWeek in a phone interview. "They're spending three hours a night filling out [the EHR]."

Physicians today spend, on average, eight to 12 minutes per patient filling out the EHR, according to a number of studies.

But this data-entry duty is increasing with the Affordable Care Act (ACA) and other regulations that require EHRs, as well as the forthcoming update to ICD-1, Murphy said.

"Patient care will suffer as our physicians struggle to keep up with all of these demands," Murphy contends, adding that physician burnout is a real problem.

[Is there any hope for doctors and health IT to find true love? Read Doctors & EHR: Can This Shotgun Marriage Be Saved?]

A 2012 survey of more than 7,000 doctors found that 45.8% displayed at least one characteristic of burnout, and concluded physicians were at higher risk of burnout than other US workers.

ScribeAmerica currently has 3,700 discipline-specific scribes working in 350 hospitals in 40 states. For every two openings, the company interviews eight people, trains four, and graduates two, Murphy said, adding that 60% to 70% of them already are working toward degrees in medicine. 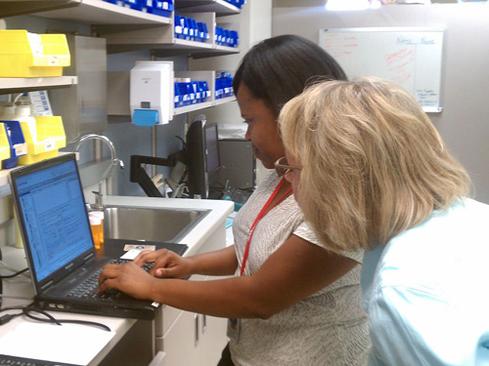 "With a scribe, you have real-time, in-parallel documentation," Murphy said. Not only does this free a doctor from the administrative task of filling out an EHR, it can capture activities and insights that might be lost if the EHR is filled out after the exam or procedure.

What about doctors who fill out the EHR during an exam, using a computer or tablet computer? Murphy cited a January study by Northwestern Medicine that found when physicians spend too much time looking at the computer screen they might miss nonverbal cues and communicate less well with patients.

Capturing every billable procedure on the chart is another major selling point of medical scribes.

According to Murphy, medical organizations using ScribeAmerica scribes increase their relative value units from 2.1% to 2.4%. RVUs are a measure of value used in the United States Medicare reimbursement formula for physician services.

Nowhere is efficiency more needed than in the emergency department, where patient scheduling isn't under the control of the business.

"In the ED, you get paid on throughput measures," Mulvey told InformationWeekin a phone interview. Improving the "left without being seen" rate, which can run as high as 10% in some hospital emergency rooms, has "a financial value," he said.  Medical scribes can improve these numbers, while improving documentation, compliance, and billing.

But the numbers don't always work.

At first blush, Dr. Kenneth Felz, an internist at Meriter Medical Clinic in Middleton, Wis., might seem an ideal candidate for ScribeAmerica's services.

Meriter deployed the EpicCare EHR software system three years ago, and Felz said he uses every automation tool available, including voice recognition, to streamline data entry into the system.

Even so, "I spend a lot of hours at home doing documentation," Felz told InformationWeek.

But Felz says he cannot cost-justify scribes for his primary-care operation, except perhaps for a handful of his clinic's most-expensive specialists.

Felz also raises a philosophical issue: "When you're in the exam room with patient, is it okay to have a third person in with you?"

ScribeAmerica's Murphy, not surprisingly, has a ready answer for this question.

"Patients may ask more questions,"  Murphy said, but suggested this is a benefit and can establish a "new flow and dynamic" between doctor and patient.

Ellis Booker has held senior editorial posts at a number of A-list IT publications, including UBM's InternetWeek, Mecklermedia's Web Week, and IDG's Computerworld. At Computerworld, he led Internet and electronic commerce coverage in the early days of the web and was ... View Full Bio
We welcome your comments on this topic on our social media channels, or [contact us directly] with questions about the site.
Comment  |
Email This  |
Print  |
RSS
More Insights
Webcasts
Protecting Your Enterprise's Intellectual Property
ROI and Beyond for the Cloud
More Webcasts
White Papers
From MFA to Zero Trust
Cyber Threats & Trends: Jan-June 2020
More White Papers
Reports
How Data Breaches Affect the Enterprise (2020)
2020 State of DevOps Report
More Reports

The medical fraternity is far from satisfied when it comes to EHR implementation. Last year has been very eventful for the Healthcare IT industry, with the widespread adoption of HIPPA, Hitech regulations and the approaching deadlines for Healthcare organizations to switch to EHRs have definitely led to some systems being implemented in a chaotic manner without due importance given to meaningful use, also aiding to this turmoil is the constantly changing regulatory landscape. Do let me know your views on this.

Having svribes won't solve the issue from its root. It will simply shif the onus from one user to another, and this is like accepting the current state of the systems and tryuing to make the best out of the worst situation. Though the thought is with good intention, one needs an approcah where EHRs are flexible, interoperable and can adapt to changing compliance requirements easily. Following up on this, I came across and registered for a webinar on Healthcare IT: Role of EDI in Affordable Care Act Reforms, it looks a promising one http://j.mp/1b4qJC3
Reply  |  Post Message  |  Messages List  |  Start a Board

My story doesn't go into it, but speech-to-text voice recognition software simply isn't at the point at which it can be a trustworthy dictation replacement. Add to this the increase by a factor of 10 in the coding that doctors will need to do (under the ICD-10 scheme, which goes live Oct. 1), and there's going to be period of real challenges, data-input-wise.
Reply  |  Post Message  |  Messages List  |  Start a Board

Isn't that ridiculous that you need to spend extra on the EMR systems, follow all so called meaningful rules  and hire extra  person to type for you, in the mean time, goverrnment and insruance companies are trying all their best to cut your reimbursement!
Reply  |  Post Message  |  Messages List  |  Start a Board

The need for scribes was more prominent with the implementation of earlier versions of EHR software systems which required someone to fill-up the patient forms. However, with changing technology, newer and more advanced EHR systems have come up which serve the automation purpose of doctors without employing a scribe. Check this out

This physician says YES! YES!YES! Entering my own data reduces my productivity 50%!!!  I have sitting here on my floor at home 24 records to enter into my EHR from the past 2 days of seeing patients. If there is no better solution than working two days every day to do my records on my own personal time, I will have a heart attack, stroke, sudden death, or mental breakdown. What if, when typewriters were invented, to have secretaries do the typing for the professional had been considered too expensive?

The current "type it yourself" is insane policy. I am tech literate as any medical person. If you have as your goal to put your doctor out of business (or die) keep making them type it themselves.
Reply  |  Post Message  |  Messages List  |  Start a Board

I hope this proves to be a transitional "technology" that fades away once more physicians figure out how to buy EHRs that are actually efficient for them to chart in.  They may not be the most widely installed, but I do believe they exist.
Reply  |  Post Message  |  Messages List  |  Start a Board

It seems like the financial obstacle to hiring/using these scribes is bigger than the patient-privacy one. No matter the cost-saving justification for these scribes, healthcare organizations still need to come up with the money to pay them as their other costs keep rising. But I wouldn't be averse to having such a helper in the room during doctor consultations, especially if that helper is studying for a medical degree. Think of it as a consultation at a teaching hospital.
Reply  |  Post Message  |  Messages List  |  Start a Board
Editors' Choice
Hot Topics