MedAllies, a provider of Direct secure messaging services and one of the founders of the Direct Project, has received accreditation from DirectTrust/EHNAC and is now a national health information services provider (HISP), according to company CEO John Blair III, MD.

The only state in which MedAllies does not provide Direct services, ironically, is New York, where it's based. That's because the New York eHealth Collaborative, which operates the statewide health information exchange, has purchased MedAllies' technology platform and is using it to form its own Direct network, Blair told InformationWeek Healthcare.

MedAllies's claim to be a national HISP, like that of e-prescribing connectivity firm Surescripts, rests on its affiliations with electronic health record (EHR) vendors. According to Blair, MedAllies is Allscripts's exclusive HISP and also provides non-exclusive Direct services to Epic, Meditech, NextGen, GE, and Siemens.

[Learn what's ahead for health IT. See 3 Trends Are Reshaping Healthcare IT.]

The other component enabling the formation of nationwide Direct networks is DirectTrust/EHNAC accreditation, which enables HISPs to exchange messages without having to make separate trust and security agreements with each other. Last fall, DirectTrust president and CEO David Kibbe predicted that by the end of 2013 vendors comprising 80% of the EHR market would be aboard. Blair said that five major EHR companies are in the process of having their own HISPs accredited. Half a dozen other HISPs that work with, but are not owned by, the EHR firms already have accreditation, he said.

What this means is that physicians and other providers that use different EHRs will be able to send and receive Direct messages between their systems. That will enable them to meet an important criterion of Meaningful Use Stage 2, which began Jan. 1. The government EHR incentive program requires them to exchange clinical summaries with other providers at transitions of care, such as hospital discharges and referrals to specialists. 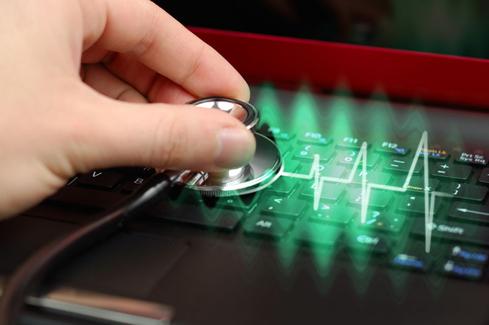 To attest to Meaningful Use, providers must use EHR technology that has been certified as conforming to the 2014 edition of the government's certification standards. These standards include the ability to exchange Direct messages. As a result of that mandate, Blair noted, the majority of physicians will soon have Direct-capable EHRs. It will take hospitals a couple of years to switch over, but he expects at least half of them to be Direct-capable this year.

All of this activity will greatly accelerate Direct adoption. MedAllies anticipates it will bring up 100,000 providers on its network this year, Blair said, adding that Direct usage will increase as the technology achieves critical mass. "I think you'll see the industry moving to this over the next 24 months. And as the penetration increases, there will be more usage."

Meanwhile, the standards for searching HISP directories for Direct providers' addresses are still being worked out. The Office of the National Coordinator of Health IT (ONC) has developed a specification called HPD Plus for this purpose, Blair said, and that should be finalized by spring. But there's still disagreement among experts about whether EHRs themselves should search the directories or whether EHR users should do that through their own HISPs.

In either case, Blair said, the Direct addresses of the intended recipients of Direct messages must be identified within subseconds so that physicians can send those messages within their EHR workflow. In fact, the reason why Direct is desirable to doctors is that they don't have to leave their workflow to exchange messages with other physicians or hospitals, he said.

In contrast, the secure clinical messaging that has long been available to members of health information exchanges (HIEs) requires users to switch out of their EHR and go to a web portal to send or pick messages. In MedAllies's work in helping 1,500 doctors in the Hudson Valley, N.Y., implement EHRs, "we were never able to get more than 18% of the doctors in the community to use clinical messaging," he said, because it wasn't part of their daily workflow.

In the Direct pilots that MedAllies has been involved in, Blair said, physicians have been much more willing to use clinical messaging because they can see their messages and respond to them as they're moving around their offices and seeing patients. That means they can respond to urgent requests as they emerge and can deal with all their messages before the end of the work day.

Direct only allows physicians to push messages to one another or to other providers. HIEs, in contrast, enable them to search for medical information on a patient. But in the experience of MedAllies, which has provided the infrastructure for an HIE for 14 years, the biggest users of the exchange are ER doctors and on-call doctors who have no information on certain patients.

While HIEs are needed for some purposes, Blair noted that HISP services are much less expensive than HIE membership fees. Typically, he said, HISPs charge $5 to $20 per provider per month or a similar amount in transaction fees.

With the emergence of a national Direct network, he added, no HISP has any greater reach than any other HISP, because they're all connected to the national network. The real distinguishing feature of an HISP will be the service it provides, including "the efficiency of onboarding providers, and its ability to get adoption and usage across communities. That's MedAllies' strength."

Ken Terry is a freelance healthcare writer, specializing in health IT. A former technology editor of Medical Economics Magazine, he is also the author of the book Rx For Healthcare Reform.

Metrics, data classification, governance, compliance -- and your vendors -- are all part of the risk management equation. Find out more on this Dark Reading report, "The Risky Business Of Managing Risk." (Free registration required.)

We welcome your comments on this topic on our social media channels, or [contact us directly] with questions about the site.
Comment  |
Email This  |
Print  |
RSS
More Insights
Webcasts
Unlocking the Ultimate Source of Truth in Cloud Security--Network Data
Using Artificial Intelligence, Deep Learning and Machine Learning for Cyber Defense
More Webcasts
White Papers
When and How to Best Leverage an MSSP
Steps Organizations Can Make to PIVOT to Business Agility
More White Papers
Reports
The Drive for Shift-Left Performance Testing
Cloud-Native Security Platforms: The Solution for the Digital Age
More Reports

If Blair is correct, the use of Direct will be widespread within two years. Sometime this year, it's likely that HISPs will have the capability to search directories of other HISPs anywhere in the country. And as HISPs get accredited, they should all be able to communicate with each other. So this scenario will probably become reality by 2015.
Reply  |  Post Message  |  Messages List  |  Start a Board

One of the scenarios where the national exchange of health data is particularly useful would be where you go on vacation to the other side of the country and need to visit a hospital or physican and would like your health data to follow you.