The high court issued a ruling that substantially changes the game in terms of the amount of damages that could potentially be paid out in a patent infringement lawsuit.

The US Supreme Court issued a ruling Monday that makes it easier for patent holders to seek enhanced damages in infringement lawsuits, which could potentially triple the size of damages awarded.

Under the unanimous decision, federal district courts will have more freedom to decide when to award enhanced damages. These types of punitive damages allow plaintiffs to seek an award that is three times the amount of actual damages in a case.

Prior to the ruling, federal district courts faced "unduly rigid" tests in determining whether punitive enhanced damages could be awarded in patent infringement cases, according to the court's opinion posted on its website.

The district courts previously had to apply a two-part test to determine if enhanced damages could be paid out. The first test required a plaintiff to prove that a company infringed on its patent, despite "an objectively high likelihood that its actions constituted infringement of a valid patent." And the second test called for the plaintiff to prove that the risk of patent infringement was "either known or so obvious that it should have been known." 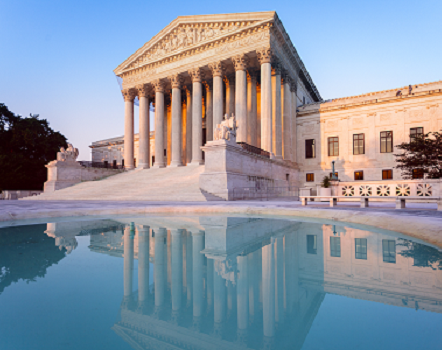 This two-part test that the federal appeals court largely relied on was born out of a concern that the district courts would easily and frequently dole out enhanced damages in patent infringement cases, according to the higher court. And, so, this two-stage test was designed to avoid distorting the balance between protecting patent holders and technology innovation.

But the Supreme Court clearly had issues with this notion.

"The principal problem with (the) two-part test is that it requires a finding of objective recklessness in every case before district courts may award enhanced damages," the high court stated. "Such a threshold requirement excludes from discretionary punishment many of the most culpable offenders, such as the 'wanton and malicious pirate' who intentionally infringes another's patent -- with no doubts about its validity or any notion of a defense -- for no purpose other than to steal the patentee's business."

As a result, the Supreme Court called on giving district courts more discretion to determine when enhanced damages can be awarded. However, it also acknowledged the importance of facilitating "imitation and refinement through imitation that is necessary to invention itself."

Following the court ruling, Jeffrey Heaton, vice president of Halo Electronics, said in a statement, "This win means that all patent owners -- no matter how big or small -- can better protect themselves from patent infringers and can be sure that infringers will be held accountable for their egregious conduct."

The Supreme Court case was of keen interest to the White House, which has been supportive of easier access to punitive damages, while technology titans Facebook and Google's Alphabet said tight limits on large damage awards would prevent frivolous lawsuits and have a chilling effect on innovation, according to a report in the Wall Street Journal.

Dawn Kawamoto is an Associate Editor for Dark Reading, where she covers cybersecurity news and trends. She is an award-winning journalist who has written and edited technology, management, leadership, career, finance, and innovation stories for such publications as CNET's ... View Full Bio
We welcome your comments on this topic on our social media channels, or [contact us directly] with questions about the site.
Comment  |
Email This  |
Print  |
RSS
More Insights
Webcasts
The Experts Guide to Ransomware Response
Multi-Cloud Data Management for Modern Applications
More Webcasts
White Papers
The Path to Successful Hyperautomation Starts With the Help Desk
Ransomware Security Breach Summary: Food Production
More White Papers
Reports
Protection Strategies for a Cyber-Resilient Organization
The State of Endpoint Security
More Reports
Copyright © 2021 UBM Electronics, A UBM company, All rights reserved. Privacy Policy | Terms of Service