On Tuesday, a coalition of companies and advocacy groups have scheduled a series of events around the world to urge governments to reform surveillance practices. The protest against mass surveillance, inspired by the months of revelations about the reach of the US National Security Agency and designated "The Day We Fight Back," was announced last month on the anniversary of the death of technology activist Aaron Swartz. It is also intended as a reminder of the defeat two years ago of the Stop Online Piracy Act, a recent high-water mark for online activism.

By midday Pacific Time, the coalition's website said that it has facilitated more than 37,900 calls and over 86,000 emails to legislators. A Google search for the JavaScript code particular to the coalition's protest banners suggests almost 1,000 of them have been placed on websites. Two dozen protests, rallies, meetings, and talks have been planned.

Participating companies include Automattic, CloudFlare, DuckDuckGo, Mozilla, Reddit, ThoughtWorks, and Tumblr, among others. The American Civil Liberties Union, the Center for Democracy & Technology, the Electronic Frontier Foundation, and Greenpeace are some of the advocacy groups involved.

Joining the protest are the major technology companies that banded together previously as the Reform Government Surveillance coalition: AOL, Apple, Facebook, Google, LinkedIn, Microsoft, Yahoo, and Twitter. The companies fear that unrestrained mass surveillance programs, such as those run by the NSA and other governments, will limit the willingness of businesses and consumers to entrust their data to online service providers. 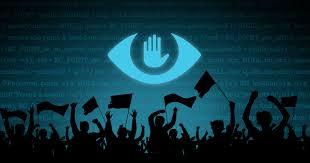 Google VP of public policy Susan Molinari said in a blog post that, while Google acknowledges the security issues faced by countries around the globe, the company believes threats should be dealt with through a fixed legal framework that's narrowly tailored, transparent, and subject to oversight.

Molinari says Google supports the passage of the USA Freedom Act, introduced last October, to limit bulk data collection and to add greater oversight and transparency to government surveillance programs. She also called for the passage of proposed reforms of the Electronic Communications Privacy Act (ECPA), to ensure that authorities obtain a warrant before demanding user data from online service providers.

Last month, President Obama announced five surveillance reforms intended to address concerns raised by critics of the government's intelligence-gathering practices. Some of changes he promised -- specifically, an end to the current way the government collects bulk telephone metadata -- overlap with the USA Freedom Act. But overall, the reforms fall far short of what the Internet community would like to see. A Day We Fight Back scorecard of the reforms rates them 3.5 out of 12.

Fighting back, it seems, will require more than a day.

Thomas Claburn has been writing about business and technology since 1996, for publications such as New Architect, PC Computing, InformationWeek, Salon, Wired, and Ziff Davis Smart Business. Before that, he worked in film and television, having earned a not particularly useful ... View Full Bio
We welcome your comments on this topic on our social media channels, or [contact us directly] with questions about the site.
Comment  |
Email This  |
Print  |
RSS
More Insights
Webcasts
Protecting Your Enterprise's Intellectual Property
Building the SOC of the Future: Next-Generation Security Operations
More Webcasts
White Papers
From MFA to Zero Trust
The State of Threat Detection and Response
More White Papers
Reports
2021 Top Enterprise IT Trends
Email Security Threat Report 2020
More Reports

Of course the foreign countries objecting to the NSA aren't going to make any commitments with regard to their own intelligence agencies and spying.
Reply  |  Post Message  |  Messages List  |  Start a Board

It's coming from a lot of different quarters though. Human rights courts in the EU are looking at Britain, there's congressman looking to reform legislation in the US, as well as states threatening to cut off power and water to the NSA headquarters unless they change their ways.

And that's on top of all the public protesting.
Reply  |  Post Message  |  Messages List  |  Start a Board

It's going to take a lot of effort to get serious reform of surveillance practices in the U.S., but it's good to see this effort gaining some steam.
Reply  |  Post Message  |  Messages List  |  Start a Board

I wonder if protest organizers ever considered fading to black as they did for the SOPA protests, back in 2012. Remember, when Google, Mozilla, and a bunch of other websites blacked out their home pages or used their sites to warn about SOPA? Would that have sent a bigger warning than encouraging people to contact their lawmakers? Or were they looking to rouse users into getting more involved (a good thing, IMHO).
Reply  |  Post Message  |  Messages List  |  Start a Board
Editors' Choice
Hot Topics