In a move to spur greater public participation in U.S. scientific research, the White House has announced three new initiatives in an updated version of its four-year-old Office of Science and Technology Policy Open Government Plan released this month.

"This plan builds off of the 2010 and 2012 Open Government Plans, updating progress on past initiatives and adding new subject areas based on 2014 guidance," U.S. Deputy CTO Nick Sinai and Corrina Zarek, senior advisor for open government, wrote in a June 2 blog post.

[Ready to get smart? Read Smart Government: All About Disruption.]

Federal agencies began publishing biennial open government plans in 2010 in keeping with an Open Government Directive issued the previous year. The plans, which are developed in consultation with civilian experts and the public, outline agency openness efforts and furnish details about specific open government initiatives.

OSTP advises the president on the effects of science and technology on domestic and international affairs, and also promotes open government throughout the Executive Branch.

The policy efforts set forth in OSTP's Open Government Plan Version 3.0 are built around the core principles of transparency, participation, and collaboration, Sinai and Zarek said.

The collections "play an important role in promoting public health and safety, homeland security, trade, economic development, medical research, resources management, education and environmental monitoring," states the report. "They are studied across diverse fields of research and are used and reused to validate and extend past research results as new analytical techniques develop." 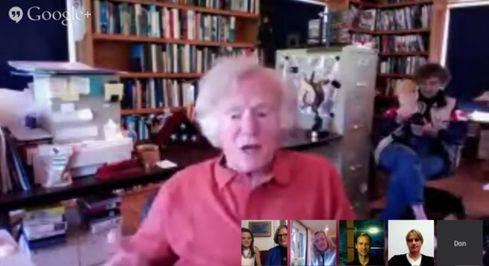 Lieutenant Don Walsh, pioneering deep sea explorer and oceanographer, participates in a We the Geeks hangout.

A second flagship effort will employ the Internet to connect the scientific research community through a new Google+ Hangout known as "We the Geeks." The hangout will feature presentations by leading experts in various realms of science, technology, and innovation who will lead discussions on tightly focused topics.

Those interested in participating in the "We the Geeks" conversations will be able to query presenters via Twitter by using the hashtag #WeTheGeeks.

The third flagship effort is an initiative known as "All Hands on Deck," which will bring together experts from all many fields -- government, industry, non-profits and philanthropy -- to expand STEM education for U.S. students.

The experts will bring their knowledge to bear for students through a variety of new and existing events, such as the annual White House Science Fair and the new White House Maker Faire.

The first Maker Faire, which will be held June 18, will showcase noteworthy efforts by young people who design and build something that they deem important. The event will include efforts in the STEM areas, as well as the arts and other educational areas. Young entrepreneurs and inventors who participate in the event will gain confidence and experience that will benefit them as they guide themselves toward future careers, according to the report.

Students also will benefit from access to the scientific collections, states the report. "For the American public, students and teachers, [the collections] are also treasure troves of information ripe for exploration and learning."

William Welsh is a contributing writer to InformationWeek Government. He has covered the government IT market since 2000 for publications such as Washington Technology and Defense Systems. View Full Bio
We welcome your comments on this topic on our social media channels, or [contact us directly] with questions about the site.
Comment  |
Email This  |
Print  |
RSS
More Insights
Webcasts
Architecting Security for the Internet of Things
Succeeding With Secure Access Service Edge (SASE)
More Webcasts
White Papers
Why Chatbots Are So Popular Right Now
Fact-Check Your Ransomware Assumptions
More White Papers
Reports
IDC FutureScape: Worldwide Digital Transformation Predictions
2020 State of Cybersecurity Operations and Incident Response
More Reports

Now that these initiatives have been under way for several years, how have they paid off? If you have a story about a company or a product or a career launched on the basis of this open access, please share.
Reply  |  Post Message  |  Messages List  |  Start a Board
Editors' Choice
Hot Topics