Net Neutrality: Too Much Spin, Not Enough Facts - InformationWeek

Let's move past 1990s regulations and preconceived notions about net neutrality and focus on modern ways to prevent anti-competitive behavior.

The latest spate of arguments around net neutrality reveals that the blind partisanship and BS bias are escalating. The comic strip site The Oatmeal saying that net neutrality is about "freedom" is just as mindless as the infamous tweet by Sen. Ted Cruz (R-TX) comparing net neutrality to Obamacare.

If we truly want broadband innovation, we need to start digging into the facts and opening ourselves to modern ways of doing things, instead of posturing and trying to squeeze today's Internet into a 1996 regulatory framework by classifying it as a Title II utility service. Let's review three facts:

Fact No. 1: Traffic management is a necessary evil.
Robert Atkinson, president of the Information Technology & Innovation Foundation, made some astute points in a column he wrote recently for InformationWeek, in which he argued that broadband shouldn't be treated like electricity or cable TV. "Some bits, like email bits, can handle high levels of latency," Atkinson wrote, "while others, like video telephony bits, can't." Exactly.

It's just about impossible to let folks be "free" with a non-free resource. Bandwidth costs capital investment money, as any network engineer will tell you. And basic economics tells us that demand for any desirable good or service approaches infinity as its price approaches zero.

[Worrying that technology will bring doom and destruction is nothing new. See 8 Doomsday Predictions From Yesterday And Today.]

If there's no traffic management, then the only way for an operator to keep up with Internet demand is to invest continuously in network equipment and physical plant. And at some point, those investments cease to make economic sense. Besides, being smart about traffic management, either as an enterprise network engineer or as a public network operator, creates a better experience for customers.

But the truth about traffic management is that it's hard and imperfect. And it will always upset someone, because the engineer or operator has to make judgment calls about which traffic streams need managing.

Traffic management isn't the same thing as anti-competitive behavior. Trying to regulate traffic management is like trying to pass a policy that regulates which types of conversations people may have in the workplace, and for how long. If we're trying to prevent (note that I didn't say "regulate") anti-competitive behavior, there are better, more modern ways to influence behavior. Let's start with data.

Fact No. 2: Data is only as accurate as interpretation.
Data influences behavior, but so does the way you present data. Various reports on Netflix download speeds have shown massive fluctuations, leading to an emotional outcry that the network operators must be intentionally throttling Netflix's traffic to force it into paying for speedier interconnects. But base values and long-term trends are where the facts are, and the findings there aren't nearly so upsetting or scandalous.

When your base values are only 1 and 2 Mbit/s, massive percentage changes are inevitable. The Washington Post's Wonkblog reports that Netflix-provided download speeds on Comcast dropped from around 2 Mbit/s to 1.5 Mbit/s between January and March 2013. That's (gasp) a 25% decrease.

But look at the graph below for Netflix-provided ISP download speeds for all of 2013 and 2014 year-to-date. I've highlighted some points on the graph via line thickness and dotted lines. (You can download the numbers for yourself here.) 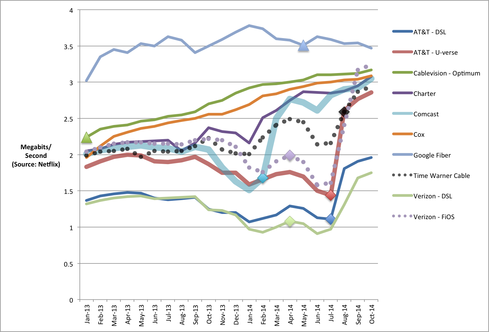 The diamonds mark the times when Netflix started paying an ISP for enhanced transport. The triangles are when the provider is using Netflix's free Open Connect peering arrangement. Some context questions may pop into your mind:

I have another question for the net neutrality faithful: Why is it OK for Netflix to invest in its own Open Connect peering arrangement (that costs Netflix money but doesn't cost the ISPs) in order to increase performance, but it's not OK for the service providers to ask Netflix to make a different type of investment?

Data is useful and influences behavior. Netflix is right to publish these stats; they keep service providers in line. I guarantee you that it's trotting out this performance data to cable companies and telcos in negotiations. But the data scarcely warrants the type of hysteria that John Oliver, The Oatmeal, and others have generated.

Comcast CEO Brian Roberts was recently quoted as saying that his company is a supporter of net neutrality. I don't take his assertion literally. I take it as: "We know that lots of people are watching us." The world has changed; it's impossible for a giant telco or cable company to get away with

Jonathan Feldman is Chief Information Officer for the City of Asheville, North Carolina, where his business background and work as an InformationWeek columnist have helped him to innovate in government through better practices in business technology, process, and human ... View Full Bio
We welcome your comments on this topic on our social media channels, or [contact us directly] with questions about the site.

Does anybody know if the FCC is continuing to use the SamKnows data that they contracted for a few years ago? (samknows.com)

The first engagement led to this report: http://www.fcc.gov/measuring-broadband-america

But I wonder if a more intense effort might be a good way to uncover collusion and anti-competitive behavior. I asked SamKnows back in February via email, and never got a response.
Reply  |  Post Message  |  Messages List  |  Start a Board

There is a difference between net neutrality in the sense that private users do not experience delays while surfing or getting content and special traffic at high speed as needed by science and business. A so called light path -a dedicated connection, will always be more expensive than s standard internet connection and for a good reason. As long as a high minimal speed is available to all users that is upgraded regularly (as is currently the case for most internet users) there is no need for net neutrality in the absolute sense.
Reply  |  Post Message  |  Messages List  |  Start a Board

I actually had an email conversation with a reader, Brian H, about this. He says:


Here's an idea.  Maybe there's something to build upon.

Let the FCC publicize service levels for as many ISPs as they can identify, and publish the data in Google Charts format to make it easily digestible.  The data collection could be automated and out of the hands of the ISPs, both to prevent manipulation and regulatory burden.  Automation keeps the reporting system lean and current too.

It's not competition and won't necessarily deliver results into the hands of consumers.  At least it's something though.  And I can virtually guarantee, the large carriers won't like the way it makes them look.  For the small regional players like ERC Broadband, should they be delivering better value for their customers, it could be a way of recognizing and acknowledging that value (though of course the primary responsibility of such reporting would be vendor neutral and consumer information).

As you know, I totally agree with that.

Municipal broadband is one government intervention that could start to solve the problem. (FCC chair Wheeler is in support of this and says that he's going to tackle state laws that prohibit this practice). Muni broadband is not the right solution for every community BUT for some communities it will reduce the stranglehold that the big providers have on the marketplace. That is a far better type of government intervention than over-regulating the Internet.
Reply  |  Post Message  |  Messages List  |  Start a Board

The biggest problem is the lack of competition. Count yourself lucky when you live in an area that is served with broadband by the local cable company AND the phone company. From what I learned, in most places this would be considered pure luxury if there is broadband to be had to begin with.

As long as there are only one or two providers the existance of breakfast cartels is a given. If there is no radical change on how many ISPs operate in any given region we will continue overpaying for mediocre service.
Reply  |  Post Message  |  Messages List  |  Start a Board

Such convoluted mental gymnastics all in order to justify the implementation of a two-tiered internet.  For the past 20 years, the internet has been the only medium in which all players, regardless of how deep their pockets are, could compete.  Now the service providers want to install fast lanes based on the ability to pay (the Netflix shakedown is a case in point) and erect a dirt road for all others without the jack to pay the vig, and the writer of this piece is full on in support of it in the name of "network management."  It's laughable and makes me wonder how much Comcast et al. are paying him to publish such rubbish to further their causes.
Reply  |  Post Message  |  Messages List  |  Start a Board

This remindes me of the old economics debate.... well if those robots take our jobs, then? ;)
Reply  |  Post Message  |  Messages List  |  Start a Board

re: "But I do think that we over-emphasize the anti-competitive activities, and under-emphasize that some level of investment is needed when we want to do things like increase video quality."

Well, we've certainly NOT over-empahsized the anti-competitive activities. I don't think the general public (as poor as their perception of the telcos is) knows the half of it.

And regarding the 'level of investment'... what the $#*@($& have they been doing with with all the money? I think we're well aware of that. We just wonder (well, we know, it's called monopoly effect) how such insanely profitabile businesses in the technologically advanced USA could be so far behind the rest of the world.
Reply  |  Post Message  |  Messages List  |  Start a Board

I completely agree with you that what we're likely to get won't be 'Net Neutrality.' The government will almost certainly try to slip a bunch of baloney in to get control of the content, just like the telcos are currently trying to figure out how to tailor the content to support their wishes.

Without REAL Net Neutrality principals and regulations in place, yes, it's going to be the equivalent of governmentizing a failed health-care system. It's a great analogy, actually in that regard.

But, just as silly, is the idea that regulation isn't needed. We need regulation. It just has to be proper regulation. And, I think we're currently faced with a bad or worse kind of choice.

But, that isn't the fault of the principals of Net Neutrality. It's because we're faced with a choice between corporate monopoly and horrible government control.
Reply  |  Post Message  |  Messages List  |  Start a Board
Page 1 / 3   >   >>
Editors' Choice
Hot Topics