Google makes Crimea part of Russia on the Russian version of Google Maps and draws protests and scrutiny.

Russia's ongoing dispute with Ukraine, which so far has led to the annexation of Crimea, has presented Google with a problem: how to draw national borders in Google Maps at a time when there's no consensus.

Google claims that it draws its maps fairly and adjusts local versions as required by local laws. "Google Maps makes every effort to depict disputed regions and features objectively," a Google spokesperson told us in an email. "Our Maps product reflects border disputes, where applicable. Where we have local versions, we follow local regulations for naming and borders."

But Äventyret founder Stefan Geens, who has followed Google's mapping services for years through his blog Ogle Earth, took issue Tuesday with the malleability of borders on Google Maps. He argues that Google has created a version of Google Maps that depicts Crimea as part of Russia to avoid conflict with authorities in Russia and to reflect what local populations want to see. 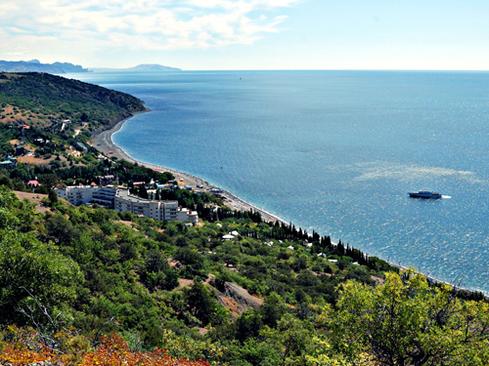 Geens says Google's explanation that it follows local laws to draw local map versions is "wholly disingenuous, because it does not apply to Russia, where there is no law that compels local map publishers to show Russia's borders in a certain way."

Google did not respond to a request to confirm that its Crimea map variations are required by law.

Geens says that, even though Google might have reason to fear legal action -- specifically from a Russian law passed this year that granted the Russian Federal Mass Media Inspection Service the right to shut down websites that support unsanctioned protest and from limits on propaganda in Russia's Article 29 -- the company appears to be trying to avoid a boycott from Google users in Russia who support the annexation and to protect employees in the country.

To support his view that Google is acting on expediency, rather than legal coercion, Geens observes that Google Maps in Ukraine also differs from the international version in ways that reflect popular Ukrainian sentiment.

Yuriy Gorodnichenko, associate professor of economics at the University of California at Berkeley and a native of Ukraine, criticized Google's approach. "This policy is completely wrong," he said in a phone interview. "We should follow what the United Nations says. From any legal standpoint, Google should not do it. They should not identify Crimea as part of Russia."

Last month, the UN condemned Russia's annexation of Crimea and adopted a resolution supporting the territorial integrity of the region.

Gorodnichenko said that citing popular support as the justification for redrawing borders should be viewed with skepticism. In far eastern Russia, for example, there's a huge Chinese minority that would be happy to be part of China, and that sentiment is not reflected on Google Maps. He also said that the integrity of referendum held in Crimea to measure popular support for joining Russia was dubious.

Google says its mission is "to organize the world's information and make it universally accessible and useful." Regarding disputed geographic data, the company's mission appears limited to making locally appealing versions of that information locally accessible.

Geens said in an email that he wanted to document how Google for the first time has created a local version of a map that deviates from its international map for nonlegal reasons.

"I can only guess at the motivation, but if it is to save the company's skin amid a sudden and rapid upsurge of jingoism, then I can certainly understand it," he said. "However, I would still expect Google to be transparent in its actions, not pretend it has legal cover for something it has been merely cowed into doing by threats of a boycott."

Geens expects that if the conflict drags on and Russia moves to annex the eastern third of Ukraine, "Google's situation will become increasingly untenable, and that it will eventually need to exit the Russian market much as it did China, on the grounds that the country is fundamentally incompatible with Google's vision of Internet freedom."

Far from fading away in the face of consumer-class competition from Google, Skype, LinkedIn, and others, unified communications is enjoying new relevance in enterprises -- there's even an SDN connector for UC. To reflect these updates, InformationWeek revamped its UC survey for 2014. Take part in the InformationWeek 2014 Unified Communications Survey and be eligible to win a great prize. Survey ends April 18.

Thomas Claburn has been writing about business and technology since 1996, for publications such as New Architect, PC Computing, InformationWeek, Salon, Wired, and Ziff Davis Smart Business. Before that, he worked in film and television, having earned a not particularly useful ... View Full Bio
We welcome your comments on this topic on our social media channels, or [contact us directly] with questions about the site.
Comment  |
Email This  |
Print  |
RSS
More Insights
Webcasts
Cybersecurity Risk Management
Managing a Hybrid Cloud Infrastructure
More Webcasts
White Papers
2020 SANS Enterprise Cloud Incident Response Survey
The Top 5 Mistakes Everyone is Making in Vulnerability Remediation
More White Papers
Reports
The State of CCPA 2021
2021 Top Enterprise IT Trends - Network Computing
More Reports

If I ran Google, I wouldn't have been so quick to make this change if, indeed, a change was warranted yet. It seems to have been an act to appease Russia, a much bigger market than Ukraine (with or without Crimea). As we know, the winners write history -- and in this case the "winners" have successfully lobbied to change geography.
Reply  |  Post Message  |  Messages List  |  Start a Board

It is a tricky area and Google (as well as other businesses) will be scrutinized and, as someone else said earlier, condemned no matter which path they choose. Really, I suppose it's up to Ukranians to decide, not us or an American tech company. But since Google is in the information business they need to include the most current data. No doubt Google execs spent a lot of time in making this decision, one they may have to revisit as the situation warrants.
Reply  |  Post Message  |  Messages List  |  Start a Board

I totally agree with you, @cumulonimbus. The whole situation in Crimea -- all of Ukraine for that matter -- reminds me of the situation in Czechoslovakia when I was a little girl. My dad, a ham radio operator, was chatting via Morse code with a Czech as the Russian tanks rumbled into Prague. The Czech frantically transmitted news of the invasion, calling out to the world for help while Dad replied, helpless from our home in England. Suddenly, the Czech's radio broadcasts stopped, mid-transmission. It was one of the very few times I saw my father cry.
Reply  |  Post Message  |  Messages List  |  Start a Board

I gotta agree with SaneIT here. Google isn't the UN. It's not in the business of making calls on national sovereignty. It seems to be handling the matter about as well as it can.
Reply  |  Post Message  |  Messages List  |  Start a Board

Yes, 96.77% of Crimeans voted to leave Ukraine. And they used to get similar majorities in national "votes" in Libya and Iraq under the Muammar Gaddafi and Saddam Hussein regimes.
Reply  |  Post Message  |  Messages List  |  Start a Board

Google's "mission appears limited to making locally appealing versions of that information locally accessible." Well said. Somehow, technology companies, given a choice between standing up for their core values  versus making headway in a new market, always seem to make the same choice. This is a reminder of how the ethics of technology use is too important to be left up to the technology companies.
Reply  |  Post Message  |  Messages List  |  Start a Board
Editors' Choice
Hot Topics