"Government Outreach fits the mold on a number of issues we think are important," Accela CEO Maury Blackman said in an interview. "Our solutions are about moving from just a transaction into an engaged relationship."

Like businesses, government agencies are being challenged to meet the Amazon Test (whether your organization is as easy to do business with as Amazon). When you order a product online, Amazon keeps you informed about whether it has shipped and when it ought to arrive. When you apply for a government permit, your application often seems to vanish into a black hole.

Citizens and business people are interacting with Amazon, FedEx, Uber, and other digitally savvy firms "and asking, why can't government act like this," Blackman said. "It's a totally different dynamic than we've seen in software for government."

A year ago, Accela raised $40 million in a fourth round of venture capital investment intended to help it broaden its platform. It has spent that money on a series of acquisitions of creators of cloud software for government, including Kinsail (recreation and resource management), Envista (right-of-way management), IQM2 (legislative management), and now Government Outreach, which is being rebranded Accela Citizen Relationship Management.

The Government Outreach apps are in a category with SeeClickFix and others targeting government interaction with citizens for such things as reporting a pothole that needs to be fixed. Just as citizens expect businesses to allow them to interact via the web and mobile apps, they want digital government services to do more than provide a phone number to call (and be put on hold), Blackman said. The legislative management product Accela added applies similar thinking to citizen input to boards and agencies, providing an alternative to the traditional visit to Town Hall. "It's a little old-school to think people have the time to go downtown and sound off in these meetings," Blackman said, and yet people still want to have their say.

Accela's strongest product offerings are in land management and permit management, particularly the interaction between building contractors and civic departments. Customers are primarily cities and counties, although Accela has moved up the governmental ladder to secure clients like State of New York (hunting and fishing licenses) and the Internal Revenue Service (small business registration). 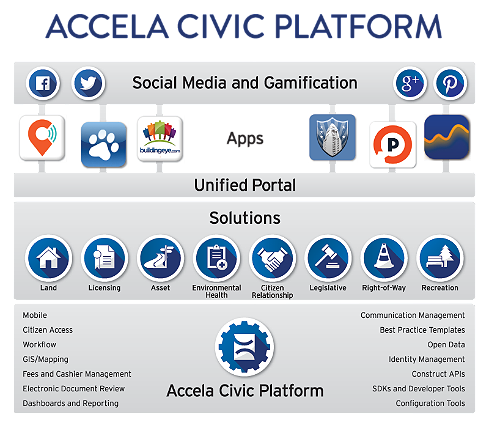 Accela offers cloud software, although the State of Oregon is an example of a customer that had the company configure the software to run in a government-controlled data center. Blackman said the firm aspires to be a platform player, making its Civic Platform a government equivalent of Salesforce.com's Force.com cloud platform as a service. While government organizations typically want to buy a packaged software solution for a given purpose, they like knowing there is a broader platform under the covers allowing them to modify or extend that service as needed, Blackman said.

Government does carry some burdens that an Amazon.com does not, Blackman said. For example, an Amazon can launch a new online product, watch it fail, and move on. Google is even more famous for launching products and killing the weak ones. But if a government application fails to perform, it's on the front page, and whoever was in charge of the project is called on the carpet for "wasting taxpayer money," he said. So no wonder governments tend to move slowly and with a heightened concern for issues like application security.

As a tech company catering to government, Accela hopes to "bridge the gap between what citizens want and what governments need," Blackman said.

With its CivicData.com website, Accela is also assisting government organizations participating in the open data movement -- the routine publication of government data in machine-readable form for use by businesses and other outsiders.

"We believe in the future you're going to see a lot more mergers between government data and apps like Yelp." For example, said Blackman, you might want to combine diner ratings from Yelp and OpenTable with reports from the local health department before deciding whether to dine at a particular restaurant.

David F. Carr oversees InformationWeek's coverage of government and healthcare IT. He previously led coverage of social business and education technologies and continues to contribute in those areas. He is the editor of Social Collaboration for Dummies (Wiley, Oct. 2013) and ... View Full Bio
We welcome your comments on this topic on our social media channels, or [contact us directly] with questions about the site.
Comment  |
Email This  |
Print  |
RSS
More Insights
Webcasts
Defense and Response Against Insider Threats & User Errors
Succeeding With Secure Access Service Edge (SASE)
More Webcasts
White Papers
Why Chatbots Are So Popular Right Now
5 Key Steps for Assessing Your Security Effectiveness
More White Papers
Reports
2021 Top Enterprise IT Trends
Threat Intelligence Spotlight: Hunting Evasive Malware
More Reports