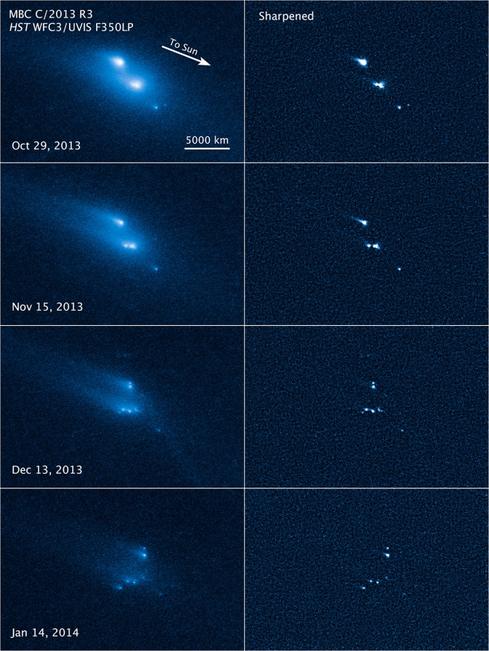 A closer look at asteroids
In March, NASA released a series of images (above) of the breakup of an asteroid into as many as 10 pieces, as observed by the Hubble Space Telescope. (The observations were actually recorded in 2013.) The disintegration was apparently not the result of a collision between two space rocks, which would have been more cataclysmic and sudden. Instead, scientists think it represents the final result of erosion caused by the radiation of the sun.

In January, the Herschel space observatory, another orbiting telescope, recorded the first definitive evidence of water vapor on Ceres, the largest asteroid in the solar system. Hershel is a European Space Agency mission that operates with support from NASA.

Though Ceres is large enough that it could also be considered a slightly underweight planet, many of these rocky bodies are more like the size of a mountain. Most orbit between Mars and Jupiter, but some cross closer to Earth, and one that connected with our planet is thought to have caused the extinction of the dinosaurs. Some of the mission plans NASA is considering involve visiting an asteroid, or perhaps capturing a small one to tow into Earth orbit for further study.

I know it was only a 4.5 hour flight -- shy of the achievements of John Glenn's Friendship 7 back in 1962 -- but I was heartened to see the Orion launch last week, which marked the return of NASA to the launch business and, soon, manned space flight. Catch this launch video on YouTube. It's only seven minutes, but watching it makes me feel like a kid again watching Apollo missions.
Reply  |  Post Message  |  Messages List  |  Start a Board
Editors' Choice
Hot Topics