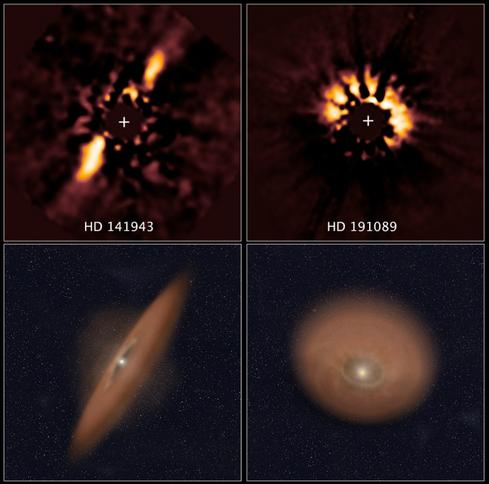 Planetary disks on Hubble's backup tapes
While new space observatories are returning exciting results, the venerable Hubble Space Telescope, launched in 1990, continues to perform. Even observations from years ago are turning up previously unknown information. In April, NASA announced that a forensic analysis of old images had turned up two planetary disks, the orbiting clouds of gas and dust that gather where planets are being formed.

That was something scientists were hoping to find when they first pointed Hubble at those stars between 1999 and 2006, after being tipped off from observations from another space telescope in the 1980s. No disks were detected at the time, but when the pictures were run through newer image processing software, including algorithms originally designed for facial recognition, researchers were able to unequivocally see the disks and even determine their shapes, according to NASA.

(Above: Enhanced Hubble images and illustrations of the corresponding planetary disks they represent)

I know it was only a 4.5 hour flight -- shy of the achievements of John Glenn's Friendship 7 back in 1962 -- but I was heartened to see the Orion launch last week, which marked the return of NASA to the launch business and, soon, manned space flight. Catch this launch video on YouTube. It's only seven minutes, but watching it makes me feel like a kid again watching Apollo missions.
Reply  |  Post Message  |  Messages List  |  Start a Board