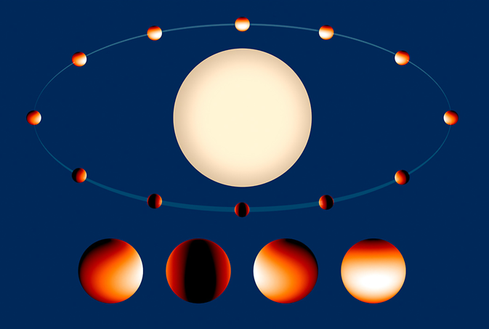 Planets outside our solar system
The first confirmed discoveries of planets outside our solar system, based on observations from the Kepler space observatory, began in 2009. But in 2014, the trickle turned into a flood thanks to new techniques in statistical analysis. On one day in February, the Kepler mission announced the discovery of 715 new worlds. The ESA's Hershel orbiting telescope has also gotten into the act.

The distant planets are too dim to be observed directly, so the strategy is to detect their shadows -- slight variations in the light from a star indicating that a planet is passing by.

(Above: ESA/NASA illustration of the mapping of an extrasolar planet)

I know it was only a 4.5 hour flight -- shy of the achievements of John Glenn's Friendship 7 back in 1962 -- but I was heartened to see the Orion launch last week, which marked the return of NASA to the launch business and, soon, manned space flight. Catch this launch video on YouTube. It's only seven minutes, but watching it makes me feel like a kid again watching Apollo missions.
Reply  |  Post Message  |  Messages List  |  Start a Board
Editors' Choice
Hot Topics

Conversational AI Comes of Age Guest Commentary, Guest Commentary,  8/7/2020
White Papers
[Forrester Research] The State of Data Security & Privacy
[Cybersecurity] 6 Misconceptions About Collective Defense
Database Security in the Cloud
How to Architect and Build Highly Observable Systems
WFH Is Dead. Long live WFA. But What Does that Mean for IT?