50%
Tweet
David Bowie's famous question -- "Is there life on Mars?" -- remains unanswered, but NASA says it has found the key to life flowing across the planet's surface.

The space agency announced Sept. 28 it has found evidence of water intermittently flowing on the surface of Mars.

"Our quest on Mars has been to follow the water, in our search for life in the universe, and now we have convincing science that validates what we've long suspected," John Grunsfeld, astronaut and associate administrator of NASA's Science Mission Directorate in Washington, wrote in a statement. "This is a significant development, as it appears to confirm that water -- albeit briny -- is flowing today on the surface of Mars." 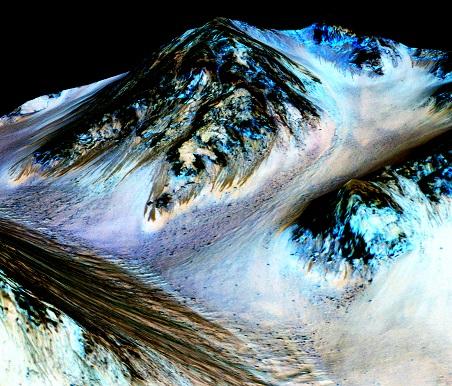 Using an imaging spectrometer on MRO, researchers detected signatures of hydrated minerals on slopes where mysterious streaks are seen on the Red Planet.

The streaks appear to ebb and flow over time, darkening and appearing to flow down steep slopes during warm seasons, and then fading in cooler seasons.

The observations taken by the MRO's spectrometer also show signatures of hydrated salts at multiple RSL locations, but only when the dark features were relatively wide.

When the researchers looked at the same locations when RSL weren't as extensive, they detected no hydrated salt.

"We found the hydrated salts only when the seasonal features were widest, which suggests that either the dark streaks themselves or a process that forms them is the source of the hydration," Lujendra Ojha of the Georgia Institute of Technology in Atlanta and lead author of a report on these findings, said in a statement. "In either case, the detection of hydrated salts on these slopes means that water plays a vital role in the formation of these streaks."

In these latest findings, Ojha and his co-authors interpret the spectral signatures to be caused by hydrated minerals called perchlorates, which have been shown to keep liquids from freezing even when conditions are as cold as minus 94 degrees Fahrenheit.

Perchlorates have previously been seen on Mars. Both NASA's Phoenix lander and Curiosity rover found them in the planet's soil. This is the first time perchlorates have been identified from orbit.

On Earth, naturally produced perchlorates are concentrated in deserts, and some types of these chemicals can be used as rocket propellant.

"When most people talk about water on Mars, they're usually talking about ancient water or frozen water," Ojha said. "Now we know there's more to the story. This is the first spectral detection that unambiguously supports our liquid water-formation hypotheses for RSL."

The space agency has been on a roll lately with spectacular revelations about our solar system. The latest images of Pluto's surface show a multitude of previously unseen topographic and compositional details, including a vast rippling landscape of peculiar, aligned linear crests that have taken NASA scientists by surprise.

Nathan Eddy is a freelance writer for InformationWeek. He has written for Popular Mechanics, Sales & Marketing Management Magazine, FierceMarkets, and CRN, among others. In 2012 he made his first documentary film, The Absent Column. He currently lives in Berlin. View Full Bio
We welcome your comments on this topic on our social media channels, or [contact us directly] with questions about the site.
Comment  |
Email This  |
Print  |
RSS
More Insights
Webcasts
Enterprise Database Strategies for 2020
Now That Ransomware Has Gone Nuclear, How Can You Avoid Becoming the Next Victim?
More Webcasts
White Papers
DevOps for the Database
Wired vs. Wireless LAN Solution
More White Papers
Reports
Online Threats -- and What Your Org Can Do About Them
[Special Report] Remote Network Management
More Reports

Like many no doubt, I grew up hearing the importance of water on Mars as an indicator of life beyond earth. I had some comprehension of the weight of that question even back then. To hear about it finally coming full circle gives a potent reminder of how far technology has brough us in my  lifetime. Not just that it was discovered, but the high resolution of the images in question, the ability to read about the news online imediately, and to share my opinion with others. My understanding is that this mineralized water itself is still very cold and doesn't necessarily indicate support of life on mars - but it's discovery is a monumental milestone nonetheless.
Reply  |  Post Message  |  Messages List  |  Start a Board

@progman2000 I didn't know about The Martian. It's already on my watch list. Thanks for that.
It looks like an awesome movie. IMDB has a 8.6 rating on it!
Reply  |  Post Message  |  Messages List  |  Start a Board

@SunitaT0 The conspiracy theory looks interesting. Mars has a very nice weather in summer 27° C (80° F). So, it is believable from that point of view. But, I will read about it. Any link you might know to where to find more info?
Reply  |  Post Message  |  Messages List  |  Start a Board

> However when they were on the verge of destruction, they had to ensure the
> continuity of their civilization and therefore they sent emergency pods to earth
> consisting of their DNA. I know this is by a long shot but some people agree that
> we "humans" are actually the remnants of the Martian DNA. Which means we are
> the aliens.

I see here a plot of Hollywood movie - a controversial one. I see the movie getting lot of attention from both evolutions and creationists.

WHO WE ARE and WHERE HAVE WE COME FROM are golden questions from timeless age!
Reply  |  Post Message  |  Messages List  |  Start a Board

This is awesome - the tech related boards have the best planetary discussions.

Kind of off topic: Is everyone else psyched that 'The Martian' releases tomorrow?  Awesome book!!!
Reply  |  Post Message  |  Messages List  |  Start a Board

@Yayaland, Re: "However I do believe humans have originated from alien DNA." I suppose you might be right. Anything is possible.
Reply  |  Post Message  |  Messages List  |  Start a Board

@yayaland, Interesting, but the seasons on Mars must manifest differently though.
Reply  |  Post Message  |  Messages List  |  Start a Board

@SunitaT0: Haven't heard about that theory. However I do believe humans have originated from alien DNA. Our closest ancestors are chimpanzees and they would take around 60 thousand years of evolution to look like us.
Reply  |  Post Message  |  Messages List  |  Start a Board

@AngelFuego: Mars has seasons just like Earth, but since the Martian year is longer than earth year, seasons are longer as well. Earth and Mars are in the green zone of the solar system, i.e. they are the only two planets which gets enough sunlight for it to have sprouting life.
Reply  |  Post Message  |  Messages List  |  Start a Board

@kstaron: There is flowing water, which means that the surface temperature of Mars is warm enough to keep water in liquid state, since Mars does not have an atmospheric blanket. Although flowing water is a positive sign that life can be there, I think some form of micro organisms and algae can be present, since some micro organisms can withstand extremeties of pressure, temperature and radiation.
Reply  |  Post Message  |  Messages List  |  Start a Board
Page 1 / 2   >   >>
Editors' Choice
Hot Topics