This week saw the official launch of LinkNYC, New York City's bold plan to add thousands of free public WiFi hotspots around the city. The first access points were installed in December, but Tuesday, Jan. 19, was the first day the network could be used to connect to the Internet. The project, a collaboration between the de Blasio Administration, Qualcomm, Intersection, and CIVIQ Smartscapes, aims to connect New Yorkers with gigabit fiber by transforming old pay phones into powerful wireless hubs.

LinkNYC is kicking off in beta phase and plans to add functionality and services over time. The organization says it will distribute "at least 4,400" kiosks in Manhattan, Queens, Brooklyn, the Bronx, and Staten Island by 2020. Some 516 of the kiosks will be up and running across all five boroughs by July 2016. LinkNYC hasn't said when it expects all 7,500 kiosks to be operational.

Each kiosk is a connectivity powerhouse. The all-new, purpose-built fiber network delivers speeds 100 times greater than most public WiFi hotspots. These hotspots can support hundreds of users at a time. The kiosks also include Android-based, ad-supported tablets that can be used to surf the Internet for free and to access city services, transit maps, and more. 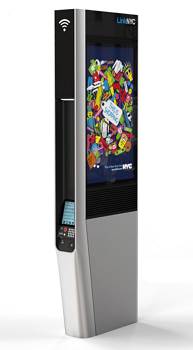 Free voice calls to any location in the US are possible thanks to a partnership with Vonage. New Yorkers can make international calls via calling card if they wish. The kiosks include directional speakers for calls, but they also support personal headphones for privacy. They feature a dedicated red button for calling 911.

Running low on battery power? The kiosks will all include two, power-only USB ports that can be used to charge personal devices, such as smartphones or tablets. The USB ports cannot exchange data between mobile devices and the LinkNYC kiosk itself.

The kiosks are built to be tough. They can withstand extreme heat and cold, rain, snow, flooding, earthquakes, vandalism, and theft. The sidewalls of each kiosk feature a 55-inch display for public service announcements and, of course, advertisements.

You might be wondering just how secure these things are. The kiosks provide two networks, LinkNYC Free WiFi and LinkNYC Private. First-time users must log in via the LinkNYC Free WiFi network. The network is open, but is encrypted and relies on SSL security to prevent third-parties from spying on bits as they flow between your device and the hotspot.

All devices should be able to remember and connect to either type of LinkNYC hotspot after the first use. The city says it "will never sell any personally identifiable information or share [data] with third parties." That's reassuring.

The initial batch of kiosks are spread sparingly around the city. In Manhattan, for example, LinkNYC is starting with 3rd Ave. and 8th Ave. above 14th Street and moving north. A small section of northern Manhattan will be covered as well. Other neighborhoods around the city on the kick-off list include the South Bronx; Jamaica, Queens; Flatbush Ave. in Brooklyn; and St. George, Staten Island.

Eric is a freelance writer for InformationWeek specializing in mobile technologies. View Full Bio
We welcome your comments on this topic on our social media channels, or [contact us directly] with questions about the site.
Comment  |
Email This  |
Print  |
RSS
More Insights
Webcasts
Building Asset Management into Your Enterprise Security Strategy
SASE: The Right Framework for Today's Distributed Enterprises
More Webcasts
White Papers
Cloud Threats Are Different, Your Security Should Be Too
2021 Application Security Statistics Report Vol.2
More White Papers
Reports
Protection Strategies for a Cyber-Resilient Organization
The State of DevSecOps Report
More Reports