50%
Tweet
Immigration and Customs Enforcement launches Android and Spanish-language versions of Operation Predator, a mobile app the public can use to help the agency catch child predators.

When Immigration and Customs Enforcement (ICE) released its Operation Predator app for Apple devices in September 2013, the agency's Homeland Security Investigations (HSI) unit apprehended a suspected child predator featured in the app within the first 36 hours of the launch.

As the name suggests, Operation Predator enlists the public's help in locating and identifying child predators, and it's the first federal law enforcement mobile app of its kind, said an ICE spokesperson. Now ICE is expanding the app to Android devices on Google Play in an effort to increase public outreach. To expand the app's scope further, the agency also launched Spanish-language versions for Apple and Android smartphones this week.

The app houses a database of suspects, including their names, their photos, where they were last seen, and the reason they're wanted -- such as possession and distribution of child pornography and sex-trafficking children. Users can receive alerts on their smartphones about wanted predators, share information via social media, and assist HSI by calling or submitting an online tip.

ICE is just one example of how agencies are extending their services to the public via mobile apps. More than 100 government-created apps are available on Apps.USA.gov. They're organized into topics such as health, reference, utilities, and navigation. Most government apps are designed to serve and educate the public or, in ICE's case, enlist the public's help. 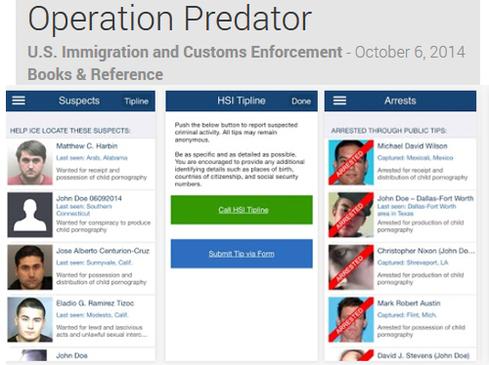 The federal government frequently launches apps to meet the goals outlined in the Digital Government Strategy, which requires agencies to produce mobile versions of at least two priority customer-facing services. The majority of apps that initially appeared on Apps.USA.gov were designed for iPhones and Android smartphones. The site has grown to include more BlackBerry and Windows Phone apps, though that list is still short.

Besides offering support for more operating systems, agencies have other roadblocks to overcome as they continue to launch apps, particularly when it comes to the cost of native app development. Agencies might have to move to a "build-once, deploy-anywhere approach in which agencies can rapidly convert mobile-optimized web pages into mobile apps that can be deployed across multiple platforms," Brian Paget, technical director for content and analytics at Adobe Agencies, wrote in an InformationWeek Government article in May. Such a strategy would significantly reduce the cost of developing cross-platform apps and reduce the development process, he said.

Join us at GTEC, Canada's government technology event. More than 6,000 participants attend GTEC -- Government Technology Exhibition And Conference each year to exchange ideas and advance the business of information and communications technology (ICT) in government. Don't miss thought-provoking keynotes, workshops, panels, seminars, and roundtable discussions on a comprehensive selection of ICT topics presented by leading public sector and industry experts. Register for GTEC with marketing code MPIWKGTEC and save $100 on entire event and conference passes or for a free expo pass. It happens Oct. 27 to 30 in Ottawa.

Elena Malykhina began her career at The Wall Street Journal, and her writing has appeared in various news media outlets, including Scientific American, Newsday, and the Associated Press. For several years, she was the online editor at Brandweek and later Adweek, where she ... View Full Bio
We welcome your comments on this topic on our social media channels, or [contact us directly] with questions about the site.
Comment  |
Email This  |
Print  |
RSS
More Insights
Webcasts
Now That Ransomware Has Gone Nuclear, How Can You Avoid Becoming the Next Victim?
Why Performance Testing is More Critical Today
More Webcasts
White Papers
2019 Software Exploits, a Technical Deep Dive into Vulnerabilities
SOC 101
More White Papers
Reports
The New Face of IT Automation
State of Cybersecurity Incident Response
More Reports

I'm really happy that such application are being develop and it is helping government catch such individuals.  I was looking to some of the apps.  They have a wide variety for different purposes.  They have a lot of apps relating to health and financial information.  Two very important issues affecting our society.  I wonder whether state or local governments will try to develop their own apps.
Reply  |  Post Message  |  Messages List  |  Start a Board
Editors' Choice
Hot Topics

More Informa Tech Live Events
Now That Ransomware Has Gone Nuclear, How Can You Avoid Becoming the Next Victim?Securing Active Directory the Way it Deserves5 Ways to Jumpstart AI