Government and public sector enterprises turned on 5% more iPads between April and June, despite recording only a 1% increase overall in mobile device activations, according to Good Technology.

"We continue to see Android climb, but government is focused on iOS," said Chris Roberts, VP of public sector at Good Technology.

Good's quarterly Mobility Index Report is not a survey but a statistical abstract of activity from customers of its enterprise platform for managing mobile devices and apps. The report doesn't cover BlackBerry devices, which have their own management platform, or Windows tablets, which are managed more like laptops. Windows Phone activations show up in the report, but at just 1% of total device activations. The index covers all industries, but the result for public sector customers was one of the standouts, Roberts said.

"Much like e-government seemed revolutionary, now we're moving to mobile government -- the last mile," Roberts said. Federal agencies have "moved farther and faster with mobility," partly on the strength of more consistent guidelines for how mobile devices should be deployed, compared with state and local government, he said. 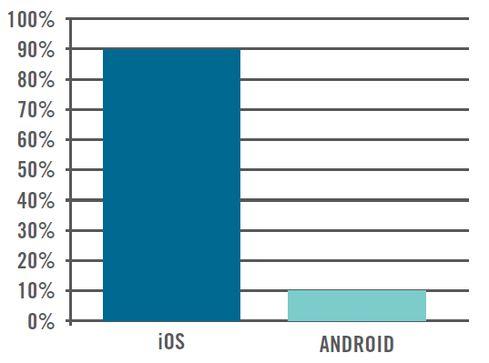 The iPad numbers reflect an increased interest in using tablets for government functions. Android tablets still suffer from a long-term perception that they are less secure, although that may start to change as more organizations "are moving forward and not suffering the catastrophic results everyone predicted," he said. Over time, attention should start to shift to "the specs of the device, as opposed to the logo on it," he said.

David F. Carr oversees InformationWeek's coverage of government and healthcare IT. He previously led coverage of social business and education technologies and continues to contribute in those areas. He is the editor of Social Collaboration for Dummies (Wiley, Oct. 2013) and ... View Full Bio
We welcome your comments on this topic on our social media channels, or [contact us directly] with questions about the site.
Comment  |
Email This  |
Print  |
RSS
More Insights
Webcasts
Unifying Your Endpoint Security Strategy
Fact or Fiction? The Truth About Cloud Native Security
More Webcasts
White Papers
Incident Readiness and Building Response Playbook
The 7 Step Guide to Third Party Risk Management
More White Papers
Reports
Defending Against Critical Threats
Future Proofing Your Network for 5G
More Reports