Google Fiber Could Be Headed To Chicago, Los Angeles - InformationWeek

Google continues the ambitious expansion of its high-speed Internet service -- Google Fiber -- by inviting Chicago and Los Angeles to apply.

Residents of both the City of Angels and the Windy City -- America's second and third largest urban centers -- could soon have a new high-speed Internet option in the form of Google Fiber, which so far has been limited to smaller metropolises.

Home to a combined 6 million people, Chicago and LA are the two largest metro areas Google has engaged with to date.

On Dec. 8, the company sent an invitation to the cities' representatives to explore bringing Google Fiber to their cities.

In addition to that roster of current and upcoming Fiber cities, Google has also sent out invitations to nine other urban centers, including San Diego and Portland on the West Coast, and Jacksonville and Tampa, Fla., on the East Coast. 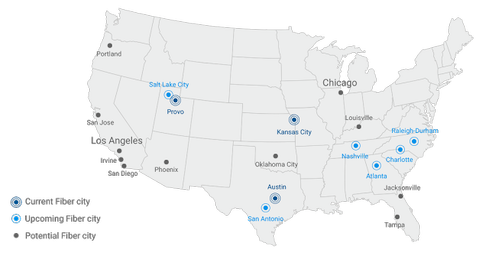 As with the previously announced cities, Google's invitation does not mean LA and Chicago are guaranteed to get the service. The next step is to begin a joint planning process with city leaders.

"As we kick off our usual checklist process, we'll work closely with city leaders to collect detailed information about each metro area. From Venice Beach to Wrigley Field, we'll study the different factors that would affect construction -- like city infrastructure and topography -- and use that information to help us prepare to build a local fiber network," Jill Szuchmacher, director of Google Fiber expansion, wrote in a blog post.

Szuchmacher noted that in Chicago, fiber Internet could help bolster the city's startup scene by fueling incubators like 1871, venture capital funds such as Chicago Ventures, and hundreds of small businesses. She also wrote that Fiber could benefit YouTube stars and indie musicians in the country's entertainment capital.

"Whether it's filmmaking or entrepreneurship or more abundant bandwidth at home, Chicago and L.A. are the perfect cities to show us what's possible with gigabit Internet," she wrote.

Google's Fiber focus isn't limited to cities and high-tech startups, however. In July, Google announced a program in all of its Fiber markets to connect residents in select public and affordable housing properties, free, with no installation fee.

On a global scale, Google is leaving terra firma and taking to the skies to provide wireless Internet to emerging markets through Project Loon, a science fiction-esque endeavor centered on giant floating balloons that function like WiFi hotspots in flight.

As part of this effort, the company announced that Indonesia's top three mobile network operators, Indosat, Telkomsel, and XL Axiata, have agreed to begin testing Project Loon's balloon-powered Internet capabilities over Indonesia in 2016.

Nathan Eddy is a freelance writer for InformationWeek. He has written for Popular Mechanics, Sales & Marketing Management Magazine, FierceMarkets, and CRN, among others. In 2012 he made his first documentary film, The Absent Column. He currently lives in Berlin. View Full Bio
We welcome your comments on this topic on our social media channels, or [contact us directly] with questions about the site.
Comment  |
Email This  |
Print  |
RSS
More Insights
Webcasts
Making XDR Work in Your Enterprise - May 12
How the Rapid Shift to Remote Work Impacted IT Complexity and Post-Pandemic Security Priorities
More Webcasts
White Papers
Annual Cybercrime Report - Cybersecurity Ventures
Sunburst: Impact and Timeline
More White Papers
Reports
Are We Cyber-Resilient? The Key Question Every Organization Must Answer
Key Strategies for Managing New Risks in Cybersecurity
More Reports