The letter, signed by Google, Apple, and a number of tech companies and security organizations, is urging Obama to halt legislation that would allow government to access personal data stored on mobile devices.

The letter was signed by more than 140 tech companies, security experts, and civil society groups and organized by the New America Foundation's Open Technology Institute.

"We urge you to reject any proposal that U.S. companies deliberately weaken the security of their products," the letter, which was officially released May 19, states. "We request that the White House instead focus on developing policies that will promote rather than undermine the wide adoption of strong encryption technology. Such policies will in turn help to promote and protect cybersecurity, economic growth, and human rights, both here and abroad."

Among the other signatories are three of the five members of an Obama-appointed review group the president formed in 2013 to re-assess technology policies following NSA contractor Edward Snowden's controversial data leaks.

The letter implores Obama not to undermine efforts to create encryption standards or to weaken or subvert commercial software. It argues that, in addition to undermining cyber-security, any kind of vulnerability mandate would also seriously undermine our economic security.

The letter also pointed out that US companies are already struggling to maintain international trust in the wake of revelations about the NSA's surveillance programs. 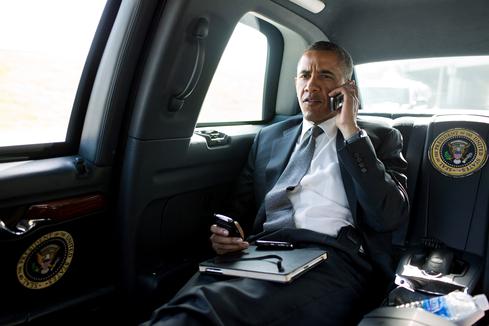 Mr. President, who's listening in on your calls?

"Since last fall, the president has been letting his top law enforcement officials criticize companies for making their devices more secure and letting them suggest that Congress should pass pro-backdoor legislation," Kevin Bankston, policy director of the Open Technology Institute, told the Washington Post.

"It's time for Obama to put an end to these dangerous suggestions that we should deliberately weaken the cybersecurity of Americans' products and services," he added. "It's time for America to lead the world toward a more secure future rather than a digital ecosystem riddled with vulnerabilities of our own making."

The letter follows the introduction of the End Warrantless Surveillance of Americans Act (H.R. 2233) bill earlier this month, which would create significant new privacy protections and enhance Internet security by closing legal backdoors into Americans' private data and by prohibiting technical backdoors into personal devices and communications.

"We need to shut the surveillance backdoor, not only to protect our privacy but to rebuild the consumer trust that is necessary for our tech industry to succeed globally -- trust that has been seriously eroded in the two years since the NSA's mass surveillance programs were revealed," Bankston said in a statement released by New America's Open Technology Institute.

Apple has already taken the lead in encryption standards by baking improved iPhone encryption into the iOS 8 operating system. This step drew the ire of law enforcement agencies.

However, it appears widespread support for encryption, including from cloud providers, mobile device manufacturers, private citizens, and a bipartisan Congressional committee, is behind protecting user information.

Nathan Eddy is a freelance writer for InformationWeek. He has written for Popular Mechanics, Sales & Marketing Management Magazine, FierceMarkets, and CRN, among others. In 2012 he made his first documentary film, The Absent Column. He currently lives in Berlin. View Full Bio
We welcome your comments on this topic on our social media channels, or [contact us directly] with questions about the site.
Comment  |
Email This  |
Print  |
RSS
More Insights
Webcasts
What We Can Learn from Sports Analytics
Making Cybersecurity Work in Small and Medium-Sized Businesses
More Webcasts
White Papers
The State of Threat Detection and Response
Managing OTT Content Distribution in the Connected World
More White Papers
Reports
How IT Security Organizations are Attacking the Cybersecurity Problem
2020 State of DevOps Report
More Reports

It will be interesting to see how all of this plays out.  Especialy with the Freedom Act specifically allowing some types of collection like this.  As for protecting data, cryptography is only as good as its weakest link: typically implementations and key storage.  Can we actually trust a lot of clouds to get it right?  I'm not so sure...
Reply  |  Post Message  |  Messages List  |  Start a Board
Editors' Choice
Hot Topics