BlackBerry becomes the only vendor to receive the full operational authority, which marks the completion of its security certification process with the DOD. This means testing has been completed and government employees can begin securely using BlackBerry 10 smartphones connected with BlackBerry Enterprise Service 10 to access email, data, and apps on defense networks.

BlackBerry 10 comes with a feature called BlackBerry Balance. It safeguards and separates work data from personal data, and allows users to switch between work and personal profiles. BlackBerry 10 smartphones are the first DOD-approved devices with such a capability, the company said.

"BlackBerry worked side-by-side with DISA to help certify the BlackBerry 10 solution, offering the US government an end-to-end mobile infrastructure that does not compromise on security and provides the most productive and collaborative mobile experience," John Sims, BlackBerry's president of global enterprise services, said in a statement released Thursday.

The announcement  came a day after BlackBerry's Secure Work Space for iOS and Android received Federal Information Processing Standard 140-2 certification. The validation is issued by the National Institute of Standards and Technology (NIST) to certify products that collect, store, and transfer sensitive government information. BlackBerry products are protected by AES 256-bit encryption, a highly secure data protection standard, according to the company. 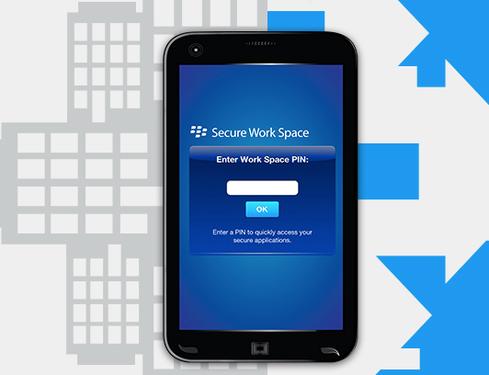 Secure Work Space allows users with Apple iOS or Google Android devices to access their email, calendar, notes, tasks, and contacts via a secured application. For instance, it doesn't permit users to copy and paste corporate data into personal apps. Secure Work Space is managed through Enterprise Service 10, a mobile device management console. Administrators have the ability to configure, secure, wipe, and interact with data in the Secure Work Space on a device.

Last May, the DOD approved the use of BlackBerry Z10, Q10, and PlayBook on its networks. Both the Z10 and Q10 run the BlackBerry 10 operating system. Samsung's Galaxy smartphones and tablets joined the list of authorized devices that could be used by government workers and military officials. Later that month, Apple also got the green light from the DOD for its iOS 6-based devices.

Now with full operational capability, BlackBerry entered the final step in the DOD's security certification process, signifying that the BlackBerry 10 platform -- both smartphones and BlackBerry Enterprise Service 10 -- can be activated within the DOD security infrastructure, said a BlackBerry spokesperson. It builds on BlackBerry's authority-to-operate certification received in August 2013.

Elena Malykhina began her career at The Wall Street Journal, and her writing has appeared in various news media outlets, including Scientific American, Newsday, and the Associated Press. For several years, she was the online editor at Brandweek and later Adweek, where she ... View Full Bio
We welcome your comments on this topic on our social media channels, or [contact us directly] with questions about the site.
Comment  |
Email This  |
Print  |
RSS
More Insights
Webcasts
Key technology trends in 2021 - Making these technologies work for your business
Detecting and Preventing Insider Data Leaks
More Webcasts
White Papers
Why Add Security to Your Skill Set and How to Do It
Protection Strategies for a Cyber-Resilient Organization
More White Papers
Reports
Accelerate Threat Resolutions with DNS
Are We Cyber-Resilient? The Key Question Every Organization Must Answer
More Reports

More Informa Tech Live Events
Detecting and Preventing Insider Data LeaksOptimizing App Performance in the Cloud Cybersecurity's Next Wave: What You Should Know