Given the recent hacks of US Assistant Secretary of State Victoria Nuland, posted on YouTube; reports from the Sochi Olympics of mobile device security breaches; and continuing revelations about the NSA's collection of phone data, attendees seemed more interested than usual in products promising better security.

On the security and privacy front, two companies -- one a large multinational and the other a startup --  announced two radically different products and approaches toward the sticky problem of mobile security, data loss prevention, and hacking. Boeing announced a secure phone called Black, while a joint venture of Maryland-based Silent Circle and Geeksphone (SGP Technologies) of Spain announced the Blackphone. Although the names suggest the same type of product, Boeing is targeting government customers while Silent Circle is aiming for those who would prefer to stay out of government's reach, as well as those in regulated industries.

Besides security news, there was a buzz among attendees wondering which global IT industry heavyweight would make the next big, bold move at mobile consolidation. Once on the periphery of enterprise computing, mobility is now central to most government and large corporate enterprise IT strategies. It's a forgone conclusion that to compete in the hyper-competitive global computing space, companies must have a credible mobile strategy.

Good Technology signaled it's not sitting still, with an announcement that it plans to acquire Maryland-based BoxTone; and Samsung surprised many by announcing its own cloud-based mobile device management software called Knox Enterprise Mobility Management. 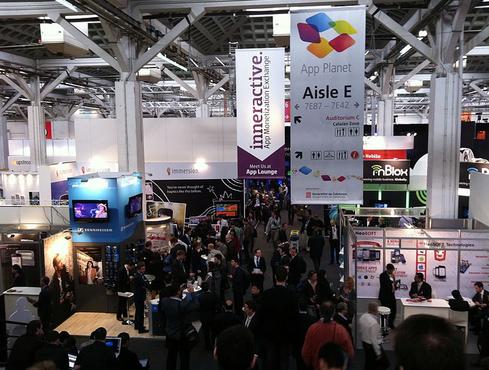 BoxTone's automated enterprise mobility management platform has long been regarded as best-of-breed in monitoring, auditing, and optimizing mobile and network performance. The acquisition wasn't a total surprise: BoxTone and Good worked together on a landmark MDM/MAS award issued last year by the Defense Information Systems Agency. Although BoxTone's management is well respected, especially in government, questions have persisted about the company's ability to finance future growth plans.

Good Technology, which Gartner placed as a leader in its Magic Quadrant for the MDM market, is poised go public, setting off speculation about how Good Technology might respond to VMware's recent acquisition of Air Watch for $1.54 billion. Good Technology is suing Air Watch over alleged infringements of its IP for mail synchronization. Air Watch, founded by Alan Dabbiere, has grown quickly in the MDM market by undercutting competitors on price.

In related MDM news, Samsung made a spate of announcements including the introduction of Knox Enterprise Mobility Management, a cloud-based MDM for small to midsized businesses. The news surprised MDM players that are currently part of the Samsung Enterprise Alliance Program and that see Samsung beginning to compete with established partners -- many of whom aided Samsung in gaining enterprise acceptance. Although Samsung remains the 800-pound gorilla in enterprise mobility, it's clear manufacturers including LG, Kyocera, HTC, Microsoft, and BlackBerry are not going to sit on their hands while the company makes its moves.

Samsung, to its credit, is offering one of the first real and viable alternatives to BlackBerry with its Knox platform. The question remains: Will an enterprise or government agency bet the farm on a single OEM vendor the way it did with BlackBerry in the past? It's not likely in this age of BYOD, especially given Apple's continuing penetration into enterprise operations.

Nevertheless, Samsung has thrown its considerable resources and clout into its mobile business, hiring industry veterans from BlackBerry, and beefing up its sales and marketing efforts. It promises to be the OEM to watch in government.

Randy Siegel is the Founder of Center Circle Consultants, which focuses on US government mobility. He's also a Principal in Acommence Advisors, a mobile advisory company. He spent more than a decade with Microsoft Corp. where he oversaw Microsoft's mobility strategy and ... View Full Bio
We welcome your comments on this topic on our social media channels, or [contact us directly] with questions about the site.
Comment  |
Email This  |
Print  |
RSS
More Insights
Webcasts
The Failures of Static DLP and How to Protect Against Tomorrow's Email Breaches
Strategies for Success with Digital Transformation
More Webcasts
White Papers
How to Prioritize Risk Across the Cyberattack Surface
All In, Online Gaming & Gambling
More White Papers
Reports
The State of Threat Detection and Response
Are Unprotected Cloud Databases Leaking Your Data?
More Reports

Interesting to note how relatively quickly MDM emerged as a big issue and now is already going through a consolidation wave in the federal space; and how companies still believe there's a market for super secure phones -- a testament to the lack of cofidence in existing gear.

Valuable context on Good Technology and AirWatch, thanks for sharing. Readers, is VMware's AirWatch buy on your radar screen? Has it changed your MDM thinking at all?
Reply  |  Post Message  |  Messages List  |  Start a Board
Editors' Choice
Hot Topics

10 IT Trends to Watch for in 2021 Cynthia Harvey, Freelance Journalist, InformationWeek,  12/22/2020
White Papers
How to Prioritize Risk Across the Cyberattack Surface
Two-Factor Evaluation Guide
From MFA to Zero Trust
Presenting Your Cloud Security Strategy to the Board
The State of Threat Detection and Response