With 60% of the world offline, the World Bank calls for changes to support the promise of the digital revolution.

The Internet and related digital technologies amplify economic growth, opportunity, and efficiency, according to a report released on Thursday by the World Bank. Yet the digital dividends arising from technological advancement -- growth, jobs, and services -- remain unevenly distributed.

Around the globe, according to World Bank figures, there are 6 billion people without access to broadband, 4 billion without access to the Internet, and 2 billion without mobile phones. As World Bank Group president Jim Yong sees it, traditional social and political challenges prevent the benefits of technologically driven prosperity from reaching the poor and disadvantaged.

"[T]he full benefits of the information and communications transformation will not be realized unless countries continue to improve their business climate, invest in people's education and health, and promote good governance," Yong wrote in the report.

The report frames ostensible efforts to expand Internet access, like Facebook's Internet.org, in a broader context. As Catherine A. Novelli, Under Secretary for Economic Growth, Energy, and the Environment at the State Department, put it in a statement, Internet access is necessary, but it isn't enough. "To fully realize the economic and social benefits from the digital dividend requires a technology environment that fosters competition among businesses, adapts workers' skills to the demands of the new economy, and ensures that institutions are accountable," she said. 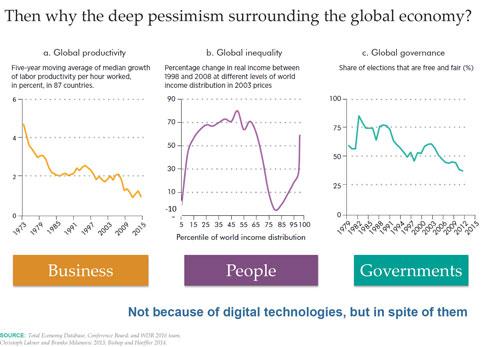 Improving global prosperity, the report asserts, requires analog complements to digital advances, including regulations that foster connection and competition, skills to use technology, and institutions that respond to the needs and demands of citizens. For example, in Afghanistan and Niger, where 7 in 10 adults cannot read, literacy must precede connectivity.

The digital transformation that has been reshaping commerce, social interaction, and governance since the Internet became a mass market medium in the 1990s ought to have changed the world for the better. For many, it has. But it hasn't been enough to offset deeper problems. These include the declining rate of productivity growth around the globe, rising income inequality, and a decline in the percentage of free and fair elections around the world.

"Firms are more connected than ever before, but global productivity growth has slowed," the report says.

It attributes the dissonance between technological advancement and economic retreat to several factors, including the fact that 60% of the world's people remain offline and unable to participate in the digital economy; the polarization of labor markets, because technology amplifies opportunities for the highly educated while it works against the less educated by making low-skill jobs scarce through automation and competition; and the winner-take-all tendency in the digital economy, which empowers elites, to the detriment of governance and institutional accountability.

Noting that the economics of the Internet favor natural monopolies, the report cites two U.S. companies as examples. "Google, which captures almost one-third of global digital advertising revenue, has been investigated for preferential placement of its own products, exploiting third-party content, and exclusionary practices in its placement of advertising," the report says. "Amazon, the largest sales platform for book publishers, has used its market power to enforce its pricing policies."

The report stops short of condemning such concentrations of power, allowing that there may be other market benefits. But the implication is that instead of "winner-take-all," we'd all be better served by "winner-take-less."

The World Bank report also notes that Internet filtering and censorship, which have become increasingly common, impose economic and welfare costs, and threaten the Internet as an engine of growth.

The World Bank's recommendations to ensure that the digital revolution reaches everyone are simple: regulations that promote investment and innovation; educational opportunities that allow people to participate; and institutions that address citizens' concerns and requirements. But implementing these recommendations, even if the powers that be are so inclined, will not be simple.

Thomas Claburn has been writing about business and technology since 1996, for publications such as New Architect, PC Computing, InformationWeek, Salon, Wired, and Ziff Davis Smart Business. Before that, he worked in film and television, having earned a not particularly useful ... View Full Bio
We welcome your comments on this topic on our social media channels, or [contact us directly] with questions about the site.
Comment  |
Email This  |
Print  |
RSS
More Insights
Webcasts
Zero Trust for a Work-From Home World
Hybrid Cloud: The Great Balancing Act
More Webcasts
White Papers
Insider Risk Management: A Better Way to Prevent Data Leaks
Aligning Cyber Skills to the MITRE ATT&CK Framework
More White Papers
Reports
Protection Strategies for a Cyber-Resilient Organization
2021 Top Enterprise IT Trends - Network Computing
More Reports
Copyright © 2021 UBM Electronics, A UBM company, All rights reserved. Privacy Policy | Terms of Service