Where Do Higher Education CIOs Come From? - InformationWeek

Higher ed technology leaders are still most commonly hired from within academia. Take a look at some interesting demographics.

Tablets Rock On: Education Tech Through The Ages
(click image for larger view and for slideshow)
How many higher education CIOs are homegrown, as opposed to imports from other industries?

In career-path discussions, there has been a lot of noisy debate about whether candidates are being groomed from within higher education, or whether hiring committees are tapping outside industries in search of fresh candidates. If they are imported, what industries are supplying these migrating CIOs? Are they different from the CIOs who have cultivated entire careers within higher education? Is there a gender advantage? It's worth tackling this migration question, and separating fact from fiction and future from past.

[ A disruption you should be part of? Read MOOCs: What University CIOs Really Think. ]

The study found that of the responding CIOs, a solid 74% had worked in higher education in their last position. Healthcare, nonprofit, public or commercial sectors supplied the remaining 26%, and of these four industries, the commercial sector dominated at 18%.

Just 8% of CIOs came to higher education from the nonprofit, public and healthcare sectors. Setting aside these three sectors, let's look at the dominating commercial sector only.

The results reveal differences between those IT executives who have worked in higher education and those who moved to the senior role from the commercial sector. Time served in the different sectors is one difference, and it chronicles the CIO migration.

Higher ed tech leaders often discuss how there is a current influx of CIOs entering academe from industry -- but the study does not show any dramatic surge. On average, the CIOs have logged more than 15 years working in higher education IT, a fairly consistent finding since 2007. In contrast, CIOs averaged only six years in technology outside higher education. These numbers support the idea that any migration from industry to higher education likely occurred more than a decade ago. 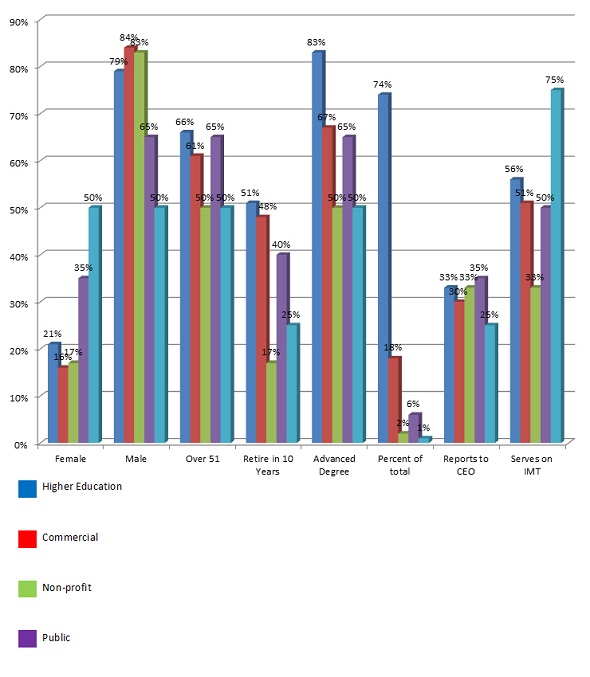 Demographics offered some more insight. The greatest difference was education. It's clearly important in higher education. In fact, 95% of the institution management team -- other VPs and presidents -- believe a higher ed CIO should have an advanced degree. It should come as no surprise that 83% of the higher ed CIOs had an advanced degree compared to 67% from the commercial sector.