Volkswagen AG CEO Martin Winterkorn on Sunday issued an apology in response to allegations from the US Environmental Protection Agency and the California Air Resources Board that VW and two of its subsidiaries had used software to cheat on vehicle emissions tests.

"I personally am deeply sorry that we have broken the trust of our customers and the public," said Winterkorn in a statement. "We will cooperate fully with the responsible agencies, with transparency and urgency, to clearly, openly, and completely establish all of the facts of this case. Volkswagen has ordered an external investigation of this matter."

On Sept. 18, the EPA issued a Notice of Violation accusing Volkswagen AG, Audi AG, and Volkswagen Group of America of deliberately employing a "defeat device" to allow four-cylinder Volkswagen and Audi diesel cars from model years 2009-2015 to appear to meet emissions standards during testing.

During actual use, however, the affected vehicles emitted 10 to 40 times more pollutants than allowed, according to the EPA. 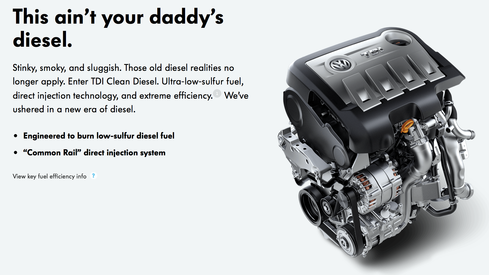 As trading resumed on Monday, Sept. 21, stock of Volkswagen AG was down about 20% in the wake of the EPA/CARB charges. For Clean Air Act violations, VW could be fined up to $37,500 per vehicle, which would amount to $18 billion for 482,000 affected vehicles. There may be additional litigation.

The EPA has not said how much it will seek in fines, but a similar case in 1998 may offer some guidance.

In 2015 dollars, that fine would be about $122 million, based on a cumulative inflation rate of 46.2%. That's significantly less than the statutory maximum.

The EPA and Justice Department claimed that the truck makers sold 1.3 million vehicles with defeat devices that disabled emission controls while on the road. The EPA estimated that the vehicle makers would spend an additional $850 million to develop cleaner diesel engines and bring old engines into compliance.

Beyond direct financial fallout, Volkswagen will have to contend with brand damage. For example, Consumer Reports on Sunday suspended its recommendation of two Volkswagen models, the Jetta diesel and the Passat diesel. The publication will wait until VW fixes the emissions system to re-test the cars.

Thomas Claburn has been writing about business and technology since 1996, for publications such as New Architect, PC Computing, InformationWeek, Salon, Wired, and Ziff Davis Smart Business. Before that, he worked in film and television, having earned a not particularly useful ... View Full Bio
We welcome your comments on this topic on our social media channels, or [contact us directly] with questions about the site.
Comment  |
Email This  |
Print  |
RSS
More Insights
Webcasts
Building the SOC of the Future: Next-Generation Security Operations
ROI and Beyond for the Cloud
More Webcasts
White Papers
5 Steps to Zero Trust in the Data Center
From MFA to Zero Trust
More White Papers
Reports
Special Report: Edge Computing: An IT Platform for the New Enterprise
Special Report: Understanding Your Cyber Attackers
More Reports

The Kia and Hyundai cheats are also due to not prescribing and verifying the test conditions under which these measures were taken. Such tests should be conducted by a third party like UL or TÜV.

As far as individual or culture, it is the culture. I am convinced that there were plenty of minions who spoke up and claimed it was wrong, but had the choice of going along with it or losing their job, if not even get sued for disclosing business secrets.

I am sure VW has a rough quarter now, but in the end it will nothing more than a larger blip on the balance sheet. Stock is already rebounding and financially VW has no worries, half of the company is owned by the German state Lower Saxony, so it would be taxpayers in the end who have to cover expenses.

The culture that favors cost cuttings and sales over everything, especially quality, will eventually generate such major fails. For the longest time I suggest that Ethics must be a mandatory course for any science, business, and engineering graduate. Maybe that helps to prevent things like this.
Reply  |  Post Message  |  Messages List  |  Start a Board

@Thomas: They would probably "refurbish" these cars (or claim to) and send them to Chinese or Indian markets.
Reply  |  Post Message  |  Messages List  |  Start a Board

Interestingly, Hyundai and Kia cheated in a smarter way than VW, though they were still caught. The two South Korean car makers manipulated tests for favorable results without resorting to software trickery.

From the EPA: "For example, Hyundai and Kia restricted their testing to a temperature range where its vehicles coasted farther and faster and prepared vehicle tires for optimized results. In processing test data, Hyundai and Kia chose favorable results rather than average results from a large number of tests. In certain cases, Hyundai and Kia relied predominantly on data gathered when test vehicles were aided by a tailwind."

So there's probably a lot of cheating that goes on. Some of it is just more obvious.
Reply  |  Post Message  |  Messages List  |  Start a Board

Yea, it's a wrong on so many levels!

And, whether Martin should resign or not, we should be seeing a lot more owership of the problem and intended action, not the start of an investigation.
Reply  |  Post Message  |  Messages List  |  Start a Board

Good point. I'll give VW credit that their apology is at least more straight-forward than most. But, I hope we see a lot more action into what they are actually going to do about it.

The 'investigation' part of it really makes me think they won't, though. What's to investigate? Sounds like the start of a 'shift the blame' strategy aready.
Reply  |  Post Message  |  Messages List  |  Start a Board

This is more than a simple wrong. More pollutants means more health issues for many. My asthma symptoms this year have been the worse that I have recently. Who couldn't say that this is directly linked to all the driving that stevew928 has been doing.
Martin Winterkorn should resigned, if he has any shame at all left.
Reply  |  Post Message  |  Messages List  |  Start a Board

Makes me wonder what else they cheated on? What about the other auto makers?
Reply  |  Post Message  |  Messages List  |  Start a Board

This was something that took a lot of work and planning. It wasn't just an oversight or mistake.

I don't see any good way of explaining it outside of.... "well, we thought we could get away with it... sorry" which doesn't instill much confidence.
Reply  |  Post Message  |  Messages List  |  Start a Board

The question is... why did they do it? Are they operating on the subjective-not-wrong-unless-you-get-caught morality that is becoming so prevalent these days? I guess so.

It's not like this is an oops moment. This took a LOT of planning and implementation. They clearly did it to thwart the policy, hoping they'd never get caught.

But, here's the problem. I bought one... a 2010 Jetta TDI. I love the car, and have been quite proud of it. I've hailed it as a pretty good 'green' alternative to hybrids and electric cars. So much for all of that, huh? I just got back from a trip through the the mountains of BC (Canada) where I averaged about 40 MPG (while also averaging over 80 MPH through much of it). It's simply a stellar car... but I guess stellar by cheating?

So, next time I take it in, are they going to 'fix' it with a software update that kills the performance I love about the car (that's why I bought it... I'd have bought other vehicles if fuel-economy were my only concern)?

Are they going to refund my purchase price if I'm no longer happy with it? (or, pay me the current/previous market value for it? Or allow a fair trade-in? etc.)

Will I ever trust them again and buy another VW? They've got a lot more than an oops on their hands here!
Reply  |  Post Message  |  Messages List  |  Start a Board

This a black eye for Volkswagen. How often do people talk themselves into doing what they think "has to be done," only to find how much cheaper and better in the long run if they had just concentrated on doing it right the first time. I don't think it's always one or two individual at fault. It's more the culture in which they operate, make promises, meet deadlines, etc., whether realistic or not.
Reply  |  Post Message  |  Messages List  |  Start a Board
Editors' Choice
Hot Topics

10 IT Trends to Watch for in 2021 Cynthia Harvey, Freelance Journalist, InformationWeek,  12/22/2020
White Papers
Centralized Security Policy Management Across Hybrid Cloud Environments Should be an Obvious Strategy
Eliminate East-West Traffic Hair-Pinning
What To Consider Before Renewing Your SD-WAN
Top Threats to Cloud Computing: The Egregious 11
From MFA to Zero Trust