The Transformation of Detroit's IT: From Win XP to EMail that Works - InformationWeek

Beth Niblock moved to Detroit as CIO to transform the crumbling, antiquated IT operation and infrastructure. Here's what her team has accomplished in 4 years with the limited resources available to a city in bankruptcy.

When Beth Niblock arrived in Detroit as part of a technology team brought in to help rescue the city, she faced a host of urgent and significant problems. The city didn't have working streetlights. The trash wasn't being picked up, and the city was in bankruptcy and being administered by an emergency manager.

She came onboard as CIO of the city in February 2014, and four years later the city's crumbling technology infrastructure is on the mend.  The city emerged from financial oversight on April 30, two days before Niblock shared the highlights of her effort and how she got it done during a keynote onstage interview with Code for America Founder and Executive Director Jennifer Pahlka at Interop ITX. 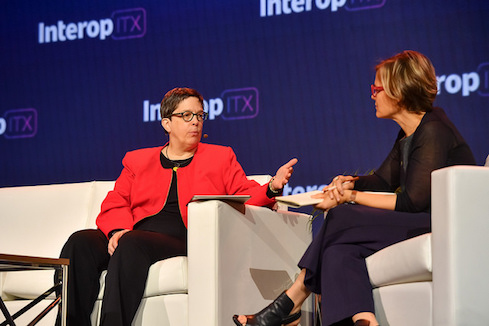 Niblock started out with about 60 team members in her IT organization, and more than half of them were contractors. Detroit's IT salaries weren't competitive -- network engineers with two decades of experience were making $50,000, for example, she said.

Niblock consolidated all of Detroit's IT operations, which had been divided among many different departments, so that she could increase that initial 60 headcount to 136. The mayor worked with her to speak up about the need make the job benefits more competitive. Niblock said she also worked to sell job candidates on the element of public duty that went with working for the city of Detroit.

There were plenty of other challenges, too. Niblock said that 85% to 90% of the city's computers were Windows XP or older. They couldn't be patched, and the network wasn't working. The mail wasn't being delivered. Detroit still used Novell NDS instead of Active Directory. (and they are still using GroupWise.)

Before Niblock started working on it, Detroit's government workers had trouble receiving their email. And if they did get the email, they couldn't open the attached document. Among the improvements Niblock's team made was to update the desktop software from Office 2003 to 2013. The project was among many where the city of Detroit upgraded legacy systems that Pahlka noted was long past its expiration date.

Another such legacy system that is still in place is the city's payroll system that was put into operation in 1978. One of the system's two administrators put off his retirement to keep the system up and running to make sure that the city's police still got paid. In the middle of the lift and shift process to update the system, that administrator died.

Over the four years that Niblock has served as CIO she has a long list of accomplishments. The team completely redid its network infrastructure; put backup systems in place; they shifted off the mainframe; they added computer-aided dispatch for 911; they put in new records systems for police, fire, and emergency management; they added vehicle and body cameras for police; they are replacing all the technology for the bus system; they are launching a new website in a couple months that will include the languages of Spanish, Arabic, and Bengali.

One of the big impact projects for citizens had to do with how they pay their tax bills. Twice a year, citizens would have to line up around the municipal buildings to pay those bills in person. Not many citizens in Detroit have broadband Internet, so online payment wasn't a big impact option for Detroit. So the city put machines in CVS drugstores throughout the city that would accept tax payments.

Code for American helped, too, by working on a system called Text My Bus that enabled citizens to text their location to Detroit's bus system and get a text back about when their bus was expected to arrive.

The improvements in Detroit have been huge and the work is ongoing. Niblock left Interop ITX attendees with this message: "My advice for anyone in this field is to consider coming to government for a bit," she said, adding that those who do a rotation of service in government will gain valuable experience, potentially in a number of different areas. Niblock said Detroit has 25 distinct businesses from animal control to the health department to police.

"Come, and you will get the experience of a lifetime."

Jessica Davis has spent a career covering the intersection of business and technology at titles including IDG's Infoworld, Ziff Davis Enterprise's eWeek and Channel Insider, and Penton Technology's MSPmentor. She's passionate about the practical use of business intelligence, ... View Full Bio
We welcome your comments on this topic on our social media channels, or [contact us directly] with questions about the site.
Comment  |
Email This  |
Print  |
RSS
More Insights
Webcasts
Securing and Monitoring Networks in the 'New Normal'
How Elite Analyst Teams are Transforming Security with Cyber Reconnaissance
More Webcasts
White Papers
2020 Threat Hunting Report
2020 Gartner Market Guide for Network Detection & Response
More White Papers
Reports
The State of Threat Detection and Response
DNS Network Traffic Volumes During the 2020 Pandemic
More Reports