The Texas student detained for bringing a homemade clock to his high school has won the support of technology and political leaders.

Technology industry executives and President Obama made it clear that they don't support the arrest of a Texas teen for tinkering, an activity they view as key to improving science, technology, engineering, and math (STEM) education.

On Monday, Ahmed Mohamed, a 14-year-old Muslim student at MacArthur High School in Irving, Texas, was detained for bringing a "suspicious-looking device" to school.

The suspicious-looking device turned out to be a science project: A handmade digital clock. According to local ABC affiliate WFAA, the Dallas chapter of the Council on American-Islamic Relations said Ahmed was arrested because of his religious and racial identity. 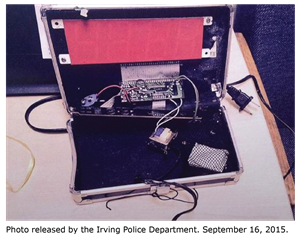 A letter sent out on Tuesday by Principal Dan Cummings acknowledged the arrest and, despite finding no cause for alarm, cautioned parents to review school policies. "We will always take necessary precautions to protect our students," wrote Cummings.

The clock did not, as school officials initially feared, explode. But social media did.

A press conference was held by the school district and the Irving Police Department to justify their actions. Afterward, President Barack Obama, via Twitter, invited the Texas student, since released, to Washington. "Cool clock, Ahmed," President Obama said in a tweet. "Want to bring it to the White House? We should inspire more kids like you to like science. It's what makes America great."

NASA added its voice, tweeting that it supports STEM education and kids like Ahmed.

Mark Zuckerberg, CEO of Facebook, the world's largest social media network, condemned the arrest. "Having the skill and ambition to build something cool should lead to applause, not arrest," he wrote in a Facebook post. "The future belongs to people like Ahmed."

Zuckerberg added that if Mohamed ever wants to stop by Facebook, he'd be happy to meet.

Box CEO Aaron Levie chimed in with an invitation to visit his company. And many others, like Anil Dash, an early supporter of Ahmed's cause, voiced similar expressions of support.

Hillary Clinton, Democratic candidate for president, in a tweet said, "Assumptions and fear don't keep us safe -- they hold us back. Ahmed, stay curious and keep building."

The Irving Independent School District acknowledged the arrest on its website but offered few details, citing privacy laws. On Wednesday, the district said it felt media reports were unfair. The district said it will provide further information to the media if the family consents.

Thomas Claburn has been writing about business and technology since 1996, for publications such as New Architect, PC Computing, InformationWeek, Salon, Wired, and Ziff Davis Smart Business. Before that, he worked in film and television, having earned a not particularly useful ... View Full Bio
We welcome your comments on this topic on our social media channels, or [contact us directly] with questions about the site.
Comment  |
Email This  |
Print  |
RSS
More Insights
Webcasts
Take DevOps to the Next Level
How the Rapid Shift to Remote Work Impacted IT Complexity and Post-Pandemic Security Priorities
More Webcasts
White Papers
2020 SANS Enterprise Cloud Incident Response Survey
The Top 5 Mistakes Everyone is Making in Vulnerability Remediation
More White Papers
Reports
Are We Cyber-Resilient? The Key Question Every Organization Must Answer
Building the SOC of the Future
More Reports


I completely understand that as Americans are on edge because of the events of the past but profiling a student without just cause and accusing them of a malicious act with no evidence is unconscionable. At the very least tis student deserves an apology from the entire district. If we encourage this type of behavior we will frighten any student from trying anything. We are already creating such limited boxes for our students that make creativity difficult. Issues such as this only exacerbate the educational challenges we face.

Ariella, that's a great capture of the Steve Wozniak story about being sent to detention for putting an electronic metronone in a friend's locker. If nothing else, we should thank Ahmed for eliciting a bit of Silicon Valley hstory that may not have been told before. I would ask whether any of the adults at the Irving School responsible for the suspension or handcuffing actually knew the 14-year-old. The first reality check might have been: Is this child more likely to bring a gadget or a bomb to school? Clearly, if Ahmed can get past the Secret Service and into the White House, it might have been the former.
Reply  |  Post Message  |  Messages List  |  Start a Board

The story about the kid arrested for making a clock takes me back to high school in 1967. I built an electronic metronome and placed it in a friend's locker, along with a tin-foil switch to speed up the ticking when the locker was opened. I couldn't hold my laughter when Principal Bryld told me how he extracted the 'bomb', ran out to the football field (from the C building), and dismantled it. I wound up spending a night in 'juvie'. I did teach other inmates there how they could remove the electric wires from an overhead fan and attach them to the metal bars no shock the guards.
[I think he meant "to" rather than "no shock the guard.:] In the comments, he notes, "I'd suggest that slight misbehavior is an essential ingredient of creative thinking."
Reply  |  Post Message  |  Messages List  |  Start a Board
Editors' Choice
Hot Topics