The President's proposed cuts in IT spending in fiscal year 2015 reflect successful consolidation of services, but experts say that flat funding can't go on forever.

While analysts await more details behind President Obama's 3% cut in proposed IT spending for fiscal year 2015, former federal IT leaders say the cuts make sense in that they reflect stronger linkages to the programs they are designed to support. Some, though, worry about the long-term funding trends.

Under the budget request, IT spending would drop to $79 billion in the next fiscal year from the current level of $81.4 billion, a decline of 2.9%. Office of Management and Budget officials say the decrease mirrors savings from measures to consolidate IT and eliminate duplication. They point to more than $1.6 billion saved through PortfolioStat, a tool introduced by OMB in 2012 to help agencies consolidate IT investments.

"It's easy to say CIOs should always have more money," says Mark Forman, who served as the first US administrator for e-government and IT and as unofficial federal CIO during the Bush administration. "The reality is that most of the [budget proposal] goes to the programs and if they're consolidating programs then there's going to be less money  spent on IT, and it looks like [OMB] made the numbers match on that," in the budget request.

The correlation between program and IT spending cuts indicates that "OMB has a solid governance model that reflects leading practices in IT capital planning and investment controls," Forman told InformationWeek Government.  It also reflects the impact of PortfolioStat, an investment review process, "as a tool to make budgetary and management decisions on many of these IT investments." This approach has helped OMB understand "where there are opportunities to invest and get productive improvement and where there are opportunities to take costs down," he said.

The 2015 IT budget also reflects a clearer understanding that consolidations in mission programs directly link to reductions in related IT spending. He pointed to consolidations in grant programs across several different agencies that resulted in concomitant IT reductions. 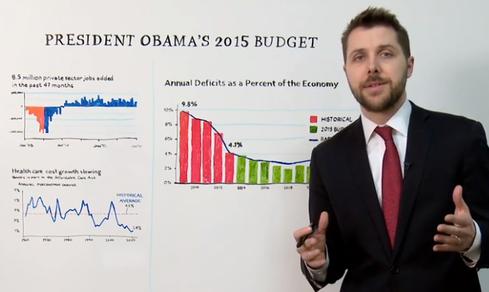 Brian Deese, deputy director of the Office of Management and Budget, sketches out the President's fiscal year 2015 budget priorities.

Karen Evans, who succeeded Forman as administrator for e-government and IT in 2003, agreed that the administration's proposed reduction in IT spending "makes sense," given the administration's ongoing priority of creating a government that is effective, efficient, and supportive of economic growth and the success of PortfolioStat in "incentivizing" agencies to achieve those efficiencies.

"It makes logical sense that the overall IT spend would be down, because they're gaining those efficiencies," said Evans, a partner with KE&T partners LLC, a management consulting firm. "You should achieve the savings because [the administration] is still focused on datacenter consolidation and cloud implementations. Those are [programs] that give you greater efficiency at the same cost if not lower cost."

"The numbers that they've released [for the IT budget request] demonstrate at a high level the success that they've already achieved," she added.

The drop in the administration's proposed IT spending for 2015 contrasts sharply with a continuous upward trajectory in spending prior to the Obama administration, which had been growing about 7% per year, OMB officials said.

While applauding the emphasis on consolidation and efficiency that has driven IT savings, other experts expressed a note of concern about a continuing, long-term downward trend in IT spending through consolidation.

"I'm for getting savings in IT. I think that part is good," said Van Hitch, senior advisor at Deloitte Consulting LLC and former Justice Department CIO. "I think they have to be careful that they don't short themselves in terms of the capabilities that they're going to be providing to the mission side of the house through IT… I think the only way IT can really incur the kind of downward slope in the budget is by a fair amount of consolidation, which I don't think is a bad thing but it's a very difficult thing to do."

Hitch cautioned that flat or declining IT budgets reached through consolidation could eventually be troublesome for agencies. "It will be a real challenge for CIOs and the federal IT community to keep getting those kinds of savings," he said. "PortfolioStat gives OMB hope that some savings are there. They have made some pretty significant claims for the savings they've gotten out of PortfolioStat. But without huge consolidations, there's going to be a point where people start squealing."

Evans agreed that it could become more difficult in future years for agency IT leaders to consolidate and find efficiencies, "because there's a certain amount of consolidation that can happen." This circumstance would make for "hard decisions" on the part of agency officials.

Richard W. Walker is a freelance writer based in the Washington, D.C., area who has been covering issues and trends in government technology for more than 15 years. View Full Bio
We welcome your comments on this topic on our social media channels, or [contact us directly] with questions about the site.
Comment  |
Email This  |
Print  |
RSS
More Insights
Webcasts
Building Asset Management into Your Enterprise Security Strategy
How the Rapid Shift to Remote Work Impacted IT Complexity and Post-Pandemic Security Priorities
More Webcasts
White Papers
5 Reasons to Protect your VPN with Multi-Factor Authentication
Addressing Complexity and Expertise in Application Security Testing
More White Papers
Reports
Key Strategies for Managing New Risks in Cybersecurity
The State of DevSecOps Report
More Reports

It's refreshing to see fiscal discipline in at least one government sector. Like every private sector CIO, agency CIOs must figure out how to shift their budget dollars from keep-the-lights-on work to more innovative initiatives. That's much easier said than done, of course, but it seems as if agencies are starting to move in the right direction.
Reply  |  Post Message  |  Messages List  |  Start a Board

The proposed FY15 Federal IT may appear to make sense. But former Air Force CIO, William Lord, makes a great point elsewhere on our site (Breaking The Cycle Of Legacy IT Investment ) that failing to modernize legacy systems harbors hidden costs down the road.  While PortfolioStat has helped align IT investments with agency programs, the question remains, how much attention are agencies paying to the projected costs of antiquated legacy systems?