10 Tech Tools To Engage Students
(click image for larger view and for slideshow)
When Ivan Pereda heads off to college in a few weeks, he will be take with him a LinkedIn profile many college graduates might envy, reflecting the kind of technology and design skills companies like Google and Apple covet.

Much of the credit goes to his involvement in Mouse Corps, a program for high school students developed by the technology-in-education program Mouse, which is best known for its Mouse Squad program that puts students to work in PC and network technical support programs in the schools. In New York City, the best and brightest of those students get a chance to graduate into Mouse Corps, which is "kind of the geeked-out Eagle Scouts" wing of the program, according to Marc Lesser, education director for Mouse.

Offered as an afterschool program, Mouse Corps puts students through six months of training on human-centered design, followed by another six months of work prototyping a product with the help of a mentor. Mouse Corps also helps students get internships and apprenticeships -- and for the past couple of years has concentrated on making sure interns will be exposed to more than "coffee and copies" duties wherever they are placed, Lesser said. "We want them exposed to the actual craft of the people doing the jobs."

That's how Pereda got an IT department internship at a major law firm, in addition to experience with Java programming and electrical and mechanical design. Now an incoming freshman in the engineering program at the University of Wisconsin, he has his tuition fully covered by a scholarship from the Posse Foundation and recently secured an additional $40,000 scholarship from the Bloomberg publishing and data services empire, which also offered him a two-year internship.

"If it wasn't for Mouse, I wouldn't be able to achieve my potential," Pereda said. "Mouse is engineering with, for lack of a better word, a happy face." While he had a keen interest in technology to begin with, it made a big difference to have someplace he could go every Tuesday after school where the students and the staff shared that enthusiasm. "It's a really intimate small group of students who share the same passion for technology and engineering -- and who have a desire to really do something with it." 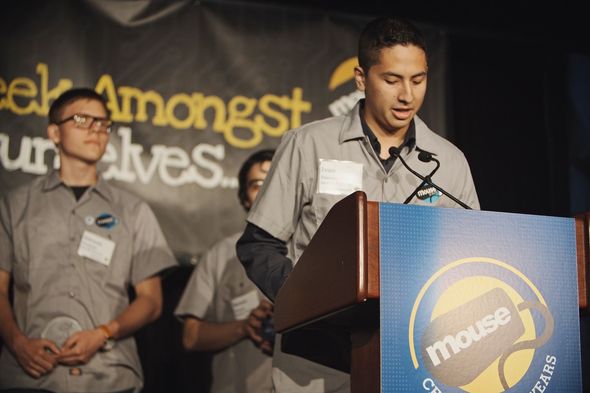 Mouse was founded 15 years ago in New York City by a group of Silicon Alley entrepreneurs who saw schools connecting to the Internet and buying PCs at a fast rate without necessarily having good plans for what to do with the technology. The idea behind Mouse Squad was to provide a first level of technical support, which all the schools needed, along with education for the students on how computers and networks function and how to fix them when they malfunction. Mouse is also targeted to underserved communities, defined as schools where about 70% of students are part of a free or reduced lunch program.

The Mouse Squad concept has since been replicated at affiliate organizations across the country. Mouse Corps, which is so far unique to New York City, is about five years old, Lesser said. Mouse is always looking to expand, but "we're pretty serious when it comes to filtering what a good affiliate looks like," Lesser said.

Mouse also breaks with the tradition of high school vocational education technical training for students who do not plan to continue their education beyond high school, Lesser said. "Most of our students are not that kind of students -- they're not going to take an A+ certification exam and go to work."

As a 7th grader, Pereda tested into the Baccalaureate School for Global Education, a New York City public school in the Astoria section of Queens, which was near his home. Although it has an academically rigorous curriculum, it is not particularly focused on science, technology, engineering and math disciplines -- in fact, after he enrolled it cut back on a STEM-focused Information Technology in a Global Society program he had planned to attend. But it did have a Mouse program, which was another reason he had wanted to attend the school, and Pereda became an active Mouse Squad volunteer. By the time he was in 9th grade, the school's Mouse Squad program was also scaled back and threatened with being discontinued. Pereda was one of the student advocates who fought to keep it alive.