NASA's belief that big ideas can come from small businesses has led the space agency to select 108 proposals from 99 small US firms that might support future missions and hold promise for commercialization.

The proposals span a variety of topic areas, including next-generation sensors, space communications and navigation, robotics, health monitoring for astronauts, in-space propulsion, and advanced telescope systems to enable a new class of observatories.

Five of the companies selected will focus on IT projects, such as technologies for large-scale numerical simulation. Accelogic LLC submitted a proposal to help NASA accelerate communication-intensive applications through data compression techniques. The Florida company provides accelerated field-programmable gate array numerical libraries, which are used to solve complex computational problems. The compression technology has potential uses in aerospace, weather forecasting, and climate research.

[What can NASA do with 3D printing for future missions? Take a look: NASA Explores 3D Printing: 5 Cool Projects]

Another company, Phoenix Integration, has proposed creating a "commercially viable" integrated visualization environment, which could be used for rapid evaluation of competing vehicle and mission concepts.

The list of proposals also includes a pitch for software architecture to addresses the challenges of multiple spacecraft operating in close proximity, as well as a way to combine satellite-sensing data with weather forecasts to improve rice production on Earth. 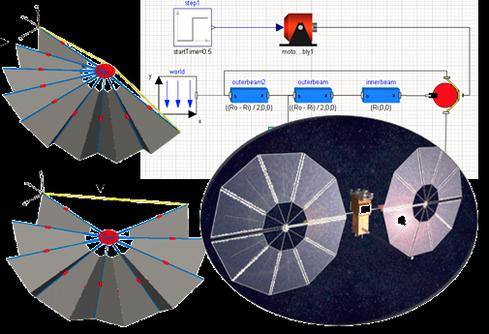 One of the 108 research and technology proposals selected by NASA, from ATA Engineering, provides a tool for designing a deployable solar
array system.

This marks the second phase of NASA's Small Business Innovation Research (SBIR) Program, designed for technology companies that want to participate in government-sponsored research and development efforts. The program consists of three phases. Phase I establishes the concept, Phase II focuses on development and delivery, and Phase III is the commercialization of the technology or service.

The selected projects -- from 99 companies in 26 states -- have a total value of approximately $87 million, according to NASA. The companies must now begin negotiations with NASA for contract awards.

"We see the benefits of small businesses and their SBIR-funded technology working for us every day, whether here on Earth in our air traffic control systems or on the surface of Mars and the technology behind NASA's Mars Curiosity rover," Michael Gazarik, NASA associate administrator for space technology, said in a press release. "Small businesses are bringing innovation to the marketplace while creating new products, new jobs, and strengthening our economy."

This year's proposals selected in Phase II expand on the results of recently completed Phase I projects, which were six-month contracts ranging from $125,000 to $225,000. In comparison, Phase II projects last approximately two years.

Elena Malykhina began her career at The Wall Street Journal, and her writing has appeared in various news media outlets, including Scientific American, Newsday, and the Associated Press. For several years, she was the online editor at Brandweek and later Adweek, where she ... View Full Bio
We welcome your comments on this topic on our social media channels, or [contact us directly] with questions about the site.
Comment  |
Email This  |
Print  |
RSS
More Insights
Webcasts
How Secure is Your Azure Cloud Security Environment?
Building & Managing the Next-Gen SOC
More Webcasts
White Papers
Securing IT & OT in Industrial Environments
Ransomware Response Report: Trends & Outlook
More White Papers
Reports
CyberSecurity Trends 2020
2020 SANS Cyber Threat Intelligence (CTI) Survey
More Reports

I think some administrations are going to suffer from image issues no matter what they do right.  On one hand a private company working with a government agency gives us a level of transparency we would not have otherwise.  On the other hand we have very sensitive data in the hands of a private company which many people are not comfortable with.  I haven't met anyone who thinks that government agencies are the most innovative groups out there but I don't meet many who want their personal data being spread around either.
Reply  |  Post Message  |  Messages List  |  Start a Board

Agreed -- it's smart when the CIA does it with In-Q-Tel and it's smart here. However, let's not hold our breath waiting for this administration to get a lick of credit for working smart in a public/private manner.
Reply  |  Post Message  |  Messages List  |  Start a Board

I really like this idea.  There are so many small companies or individuals who would love to be part of NASA but it's not like they can be bought up or absorbed by the administration.  When we have the likes of SpaceX out there with a totally different development mindset it is nice to see NASA taking advantage of the faster moving and more singularly focused companies around the aerospace industry.  Hopefully they can form long term relationships that will keep the innovation going.
Reply  |  Post Message  |  Messages List  |  Start a Board

Great exercise to welcome the innovative ideas from the people and thinking about implementing in the govt sectors.
Reply  |  Post Message  |  Messages List  |  Start a Board
Editors' Choice
Hot Topics