ICANN CEO: Why The Internet's Future Is At Risk - InformationWeek

ICANN CEO Fadi Chehade spoke with InformationWeek about how the Internet can continue without US government oversight.

ICANN, the Internet Corporation for Assigned Numbers and Names, hopes to convince the US government that it can oversee the Internet's technical infrastructure on its own.

The non-profit corporation has been doing so since 1998, but in conjunction with the US Commerce Department's National Telecommunications and Information Administration (NTIA). Under contract with ICANN, NTIA runs the Internet Assigned Numbers Authority (IANA), which coordinates changes to the Domain Name System's (DNS) root zone file and IP address allocation, among other things.

In theory, the US government, through IANA, could cripple portions of the Internet using only a keyboard to advance its interests or to achieve some political goal. Though it has not done so, the possibility has long vexed other countries.

As far back as 1998, the US government said it wanted to shift its Internet responsibilities to the private sector, but until recently, it hasn't been highly motivated to do so. Since 2013, international resentment arising from Edward Snowden's revelations about the scope of US surveillance has helped US officials recognize that change is necessary to keep everyone committed to a single Internet.

[ How will we connect tomorrow? Read 8 Smart Cities: A Peek At Our Connected Future. ]

In April 2014, NTIA announced its intention to shift its IANA responsibilities to the Internet's multistakeholder community. And the agency directed ICANN to come up with a proposal outlining how the transition will be carried out.

In effect, the US government no longer wants to be associated with the management of the Internet. At the same time, it wants to ensure that its withdrawal doesn't create instability. Simutaneously, the planned handover faces resistance from some lawmakers who believe the Internet should remain under US control. A week ago, Republican lawmakers sent a letter to the Government Accountability Office asking whether the transfer of IANA's functions should be subject to a Congressional vote.

ICANN has delivered part of its two-part proposal outlining how the organization will function in the absence of Uncle Sam. It's still working on the portion that lays out how ICANN will be accountable to the international community. The corporation has until September 2016 to complete its proposal. 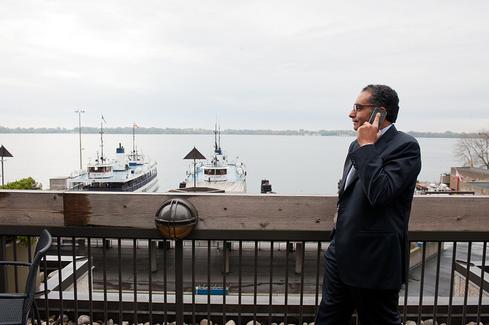 Last week, Fadi Chehadé, ICANN's CEO, visited Silicon Valley business leaders to remind them that they need to be involved in the transition. In a phone interview with InformationWeek, Chehadé said the purpose of his trip was "to make sure that business leaders in the Valley are crystal clear on the importance of the transition to keep the Internet logical infrastructure, which is the responsibility of ICANN, to keep that logical infrastructure for the world."

A Network Of Networks

The Internet's logical layer, or infrastructure layer, said Chehadé, is a network of networks.

"There are 70,000-odd of them -- mobile networks, satellite networks, fixed networks -- all the networks that make up the Internet," explained Chehadé. "But they are not obviously uniified. The networks are highly fragmented and distributed by design. Now, what makes all those networks become the one Internet is what we call the logical layer, the names, numbers, and protocols that make everything that is connected to those 70,000+ networks unique. And ICANN is responsible to coordinate that logical layer."

If the Internet's logical layer becomes fragmented, said Chehadé, if we end up with multiple separate Internets, that will have a huge impact on the flow of information and ideas.