Hillary Clinton explained how she sees technology fitting into the recovering US economy, at Nexenta OpenSDx conference. Here are nine things we learned.

Presumed presidential candidate and former Secretary of State and First Lady Hillary Clinton discussed her views on tech last week, speaking at the Nexenta OpenSDx conference in San Francisco. Addressing a crowd that included the CEOs of several major tech companies, she confessed to being a little out of her depth.

"I have to start by admitting I'm not an expert in software-defined storage. Or the intricacies of cloud computing," she said, drawing amused applause. "But I have learned enough to be tremendously excited about how the advances you are making are helping to build a 21st century American economy that is vibrant and dynamic, and if we make smart choices and investments, inclusive and broadly shared as well."

What could another Clinton administration mean for the tech industry and the nation at large? Here are nine things we learned from Hillary Clinton's appearance at OpenSDx. 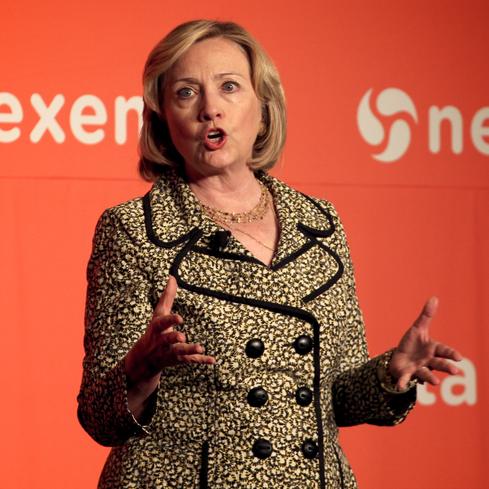 1. Clinton believes cloud computing, big data, and SDN are engines for US economic growth.
Clinton emphasized that tech has and will continue to play a key role in America's recovery from the Great Recession. "The power of the Internet wasn't just dot-coms," she said. "It was wonderful to see new companies creating jobs, but more important were the productivity gains that computing and the Internet brought to industries we wouldn't think of as being high-tech."

Clinton argued current tech trends such as cloud computing, big data analytics, and software-defined architectures will fuel future rounds of US growth. She briefly cited a range of ways in which new technologies will change traditionally non-tech fields, from farmers' use of weather data to stores that use real-time data to optimize retail and distribution operations. She also echoed a favorite talking point of her husband, former president Bill Clinton, describing tech's potential impact on healthcare alone as "staggering."

2. Clinton wants more public-private tech partnerships.
Clinton praised Silicon Valley's role in correcting the infamously botched healthcare.gov rollout. She said problems plagued the website because the government hasn't kept up with the pace of technology. "Let's face it, our government is woefully, woefully behind in all policies that affect the use of technology," she said, adding that when she became Secretary of State in 2009, the department wasn't equipped to support BlackBerrys for service officers.

Compared to the tech currently coming out of Silicon Valley, she pointed out, much of the government is one to two generations behind. "When people say, wow, look at the [healthcare.gov] rollout, that was not done right, well, [that was] in part because the rules, the procurement rules, the technology rules ... make it very difficult."

While Clinton allowed that other factors marred the website as well, she stressed that in the future, greater collaboration between businesses and the government could help avoid such debacles altogether. "Going forward, government could use more of your expertise on the front end," she told the crowd. "Designing and launching programs rather than coming afterward to help save them, embracing and launching a classically American public-private partnership -- it brings out the best of both worlds."

3. Clinton said privacy and security often conflict.
"[There is] no doubt we may have gone too far in a number of areas," Clinton said of post-9/11 intelligence efforts. Speaking directly to the NSA surveillance scandal, she said the agency "didn't so far as we know cross legal lines, but [it] came right up and sat on them."

"We have to rebalance," she added.

She cautioned, however, that "our privacy and our security are in a necessary, inevitable tension," a dynamic she said goes back to the beginning of our

Yeah, I thought she brushed that one off a bit too easily. Again, as David and I were discussing in this thread-- a talking point that distills a complicated issue into a deceptively confident statement. I thought it was kind of funny that she said "so far as 'we' know." As the former Secretary of State, I suspect she knows a few more details about this than "we" the public do.
Reply  |  Post Message  |  Messages List  |  Start a Board

>"Hillary can't control my careless tweets, let alone what a real political enemy will do with her words."

Indeed-- and that spins off into a whole different world of political aggravation. The presence of PR pros (whether Hillary's allies or enemies) who try to manipulate these talking points speaks to the vested interest some parties have in conditioning people to continue to rely on talking points-- hence our increasingly divisive culture, and the "echo chamber" ideology that's developed in both right-focused and left-focused media channels. This in turn speaks to the influence of money in the overall process-- who writes the talking points, what gets distilled, what gets excluded, who gets targeted with messaging and why, what transparency the public has into the process, and so on. On the flip side, I think the recent voting record shows that some constituencies have rebelled against politicians and donors who backed talking points that turned out to be lies. I'm not convinced this sort of populist discontent amounts to a corrective measure, but it reminds you that hollow talking points have a shelf life, and often end up canceling out one another.
Reply  |  Post Message  |  Messages List  |  Start a Board

>she said the agency "didn't so far as we know cross legal lines, but [it] came right up and sat on them."

Her interpretation of the Fourth Amendment appears to be pretty narrow then.
Reply  |  Post Message  |  Messages List  |  Start a Board

Well said. And Hillary can't control my careless tweets, let alone what a real political enemy will do with her words.
Reply  |  Post Message  |  Messages List  |  Start a Board

I think you just distilled one of the major challenges facing our democracy.

Our nation faces complex issues that demand a certain amount of meditation. But so much political discourse gets distilled to "talking points," many of them even more condensed than the 140 characters you get on Twitter. These talking points have virtues, but not they're often used to the exclusion of more comprehensive investigation. As you say, some people will read the tweets about this article, but not the article itself. That's not an indictment on people who choose not to read my story; it's a long article, and people have a lot of stuff to do besides reading the news. But what you said made me think about the way people consume information in general, not just on this site. My sense is that segments of our voting population (both left and right) rely too much on talking points-- they like to retweet but rarely click the links, so to speak. Absorbing information that way often yields simulacra at best, and propaganda at worst.
Reply  |  Post Message  |  Messages List  |  Start a Board

I was thinking as much as anything about the way I found myself reducing your article to a tweet and a hashtag. People who read the tweet and not the article might have a knee-jerk reaction, if they are suspicious of corporate surveillance.
Reply  |  Post Message  |  Messages List  |  Start a Board

She didn't address this concern categorically, but she did allude to the full scope of privacy concerns, beyond government agencies such as the NSA. She noted in a pretty pointed tone that corporations have much more data about us than the government does, for instance, though she didn't explore the implications. But you're right-- it's something she'll need to address in greater depth if she is going to continue championing big data technologies. Of the technologies she discussed, she spoke most enthusiastically about big data. She spent several minutes arguing that because the U.S. possess one-third of the world's data (not sure how that's quantified), our newfound ability to analyze all that information gives the country a competitive advantage. I think that's a far statement-- but only if the pitfalls you mention are given their due consideration as new technologies are implemented.
Reply  |  Post Message  |  Messages List  |  Start a Board

If Hillary addressed the potential of big data technologies, I hope she also had something to say about its privacy pitfalls -- if not, I think she's wandering into a political minefield.
Reply  |  Post Message  |  Messages List  |  Start a Board
InformationWeek Is Getting an Upgrade!