CGI Federal, the lead contractor on the healthcare.gov website, will not have its contract renewed when it expires at the end of February. The Centers for Medicare & Medicaid Services (CMS) is hiring Accenture to fix the flawed federal marketplace that operates the health insurance exchanges of 36 states. But CGI continues to hold important CMS contracts and has reportedly received $37 million in new business from the agency in the past few months.

Among other things, CGI is a "prime contractor" on the Enterprise System Development (ESD) contract of CMS, according to the company. ESD's scope of work includes "the planning, design, development, testing, implementation, operations coordination, and maintenance for the CMS's automated systems and business application software that integrate hardware, software, and communication technologies," CGI's website says.

[Read our complete coverage of the HealthCare.gov launch here.]

CGI has some other ongoing contracts with CMS, including:

How extensive is CGI's work with CMS overall? According to Influence Explorer, a website financed by the Sunlight Foundation, CGI held CMS contracts valued at $274 million from 2009 to 2013. By comparison, Accenture valued the initial phase of its new Healthcare.gov contract at $45 million, and The Washington Post reported that Accenture was set to receive $90 million from the CMS in the first year.

Mary Lamb, a government healthcare consultant at Suss Consulting in Jenkintown, Pa., declined to speculate on why the CMS would continue to contract with CGI. But she said that the CMS, like many other government agencies, uses a two-part approach to procuring services. First, it qualifies a group of bidders for a particular project such as ESD. Then it puts up certain task orders for bid. Under that system, unless CMS removed CGI's designation as a qualified bidder, the company could continue to compete for future CMS contracts. 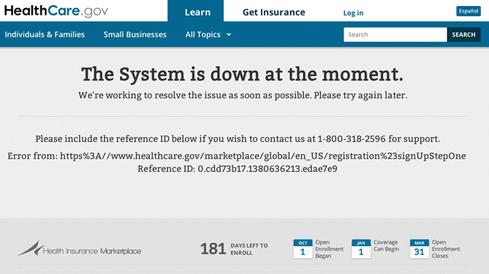 CGI cannot be wholly blamed for the disastrous launch of healthcare.gov, because a number of other contractors worked on the federally facilitated marketplace. Those companies include Equifax Work Solutions, Serco Quality Software Services, and UnitedHealth Group's QSSI subsidiary, which developed the CMS data hub and is now the general contractor for healthcare.gov. (Clarification: This is not intended to assert that those vendors were at fault; only that CGI alone was not responsible for every aspect of the website.) But the Washington Post article pointed out that about half of the "new software code" that CGI has written for healthcare.gov in the past few months has failed. And CGI had not delivered 45% of the website components it was responsible for by Oct. 1, the Post reported.

Accenture, which has been hired to provide "continued technical improvements" to  healthcare.gov for one year, will have its hands full when it comes on board. The website still cannot send enrollment information to state Medicaid agencies when applicants qualify for Medicaid; is still having trouble transmitting enrollment data accurately to health plans; and reportedly cannot yet transmit subsidy payments to health plans.

Accenture has a large footprint in the federal government, including work for the IRS, the Census Bureau, and the Education Department. It has helped several states set up online programs, and it spearheaded the successful launch of California's health information exchange. The latter contract, which was worth $359 million, included the design and implementation of the website as well as continuing development and maintenance.

"Following a transition period on the current program, Accenture will provide services to support the Federally Facilitated Marketplace (FFM) to prepare for open enrollment in October 2014, including 24/7 support of the Marketplace application, eligibility and enrollment functions, generation and transmission of enrollment forms, and features related to special enrollment periods, among other services," said a company press release.

Ken Terry is a freelance healthcare writer specializing in health IT. A former technology editor of Medical Economics Magazine, he also is the author of the book Rx for Health Care Reform.

We welcome your comments on this topic on our social media channels, or [contact us directly] with questions about the site.
Comment  |
Email This  |
Print  |
RSS
More Insights
Webcasts
Unlocking the Ultimate Source of Truth in Cloud Security--Network Data
SecDevOps: Tying Security to Your Application Development Processes
More Webcasts
White Papers
When and How to Best Leverage an MSSP
An Integrated Approach to Embedding Security into DevOps
More White Papers
Reports
How IT Security Organizations are Attacking the Cybersecurity Problem
State of Endpoint Security: How Enterprises Are Managing Endpoint Security Threats
More Reports

Ken has it right that the only a handful of firms have the expertise to navigate the gauntlet of federal procurement rules and ALSO deliver at the scale required by the federal government.  That's why CGI Federal was found to be the best technical applicant at the time when it bid on the HealthCare.gov project, even thought a closer look at its past performance should have shot up warning flares.

The big question now is, can Accenture realistically repair the foundation, establish the necessary ties with the remaining contractors and begin engineering the fixes HealthCare.gov really needs at the price tag and on the schedule it has agreed to with CMS?
Reply  |  Post Message  |  Messages List  |  Start a Board

While Accenture is no group of slouches I do wonder if they have taken a very long look at the health care site and started negotiating based on what it will take to fix and maintain what CGI already did.  Many times and I suspect this is true with HealthCare.gov coming in second and facing all of the angry stake holders is harder than being the company that failed to deliver.  Accenture is going to be expected to deliver some fixes NOW and without the benefit of being able to say "this hasn't been done before".  They will be doing as much clean up as they will be doing new work and the clean up is a no win situation so I feel for anyone working on that project.
Reply  |  Post Message  |  Messages List  |  Start a Board

That's true, but it's also the big, connected firms that seem to sail right on. David Blumenthal and others have spoken about this and how the vendors selected for government projects seem to be those that are best at navigating the procurement maze. Accenture is one of those companies, too, but it has done very little work for CMS up to now. Maybe it will bring a fresh perspective to the healthcare.gov mess.
Reply  |  Post Message  |  Messages List  |  Start a Board

Seems better than this firm deserves. You have to screw up really big to escape the consequences.
Reply  |  Post Message  |  Messages List  |  Start a Board
Editors' Choice
Hot Topics