Digital technologies have transformed the relationship between governments and citizens and the services that governments provide. However, a new comparative study finds that, despite having some of the most highly evolved government digital services in the world, the US ranks sixth among 10 leading nations in overall digital performance and ninth in citizen satisfaction with digitally provided services.

"The United Kingdom and United States are ahead in terms of Service Maturity, but not in terms of engagement," said the authors of the study, released by Accenture. "We found that these countries are focusing on driving efficiencies and cost cutting, which may be seen by their citizens as government centered, rather than being truly citizen centered."

Singapore, Norway, and the United Arab Emirates ranked highest in delivering government services digitally. In addition to the US, the study examined digital government and satisfaction trends in Brazil, Germany, India, Norway, the Kingdom of Saudi Arabia, and the United Kingdom, polling 5,000 citizens.

The study found three distinct approaches to the way governments invest in digital services. These approaches tend to reflect the maturity of the governments' digital efforts and how satisfied citizens are with their government interactions.

1. Cutters: These governments focus on reducing their costs to address budget strains (the US and the UK).

Singapore, Norway, and the UAE have mastered all three approaches, the study found. This helped them earn higher citizen satisfaction scores. India, Brazil, and Germany ranked at the bottom of the list, scoring lower on measures of service delivery experience, access, and citizen centricity. 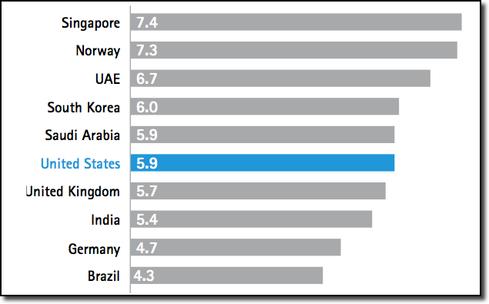 The US has developed a mature system for delivering digital services but suffers from low levels of citizen satisfaction.
(Source: Accenture Digital Government study)

The US ranked first among peer nations in the maturity of the digital services it delivers. The study found the US government earned top performance marks for delivering services through multiple channels, for developing citizen-centric interactive services, and for being proactive in its communication and education efforts. 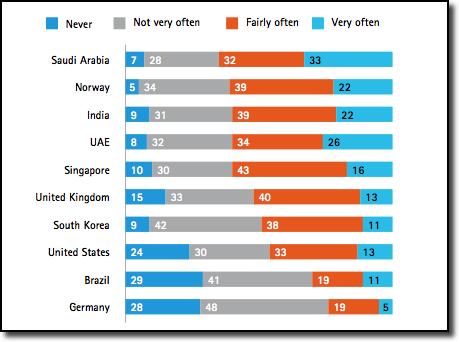 Roughly three-fourths (76%) of US respondents said they wanted to see more services provided online. What's more, US citizens had a low level of confidence in the government's ability to deliver public services that meet their needs and expectations in the future, ranking it near the bottom of the 10-nation survey. This was due to

multiple segments of the population feeling uncomfortable with new technologies, the study said. But it also noted that the low use of digital government services also worked to the disadvantage of the US government's goals to improve efficiencies. 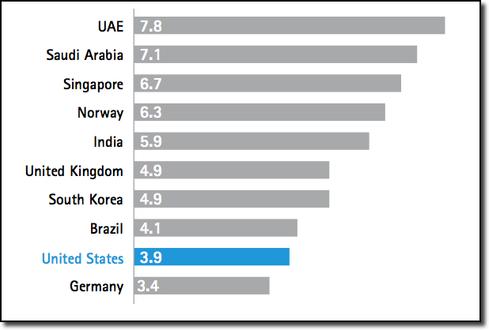 US citizens don't have much confidence in their government's ability to deliver public services that will meet future needs.
(Source: Accenture Digital Government study) 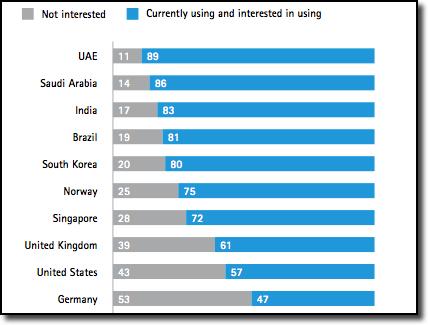 Citizens in Saudi Arabia, Brazil, India, and the United Arab Emirates are the most open to using social media to interact with government in the future.
(Source: Accenture Digital Government study)

When asked what steps their government should take to improve digital services, US respondents said the top priority should be to provide services in a more cost-effective way. The second priority was to plan for the long term, and the third priority was to better understand the needs of citizens and communities.

"Citizens' hopes and intent about public service for the future expresses a strong argument for governments to expand service provision through digital channels," the study said.

These five higher education CIOs are driving critical changes in an industry ripe for digital disruption. Also in the Chiefs Of The Year issue of InformationWeek: Stop bragging about your agile processes and make them better (free registration required).

Wyatt Kash contributed to the reporting on this story.

William Welsh is a contributing writer to InformationWeek Government. He has covered the government IT market since 2000 for publications such as Washington Technology and Defense Systems. View Full Bio
We welcome your comments on this topic on our social media channels, or [contact us directly] with questions about the site.
Comment  |
Email This  |
Print  |
RSS
More Insights
Webcasts
The Failures of Static DLP and How to Protect Against Tomorrow's Email Breaches
How Elite Analyst Teams are Transforming Security with Cyber Reconnaissance
More Webcasts
White Papers
Cyber Threats & Trends: Jan-June 2020
All In, Online Gaming & Gambling
More White Papers
Reports
How Data Breaches Affect the Enterprise (2020)
The Future of Multi-Cloud Networking 2020
More Reports
Copyright © 2021 UBM Electronics, A UBM company, All rights reserved. Privacy Policy | Terms of Service