12 Open Educational Resources: From Khan to MIT
(click image for slideshow)
Since Ellen Yu Borkowski became chief information officer at Union College in November 2010, she has had to broaden her focus to all the things a CIO must care about, such as security and bandwidth and budgets and winning "a seat at the table" for strategic discussions. Yet the thing she cares most about is making technology more useful to the academic missions of the university: teaching and learning.

Founded in 1795 in Schenectady, Union College was the first institution of higher learning chartered by the New York State Board of Regents. Today, it's known as a small liberal arts college that happens to include an engineering school and that supports a strong study-abroad program. Borkowski earned an bachelor's degree in computer and system engineering at Rensselaer Polytechnic Institute in nearby Troy, but she spent most of her career at the University of Maryland working to improve academic computing systems, particularly their usability.

The key turning point in her career came almost by chance, she said. After graduating from RPI, she worked for a couple of years in industry. As a programmer for a defense contractor, she created software to support engineers who were designing engines. One day in the library, she happened to notice an advertisement on the back cover of a magazine for the User Interface Strategies conference organized by Ben Shneiderman, a computer science professor at the University of Maryland and founder of its Human-Computer Interaction Lab.

She went to study with Shneiderman, who later got her a job at the university working on the design of a "teaching theater" funded with a grant from AT&T. The concept was to put a computer on every desk and "change the lecture from a passive activity to an interactive one," Borkowski said. "I quickly became engaged with the idea of using technology to make teaching and learning better. The funny thing for me is a lot of what we worked on then is coming back. It's different technology now, but it's the same concepts." 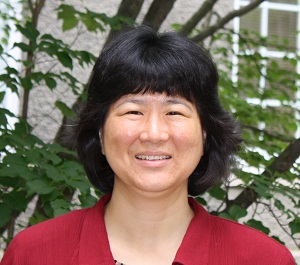 "It was very clear back then that the killer app was the network," she added. "It was the ability to connect students and share information in an instant, which is now something we do every day on the Internet." At the time of those early experiments, it was necessary for her team to create its own custom networked learning tools. For example, one was a "one-minute" assessment tool that prompted students to quickly type in the answer to an instructor's question. The responses would then be displayed to the entire group, anonymously, allowing the instructor to quickly divine how many of the students had learned that particular topic and how many were confused.

Today, similar quick-assessment challenges are often handled with commercially available clickers, Borkowski said, and it's no longer necessary to build a special room to enable basic interactivity. "Now we have networking in the classroom, so all you need are the collaborative tools," she said.

Yet a basic challenge that remains is designing instructional technologies that make it easier for teachers to teach, rather than getting in the instructor's way, she said.

Borkowski worked her way up through a series of increasingly senior posts at the University of Maryland related to instructional technology and academic systems, ending up as director of academic support. Along the way, she also picked up a master's degree in education policy, planning and administration. "I wanted a better grounding in educational theory," she said.

Becoming a CIO has forced Borkowski to change gears. At each stage of her career, she worked with higher-level enterprise systems, she said, "but now it's not just for teaching and learning -- although that's where my heart is -- it's for everything. I'm looking at business processes and how we can be more efficient using technology. I want to look at [whether there] are better ways to help with advising, not just in the classroom but outside the classroom. There are all these other aspects of the institution that I was not involved in when I was at Maryland."