In a lawsuit against the state, Oracle claims it is the victim of a smear campaign designed to obscure the state's project management failures.

Tired of being a punching bag, Oracle Corp. is hitting back at the State of Oregon over claims that the software company and the contractors it provided were responsible for the failure of the state's health insurance exchange to produce a functioning self-service website.

According to the lawsuit filed Friday, the state has been using a smear campaign to deflect attention from its own project management failures -- particularly constantly changing, never-finalized requirements that sabotaged the software development process. In addition to suing for unpaid consulting and licensing fees, Oracle used the filing to defend its reputation. "When the press reported that the exchange was not accessible for consumer self-service on October 1, 2013, public officials chose not to give a measured, fully informed response," the filing says. "Cover Oregon and public officials could have done two things in the face of those press reports: (a) own up to the management and technical challenges they had encountered and commit to a plan for resolving them; or (b) blame someone else. They chose the latter, and they fixed their sights on Oracle."

Independent investigations have cited the state's excessive reliance on Oracle as the turnkey provider of software and consulting services for the insurance exchange as one of the underlying causes of project failure. The software infrastructure for the project included Oracle Policy Automation, Siebel CRM, as customized and combined through the Oracle Enterprise Architecture. However, the project's auditors also put a large share of blame on the state for the way it managed the project. One of the main points Oracle hammers home is that it never had either the authority or the responsibility to act as the system integrator on the project. Though Oracle was a major player in the project, it was not the only contractor or technology provider, and the accepted best practice would have been for all of them to report to an integrator that could have acted as the general contractor. 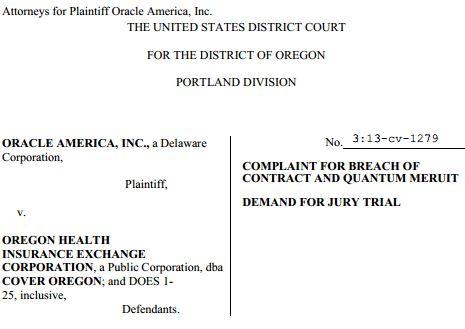 The state elected not to hire a system integrator, instead choosing to assign that responsibility to its own personnel -- whom Oracle says were not up to the challenge. Project oversight responsibilities were actually split among several state organizations -- and shifted partway through the project from the Oregon Health Authority to the Cover Oregon organization created to run the exchange -- adding further confusion.

"Without a fixed scope for the project -- the equivalent of architectural blueprints -- no contractor could reasonably be expected to agree to work on a fixed-fee basis," Oracle states. Only the state organizations "could resolve the uncertainties regarding the overall scope and structure of the massive project, and because only Cover Oregon and the state agencies could demand changes in the project, those entities properly bore the inherent risks associated with failing to resolve them in a timely way."

Oregon Gov. John A. Kitzhaber, MD, has called for the state to sue Oracle, alleging that sloppy work by its contractors was a major cause of the insurance exchange's downfall. However, an analysis of the legal issues by The Oregonian newspaper concluded that Oregon would face an uphill battle to make the charges stick in court. Oracle also notes that the state has yet to file a lawsuit, suggesting that Kitzhaber's bluster is mostly about politics and public relations.

An enthusiastic backer of the expansion of access to health insurance under the Affordable Care Act, Kitzhaber made Oregon one of the first states to commit to creating its own online health insurance exchange and set ambitious goals for the project. Yet even though several other states that built their own insurance websites also failed to live up to expectations, Oregon alone failed to process a single self-service application online (instead funneling all applications through intermediaries). The federal HealthCare.gov exchange also failed to perform adequately for months after open enrollment began in October 2013, but it recovered in early 2014 after an intensive rescue by a SWAT team of developers.

Oregon now plans to abandon the online system created by Oracle and rely primarily on HealthCare.gov to provide the health insurance exchange services for its residents when open enrollment resumes in November.

Oracle claims that it didn't have to be that way. "By February 2014, a health insurance exchange website existed that included the citizen self-service functionality," Oracle's filing claims. "Cover Oregon did not disclose that information to the public and did not open the working self-service portal for individuals, for unexplained reasons of its own." State officials have said the software was still too buggy for public release and never rose to an acceptable level of quality.

The real bone of contention is over the cause of the bugs and the general dysfunction surrounding the project. Oracle leans heavily on reports filed while the project was under way by Maximus Inc., a contractor that the state retained specifically to monitor the project and the risks associated with it. Maximus kept reporting that the project faced a high risk of failure, and that state officials were not coordinating their oversight effectively.

In one section of its legal complaint, Oracle particularly points to infighting between the Oregon Health Authority (OHA) and Cover Oregon (CO):

For example, at one point, the OHA's chief information officer complained to Oracle personnel that Cover Oregon's efforts were "becoming highly disruptive to the Modernization effort," and that her team felt "they are being run over" by Cover Oregon. As a result, one organization would make decisions without taking account of implications of that decision for the work being performed for the other organization; the result was

Yes, one big debacle with Healthcare.gov -- but I guess that was finally resolved, more or less (although I haven't heard anything particularly reassuring about security) -- would have been more than enough! The answer, I think, lies in the political hash surrounding Obamacare and the related technologies. Since states have a big say in how to participate, it's not too surprising that some chose to fly solo for whatever reason. It would, however, have been much more efficient to design one national system from a technical and admin POV.
Reply  |  Post Message  |  Messages List  |  Start a Board

That's true: Government employees and elected officials don't own finger-pointing! I feel badly for Oracle, too, although each time one of these stories comes up -- about huge, expensive tech implementations without an assigned integrator to lead the project -- I wonder how neither Oracle nor Oregon figured that out at the beginning. I guess the allure of the contract was too big, but entering into this kind of pact without taking on the integrator role seems fated for failure.
Reply  |  Post Message  |  Messages List  |  Start a Board

David, Definitely. The point about working without a blueprint is valid. Makes one sympathetic to the concept that IT as a discipline needs to mature to the level of civil or electrical engineering. Imagine if this level of disfunction went on in bridge construction? And the state could probably have built several bridges with what this fiasco cost.
Reply  |  Post Message  |  Messages List  |  Start a Board

This situation encapsulates much of what is wrong with government -- lack of accountability, failure to use even basic private-sector best practices like change management, energy spent trying to dodge blame and score points rather than fix the problem. And politicians from local to federal wonder why their popularity is about on par with head lice, as Stephen Colbert recently discussed.

It's incredibly disheartening to people who understand how important effective governance is in today's complex and global world.
Reply  |  Post Message  |  Messages List  |  Start a Board

Can you imagine yourself as an Oracle consultant working on this project, juggling changing requirements? Does it make you feel more sympathy for the big, bad software company?
Reply  |  Post Message  |  Messages List  |  Start a Board
InformationWeek Is Getting an Upgrade!