The National Science Foundation (NSF) has awarded $15 million to three projects that are developing, deploying, and testing future Internet architectures -- including networking concepts and communications protocols -- in real-world environments.

The projects, which involve research groups from multiple universities, focus on "novel network architectures and networking concepts that extend beyond current networking components, mechanisms, and application requirements," according to the Directorate for Computer and Information Science and Engineering (CISE), a division of the NSF.

The awards build on four projects that were funded in 2010 through the NSF Future Internet Architectures (FIA) program. Those projects -- MobilityFirst, Nebula, eXpressive Internet Architecture, and Named Data Networking -- were given $8 million over three years to build a more robust Internet. Each has designed pilot versions of new networks and tested them in limited settings.

"It's important to think about the Internet in terms of security issues. The Internet started when things were simple and communication was between trusted partners. The demands have changed, become much more complex with communication among friends, but also, for example, unknown entities, malicious parties, and non-animate machines and sensors. Too often security is added on, but the FIA projects were required to build security into the architecture to help make communication intrinsically more secure," Darleen Fisher, NSF program director who oversees the FIA program, says in a phone interview.

The goal of the next phase, announced in mid-May, is to progress the networks from the design stage to the pilot stage for testing within challenging, real-world environments. MobilityFirst, Expressive Internet Architecture, and Named Data Networking are the three projects that have moved on to the next phase of the program. Cities, nonprofits, academia, and industrial partners will be working with researchers in each group to test the new designs. 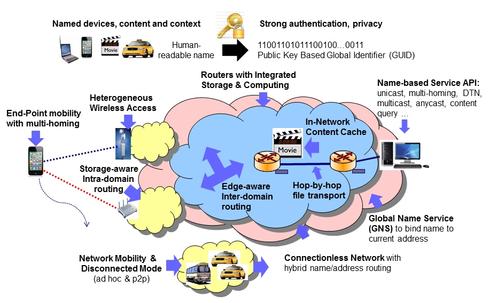 MobilityFirst will be tested in three network environments. The first is a mobile data services trial with wireless Internet service provider 5Nines in Madison, Wis. The second is a content production and delivery network trial with WHYY and other public broadcasting stations in Pennsylvania. The third involves a context-aware public service weather-emergency notification system that serves the Dallas-Fort Worth area.

The NSF wants to see the projects make the transition from early prototypes to more sophisticated architectures in the near future. "Two important goals of the FIA effort are to grow a cadre of researchers -- including students -- who are experts in network architecture and large-scale systems design and to create intellectual capital to meet the networking needs of the 21st century," says Fisher.

"We're hoping these networks will get traction and potentially be used by enterprises. However, if any of these projects generate interesting ideas that are incorporated into the current Internet, that would in itself would also be a great achievement."

Elena Malykhina began her career at The Wall Street Journal, and her writing has appeared in various news media outlets, including Scientific American, Newsday, and the Associated Press. For several years, she was the online editor at Brandweek and later Adweek, where she ... View Full Bio
We welcome your comments on this topic on our social media channels, or [contact us directly] with questions about the site.
Comment  |
Email This  |
Print  |
RSS
More Insights
Webcasts
Data Protection 101 - 12/10 @ 11am EST
Defense and Response Against Insider Threats & User Errors
More Webcasts
White Papers
Seeing Around Corners
Flying Blind in Third-party Ecosystems
More White Papers
Reports
2020 Trustwave Global Security Report
Special Report: Understanding Your Cyber Attackers
More Reports