United Arab Emirates officials are laying the foundation for a national identity verification system that could change how people are ID'd for everything from passports to employment documents.

Governments around the globe continue to invest billions of dollars annually trying to deliver on the promises of electronic government and increasingly on the concept of "smart" government. Public leaders now look to a time -- some say by the end of the decade -- when integrated IT systems will automate a significant portion of government services to the public.

The road to smart government, however, is littered with debris from failed efforts, the US government's healthcare exchanges being just the latest example. In many ways the road itself is still being built.

Agencies routinely lack both the financial resources to upgrade their aging IT systems and the political will to share information openly with other government agencies. Even agencies that have mastered online services now face the need to reengineer their processes and deliver services to citizens the way the rest of the world seems to work, via mobile smartphones.

One challenge, however, continues to undermine the progress of most countries' e-government initiatives: That's the need for a reliable system to manage the digital identities and private information of citizens securely -- and the need for infrastructure to integrate various government databases on the back end so that individuals receive all, and only, the services to which they are entitled.

That's why a national identity card project making headway in the United Arab Emirates, and the project's leader, Ali M. Al-Khouri, director general of the Emirates Identity Authority (EIDA), are both worth watching. 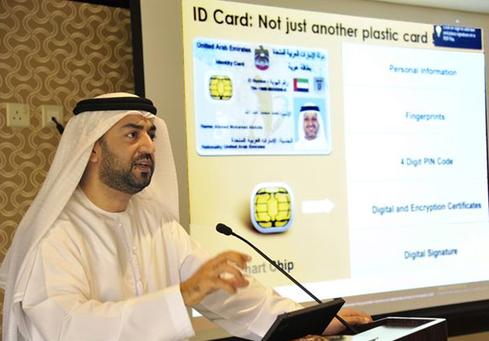 I met Al-Khouri in late April while attending the Gulf region's first Open Government Data Forum, co-sponsored by the EIDA, the United Nations Public Administration Network, and the UN's Department of Economic and Social Affairs. Al-Khouri has earned an international reputation over the past two decades for pioneering the use of technology in government and for authoring more than 80 technical articles on technology and identity management. He still finds time to serve on the faculty at the British Institute of Technology and E-commerce in London.

The UAE government tapped Al-Khouri in 2009 to take over an ambitious project, begun in 2004, to build a national population register and the underlying systems to process passports and birth and death certificates electronically, along with entry, residence, and employment documents for UAE citizens and the nation's rapidly growing population of expatriates. Officials also envisioned that real-time population data would help the government make better investment decisions.

The project got off to a bumpy start. A year after Al-Khouri became EIDA's managing director the agency had enrolled only 14% of the population and was realizing its challenge was as much about retailing as it was technology.

While smartcards are very useful in many contexts, for the average consumer - and potentially, EID - this technology is likely to be eclipsed by two technological shifts:

What makes the FIDO technology interesting is that it encompasses all functions of the smartcard for strong-authentication, does not require a smartcard reader, works with desktops, laptops, smartphones, tablets, etc., AND preserves privacy for consumers when authenticating to any FIDO enabled site.

Smart Phones, Tablets etc are all devices and cannot be directly used to serve the purpose of primary identity instruments.

A National ID Program is meant to provide certified credentials for an individual to be able to assert his/ her identity on demand. The key here is that such credentials are provided by the Government and thus serve as highly trusted identification tools, especially when the authenticity is verifiable online. The UAE National ID Program is also one such program which identifies a person with biometric and biographic details provided during the national enrollment. The credentials then are packaged as a pair of Digital Certificates, biometric data along with biographic data into a Secure Smart Chip.

This serves as the primary Digital ID for an individual and can then be used to acquire multiple derived identities in the form of lets say SIM Cards, credentials for use on tablets, browsers etc. This linkage to the primary digital ID (National ID Card) exponentially increases the security in the identification systems used for Smart Phones.

The Fast ID Online (FIDO) initiative is also based on the same concepts used in the UAE National ID Card in terms of the multi factor authentication. Ultimately, it is standardization and interoperability that serve as the key for Diigtal Identity and Authentication in the scheme of a multitude of personal identification schemes. It is here that Government backed and provided Identification programs are expected to make a difference.

We would be happy to provide any further details.
Reply  |  Post Message  |  Messages List  |  Start a Board

interesting info, as problem of the  Nation ID facing by many gov. uncliding Canada... but at least UEA trying and they have money to spend... and after other countries could follow... proven solution...
Reply  |  Post Message  |  Messages List  |  Start a Board

Oh good, the US is considering yet **another** national ID card (in addtn to soc. sec.) to further put its citizens lives and data in peril.  I was afraid that data security was actually being taken seriously.
Reply  |  Post Message  |  Messages List  |  Start a Board
Editors' Choice
Hot Topics

10 IT Trends to Watch for in 2021 Cynthia Harvey, Freelance Journalist, InformationWeek,  12/22/2020
White Papers
How to Prioritize Risk Across the Cyberattack Surface
The Insecure State of Microsoft Teams Security
The 2020 Duo Security Trusted Access Report
Cyber Threats & Trends: Jan-June 2020
How to Compete in Financial Services IT