Former US Cyber Command and National Security Agency (NSA) head Gen. Keith Alexander delivered sobering messages about managing cyber risks at an event Tuesday. The amount of information worldwide is increasing at a colossal rate. Technology is updating approximately every two years. The top 10 in-demand jobs in 2014 didn't exist in 2004, so today's students are preparing for jobs that don't yet exist and will use technologies that haven't yet been invented. Meanwhile, cyber threats are evolving and becoming more sophisticated.

Alexander, who now runs a firm called IronNet Cybersecurity, was the keynote speaker at the event hosted by PwC in New York City. In order to address the growing threats, Alexander said there needs to be cyber-security legislation, real-time or near-real-time situational awareness, and better training at the "defense" level.

"One of the biggest things I saw as the director of the NSA is we trained our offense at one level: these guys get world-class training and capabilities. Our defense [is] guys that are taught IT and how to bring networks up, but they aren't taught how to go against the adversary," said Alexander. "We've got to come up with a program that trains our defenders and those that operate the networks to understand exactly what's coming at them."

"If the small and midsized companies are grouped together and they have this great cyber-security as a service capability, they're not the downstream problem for the large companies. In fact, they become part of the sensing fabric that help protect the big industries -- which they can't do today. This capability would greatly improve our cyber hygiene," said Alexander. 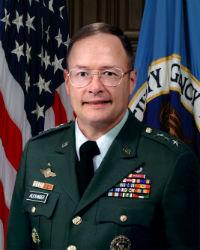 According to the survey, as security incidents grow in frequency, the costs associated with managing and mitigating breaches also increase. The estimated reported average financial loss from worldwide cyber-security incidents was $2.7 million in 2014, which is a 34% increase over 2013. However, global information security budgets have decreased 4% when compared with 2013.

With increased incidents and heightened regulations, corporations and government agencies are scrambling to safeguard their data and networks. There needs to be a shift from security that focuses on prevention and controls to a risk-based approach that focuses on organizations' most valuable assets and biggest threats, the survey found.

Additionally, the survey highlighted some efforts launched by the federal government to help organizations improve their cyber-security position on a voluntary basis. One example is the National Institute of Standards and Technology (NIST) cyber-security framework, which stemmed from a 2013 Obama Administration executive order. The framework is labeled Version 1.0 and is being implemented by individual companies to assess and improve cyber security.

When it comes to regional governments, however, state chief information security officers (CISOs) feel that insufficient funding (75%), sophisticated threats (61%), and shortage of skilled talent (59%) all threaten security, according to a separate new study by Deloitte and the National Association of State Chief Information Officers (NASCIO).

While the role of state CISOs continues to gain validity, they are concerned about the intensity, volume, and complexity of cyber threats, given that state information systems contain sensitive citizen data and are more susceptible to attacks. According to NASCIO chair Doug Robinson, a major challenge facing states is "how to both focus on the immediate need of securing their ecosystems against imminent threat, while maturing their cyber-security program that covers protection, early detection/containment, and ability to bounce back from incidents."

Considering how prevalent third-party attacks are, we need to ask hard questions about how partners and suppliers are safeguarding systems and data. In the Partners' Role In Perimeter Security report, we'll discuss concrete strategies such as setting standards that third-party providers must meet to keep your business, conducting in-depth risk assessments -- and ensuring that your network has controls in place to protect data in case these defenses fail. (Free registration required.)</p

Elena Malykhina began her career at The Wall Street Journal, and her writing has appeared in various news media outlets, including Scientific American, Newsday, and the Associated Press. For several years, she was the online editor at Brandweek and later Adweek, where she ... View Full Bio
We welcome your comments on this topic on our social media channels, or [contact us directly] with questions about the site.
Comment  |
Email This  |
Print  |
RSS
More Insights
Webcasts
Building and Refining Threat Hunting Practices in Your Enterprise
Now That Ransomware Has Gone Nuclear, How Can You Avoid Becoming the Next Victim?
More Webcasts
White Papers
Etsy Engages Global Community with a High-Performance Data Platform
WFH Is Dead. Long live WFA. But What Does that Mean for IT?
More White Papers
Reports
Special Report: Why Performance Testing is Crucial Today
2020 State of DevOps Report
More Reports

I found this rather telling:  "One of the biggest things I saw as the director of the NSA is we trained our offense at one level: these guys get world-class training and capabilities. Our defense [is] guys that are taught IT and how to bring networks up, but they aren't taught how to go against the adversary," said Alexander. "We've got to come up with a program that trains our defenders and those that operate the networks to understand exactly what's coming at them."

Sports teaches it again and again, that you can't win games without both offense AND defense! It's distressing to think that the people defending the country aren't nearly as well-trained as those that are attacking other countries. (at least as it pertains to cyber-attacks)
Reply  |  Post Message  |  Messages List  |  Start a Board
Editors' Choice
Hot Topics