Steerage To The Stars: The Cheapsat Revolution - InformationWeek

11 comments
Comment Now
As the cost of putting small digital satellites in orbit continues to fall, what can these little explorers do? Businesses, agencies, and scientists want in. 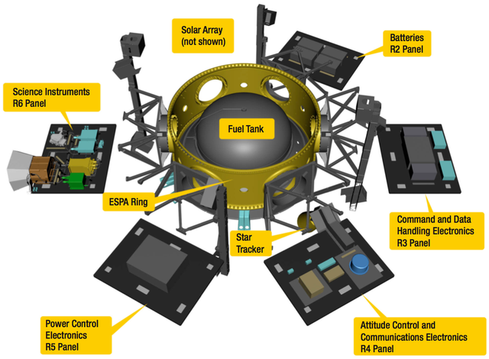 Secondary payload adapter
Originally developed for the Evolved Expendable Launch Vehicle (EELV) project that created the Delta IV and Atlas V rockets, the ESPA (EELV Secondary Payload Adapter) is a standard interface that sits between the topmost stage and the main payload, and can deploy up to six 180-kg satellites for a fraction of the cost of launching them separately. A commercial derivative, the SSPS, is manufactured by Moog CSA Engineering. Already, a majority of the world's operating big lifters are ESPA-compatible.

Sane, that's certainly one of the institutional problems at the moment. Rockets get better, satellites get cheaper, and secondary launch spreads the cost, but on the other hand that also means losing one rocket (rare as that may eventually be) could mean losing dozens of satellites. And some launch times are essential (say an observation satellite to take dedicated pictures of some rare event) and others are completely slippable.  So the whole thing is a huge headache for insurance, even if you're big enough (or desperate enough) to self-insure.

It sounds like our current problem with "cheapsats" isn't the satellite itself it is getting it to a useful place.  The mention of SpaceX and the issues with who takes responsibility when your satellite's ride falls short would be enough to make the finance guys cringe when you start talking about possible loss.  I can imagine a conversation that goes like "we spent 5 years getting funding for this satellite and you're saying that if the rocket carrying it explodes that we are responsible for the loss?".
Reply  |  Post Message  |  Messages List  |  Start a Board

I was more interested in the cheap than the small aspect of things, UberGoober. Sometimes in its early stages high tech is fairly cheap because the stuff to spend the money on doesn't exist yet, so surprising amounts of pioneering tech is surprisingly cheap.

That's also one of several reasons why fiscal conservatives like Eisenhower and Nixon didn't like the nascent space program much; they could see it was a camel's nose, or the first step on a slippery slope.  If you could send a grapefruit or a pumpkin that went "beep" into low earth orbit at just the cost of some spare military hardware, that was fine with them (well, not that fine -- see why the Jupiter was not the first satellte launch in 1956).  But it ran the "risk" of creating both industry and customers for something much more expensive to send the equivalent of a VW Microbus to the moon, or even a Beechcraft Bonanza or DC2 to low Earth orbit -- and once that capacity existed, it was going to be expensive.


Cheap tech in a relatively mature technology, like secondary launch today, also creates new markets, but probably leads down rather than up the cost laddder.


So I suppose I'm arguing that the pre 1960 "cheapsats" were a different kind of cheap than the post 2000 ones.

More like an orbital critter crawl (those engineering school contests in which teams build fighting robots) and a prize structure for it. For the right bounty structure, you could get a lot of small companies and college programs up there using cheapsats to knock space junk down or out (obviously you also need to pay the "space critter" company enough to make sure it gets rid of the "critter" at the end of its life.) And once you have enough working critters up there and space junk problems have been rolled back in at least the more important scientific and commercial orbits, your next step is probably a "bottle law" (i.e. launching companies put money in escrow which they can get back whenever their junk deorbits -- or anyone else can get by deorbiting it for them).
Reply  |  Post Message  |  Messages List  |  Start a Board

Appropriately enough, some of the solutions for space junk involve cheapsats: using magnetic loops, small maneuvering engines, and thrust acquired by pushing against junk, a trash-can-sized robot could throw as many as a dozen identifiable bits of junk down into the atmosphere every year.
Reply  |  Post Message  |  Messages List  |  Start a Board

While unquestionably true, what you say has no bearing on my comment. You might as well disallow comparisons between a Motorola 3000 and a Galaxy S5.  Of course technology changes rapidly, but it is still instuctive to think about how things are different from what went before.

This is certainly such an example of this.  For the US the issue wan't what we wanted to orbit, it was loft capacity.  Vanguard 1, for instance, only weighed a few pounds, and didn't included a vast array of scientific ge-gaws for the simple reason that it would have splashed into the Atlantic if they had tried to orbit anything remotely like a modern research satellite.  It housed a temperature sensorr and couple of VERY low powered radios, including one powered by the first solar cells on a deployed satellite, and we were happy to be able to get even that much on orbit.  The Soviets had bigger launch vehicles at the time, and ccould get a lot bigger payload on orbit, but we needed to have at least a credible also-ran in the early 'space race.'  The Reds included, in general, more functions in their early satellites beacuse thay could launch more mass than we could, though that situation would change over the next decade.

I suppose you could say that 'if only they had a Saturn V bootster...' but a deus ex machina argument like that voids the lessons of the comparison.

One of the peculiar problems in comparing the high tech of different eras is that in earlier times they just didn't have the option of buying things that are off the shelf for us. Captain Cook could have done a lot with nylon sails and duralumin or even Fiberglas hulls, Faraday badly needed a working wall socket, and Turing or Oppenheimer could have shortened the war by quite some margin if they'd been able to buy a few hundred laptops at Best Buy. But none of that was available at any price so they didn't spend the money.
Reply  |  Post Message  |  Messages List  |  Start a Board

This sounds like kind of cost-cut breakthrough that has unleashed DNA analysis and research that used to take years and cost millions. On thought of concern is that commercial space enterprises unleashed will put so much space junk aloft it will endanger more critical satellites and future maned space missions. I've read that space agencies are already worried about that problem and are stuggling to keep track of all the objects in Earth's orbit.
Reply  |  Post Message  |  Messages List  |  Start a Board
Page 1 / 2   >   >>
Editors' Choice
Hot Topics

Northwestern Mutual CIO: Riding Out the Pandemic Jessica Davis, Senior Editor, Enterprise Apps,  10/7/2020
White Papers
DevOps for the Database
Account Takeovers - How Organizations Try to Prevent Them & Why it's Not Enough
SANS Report: Measuring and Improving Cyber Defense Using the MITRE ATT&CK Framework
How to Build Your Own CDN
Navigating Digital Transformation During a Pandemic