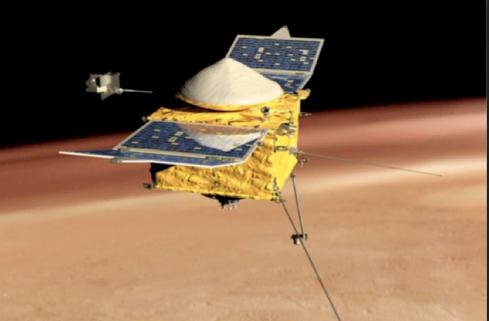 MAVEN, which was launched aboard a United Launch Alliance Atlas V 401 rocket, began a 10-month journey that will eventually bring it into orbit around the Red Planet in September 2014 to capture ultraviolet images of the entire planet and gather a variety of measurements.

MAVEN is equipped with three instrument suites for evaluating the Martian atmosphere. The particles and fields package, built by the University of California, Berkeley/Space Sciences Laboratory, is made up of six instruments that will examine the solar wind and the ionosphere of Mars.

The remote sensing package, built by the University of Colorado Boulder/Laboratory for Atmospheric and Space Physics, contains the Imaging Ultraviolet Spectrograph (IUVS), which will measure the global characteristics of the planet’s upper atmosphere and ionosphere.

The last package, consisting of the Neutral Gas and Ion Mass Spectrometer (NGIMS), will measure the composition and isotopes of neutral ions. NGIMS was developed by the Goddard Space Flight Center.

[Look at some of the Mars rover's achievements, as NASA celebrates Curiosity's first anniversary on the Red Planet. See: NASA Curiosity Rover's Year On Mars: 5 Breakthroughs]

All these components are essential to the one-year mission, which will “allow scientists to characterize the current state of the upper atmosphere and ionosphere, determine the rates of loss of gas to space today, and extrapolate backward in time in order to determine the total loss to space through time,” according to a NASA document detailing the mission. Scientists particularly want to know how a planet that possibly contained microbial life -- with an atmosphere warm enough to support water -- turned into a barren desert.

The 37-foot spacecraft, developed by Lockheed Martin, builds on past Mars orbiters. It is solar-powered and has a high-gain antenna that points to Earth for communications sessions. MAVEN will work with other missions dedicated to exploring the habitability of Mars, such as the Curiosity rover. When collecting samples on Mars, Curiosity found carbon, hydrogen, oxygen, phosphorus, and sulfur, which are all key ingredients necessary for life.  The question scientists hope that MAVEN will answer is what happened; where did the atmosphere, and the water, disappear to?

We welcome your comments on this topic on our social media channels, or [contact us directly] with questions about the site.
Comment  |
Email This  |
Print  |
RSS
More Insights
Webcasts
Enterprise Database Strategies for 2020
Securing Active Directory the Way it Deserves
More Webcasts
White Papers
CyberSecurity Trends 2020
[eBook] Stronger as One: The Case for Collective Defense
More White Papers
Reports
The Threat from the Internet--and What Your Organization Can Do About It
CyberSecurity Trends 2020
More Reports

IT Career Paths You May Not Have Considered Lisa Morgan, Freelance Writer,  6/30/2020
White Papers
Container Security Best Practices: A How-To Guide
CyberSecurity Trends 2020
[eBook] Stronger as One: The Case for Collective Defense
Bring Your Network To Your Employees
Why Artificial Intelligence Isn't Good Enough